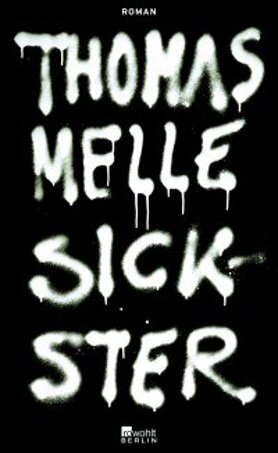 Three people meet who life has thrown off course. Or were they on the wrong track from the very beginning? Magnus Taue, for example, “the nervous supertasker, with a fragile appearance, fine-limbed and over-sensitive: even before hitting puberty he was already a sort of seer, half autistic and half Tourettes." This sort of thing never ends well. In the eyes of the person who is mentally ill, it’s everyone else who is mad, whilst he believes himself to be in possession of a higher truth.

This is also the standpoint from which Thomas Melle operates in his debut novel. Its sickness is already evident in its title. The book is radical, powerful and dark, though the first third arouses the suspicion that Melle, born in 1975 and already attracting high praise for his 2008 short story collection “Mass”, is simply presenting a highly successful case study, from which we can draw conclusions about how individuals are overburdened in the treadmill of the neo-liberal economic world.

This is the story of Thomas Kühnemund, who works in the Berlin head office of an international mineral oil company, evaluating marketing statistics and user-analyses, in order to maximise profits for individual outlets. Put more simply: he stipulates which shelf in the service station the coke bottles should go on, and where the alcopops should be. Thorsten is a wreck: deadened by the media's flood of sexualised images, a constant porn film playing in his mind, driven to alcoholism by the demands of work, he still just about manages to stay on top of it all: relationship, affairs, job. Just about. Still. It’s getting undignified, and he knows it. He washes his knowledge down with anything that happens to be available - and there's always something available. Apple schnapps, beer, Jägermeister, vodka Red Bull. The last option above all: the fuel of choice for the ‘agency generation’, whose values are cheerfulness and perseverance.

However, Thomas Melle isn’t rehashing Brett Easton-Ellis – his language alone tells you this. It doesn’t convey boredom: it’s intensely charged, packed with tension, visual to the point – and sometimes past the point – of being painful. Pain. And the world. And how the two relate to each other. This is what the book is about – or becomes about, at the latest when the narrative perspective is handed over to Magnus Taue, the supertasker. The novel is inundated by a flood of perceptions. "Magnus was one of those people," it tells us, "who feel constantly beset by the outside world.” A feeling which the novel promptly passes on to the reader. Magnus is in his mid-thirties and, as we discover early on, was diagnosed by the end of the nineties with “so-called schizophrenia”, in addition to a therapy-resistant tinnitus. He is hired as a copywriter by the same firm that employs Thorsten Kühnemund. And little by little he becomes detached from the world. Or the world from him. Something changes. Light, perception, people. What would be a metaphor in literature, Magnus experiences as a reality: a stab in the heart; the burning under his fingernails. "Sickster" sticks close to Magnus's side – as he treads a path that leads him into madness. It isn’t difficult to guess where this takes him: the closed ward of Berlin’s Charité hospital. There Magnus meets Laura, Thorsten Kühnemund’s girlfriend. It will not be their final destination.

Is “Sickster” a novel about how a society geared towards efficiency makes the individual sick? Or about how a sick individual moves through this society, how he is destined to founder and run aground on it? It’s a question of perspective. "Sickster" answers it in its own unique way - it is not a book about sickness; it's more a symptom of it. This is confusing and enthralling at the same time. The text itself contains no anchor around which any form of health in the medical sense could take shape. Nor is there a counter-position against which it could be defined: there is only an amorphous mass of humanity, perceived in schizoid attacks of paranoia as “THEM”. This is what makes the novel so dangerous. And is there the potential for social diagnostics, concealed behind this vulnerable form? If so, then it lies in the empty spaces around which Melle's despairing heroes breathlessly circle. What they are missing, and what the novel tacitly yearns for, can be described with an old-fashioned word: comfort.