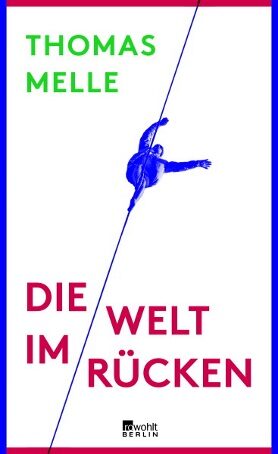 Thomas Melle Die Welt im Rücken
[The World at Your Back]

"A neuron storm in my head"

The most talked-about book in the fall of 2016 was probably Thomas Melle’s "Die Welt im Rücken" [The World at Your Back], an autobiographical work in which Melle tells the story of his illness. It used to be called "manic depression," what Melle is struggling with. Nowadays they call it "bipolar disorder." One question right off the bat: "Is this even literature?" In these days when autofictional projects such as Karl Ove Knausgaard’s My Struggle can rapidly advance to the status of cult books, the question almost seems obsolete. Yes, "Die Welt im Rücken" is literature – great literature.

How else should we describe a book whose powerful language captivates us while bringing us to the point of despair? That leads us into situations of deepest human misery? That confronts us with our own foibles and voyeurism, while greatly expanding our knowledge? If that’s not literature, what is? Melle chose not to call his book a "novel." But that’s not important, because in his new book he essentially just radicalizes the approach that began in the two previous, prize-winning works, "Sickster" and "Three Thousand Euros." He tells all about his medical condition, masterfully linking his story to society’s perception of it.

A "failed bildungsroman" is what Melle himself calls the book. The narrative self slowly loses his grip on the world. And the self itself, too. Something shifts. In his own perception and the way his surroundings encounter the narrator. It’s about him, only about him now. He has sex with Madonna and spills a glass of red wine on Pablo Picasso’s pants at Berghain. He sells his personal library, is financially ruined, beats people up and is beat up himself. When he’s having a spell every little thing takes on meaning; the world is one big conspiracy theory that is aimed against him and out to get him. The narrator rants and raves, steals and provokes. In his manic phases he’s no longer able to see himself from a distance. Only when they’re over can he analyze what’s happened to him, before it starts all over again. One recalls Thomas Melle’s – to put it mildly – eccentric performance at the Bachmann Prize in 2006. In "Die Welt im Rücken" we read about the ordeal, the neural explosion he went through during these moments in front of the camera.

"Die Welt im Rücken" is sometimes rough going but always a fascinating read. This is how it feels when a person with a storm raging inside their head has to face himself when he’s no longer himself. And when he’s capable of reflecting on it: "I sit here and I’m an object. I no longer belong to the human race, but to the world of inanimate objects, things: soulless and dead. But the people around me, even though I know better, are also just inanimate objects. Their words, if there are any, barely reach me." And a few lines later Melle writes: "I’m twenty-four, but time is lost, and me within it." He’s ashamed of himself and is engulfed by his shame. He’s sent to the psychiatric ward, takes pills that make him fat and that calm and numb him. Until it starts all over again.

The language Melle uses to describe his downfall is impressive. It strikes out in all directions, is turbo-charged yet still completely under control in this hands of this masterful author. "Die Welt im Rücken" is high art, and for all the pain and rage it conveys never descends into the pathetic. And there might even be a light at the end of the tunnel: the library that Melle has sold off for a song at the start of his report is now beginning to grow anew. If he ever becomes manic again, he writes, may someone hand him this, his own book.

"If you’re bipolar, your life has no continuity anymore. The illness has wrecked your past, and it looms over your future even more threateningly. The life you knew is made more impossible with every manic episode. The person you think you are and know has no firm ground under their feet any more. You literally can’t be sure of your self. In this short-circuited, manic state, what otherwise would have only briefly flashed through your head before instantly being discarded instead becomes action. Everyone probably has a chasm in their soul, which they reveal occasionally. Mania is when you go on a tour through that chasm. Things you’ve known about yourself for years become invalid. You don’t just start again from scratch, like when you’re bank account’s empty. No, you go down below zero, you’re in the red. You’re no longer connected to anything in a reliable way."