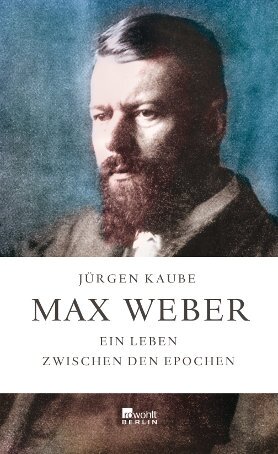 By the end of his life, as Jürgen Kaube writes in his new biography marking the 150th birthday of Max Weber, not much was left of the world into which the famous sociologist had been born in 1864. Kaube's book bears the subtitle, "A Life Between Epochs," and indeed Weber's biography starts just prior to the creation of the Wilhelmine Empire and ends just after its demise. Weber, Kaube writes, "lived in the age of the nation-state and its crisis, the age of historical intellectualism and artistic avant-gardes, the age of Wilhelmine Germany’s rise to global power and the age of political extremes." Weber's was a world in transition, global and internationally connected. Moreover, Weber's was an age of mercantilism and capitalism, of rival conceptions government and models of society. Anyone who wanted to describe and analyze all these massive developments needed both broad horizons and a keen eye, a talent for integrating obscure facts and contradictory phenomena, a gift for injecting conceptual order into chaotic reality.

In his short, unbelievably productive life, Max Weber became not just an accomplished scholar, but an intellectual benchmark whose theses and arguments repeatedly got to the heart of his times. In his extraordinarily knowledgeable and compelling biography, Jürgen Kaube - a sociologist and the deputy editor-in-chief of the arts section of the prestigious Frankfurter Allgemeine Zeitung newspaper - vividly introduces readers to the twists and turns of Weber's life and how they were connected to Weber's ideas.

Readers learn about Weber's youth in a wealthy bourgeois family at a time when bourgeois were still fighting to secure their political and social status. An early developer, Weber quickly internalized the Wilhelmine ethos of education. At the age of fourteen, he still hadn't learned to swim, but he had already read the equivalent of a small library. Kaube's description of this social background makes Weber's "conduct of life" (one of the sociologist's famous ideas) come to life - from his early childhood to his days cramming for school to the obligatory masculine tests of drinking and fencing in Germany's university fraternity scene.

Weber, who was named professor of economics in Freiburg in 1894 and in Heidelberg in 1896, "crammed his life and himself with appointments, books, tasks, work, food and beer." The scholar's hectic life didn't change after he married his wife Marianne, his second-cousin's daughter. He fought against growing depression by working even harder, which caused his health to worsen and ultimately led to a nervous breakdown.

In 1904, after almost completely withdrawing from academic life for five years, Weber published "The Protestant Ethic and the Spirit of Capitalism," the first part of the work that would establish the sociologist's later fame. Kaube is fascinated by this constellation precisely because there is no way of establishing a clear causal connection between Weber's lifestyle, his nervous breakdown and his masterpiece: "What makes the 'blank space' between 1899 and 1903 in Weber's biography so remarkable is the fact that the emotionally disturbed traveler, who was incapable of public communication or extended labor, must have conceived of the work that would make him world famous, his study of the historical connection between the Protestant work ethic and the modern capitalism."

With great penetration, Kaube investigates the genesis of this sociological classic, which has survived all attempts at refutation and is still cited - even by people who have never read it. Kaube also intimately describes Weber's further life and work: the torn nature of a person more interested in picking fights than advancing his career; the initial enthusiasm for World War I, which quickly turned into disillusionment and led Weber to reject politics; late erotic fulfillment with Mina Tobler and Else Jaffé; Weber’s return to the university and his increasingly large-scale public appearances; his feuds with colleagues and rivals; his encounters with statesmen, business leaders, military commanders and poets like Stefan George, who inspired Weber to formulate his idea of charismatic leadership.

It's a measure of Kaube's artistry that he has succeeded in capturing the life and work of the most thoroughly researched German intellectual after Luther and Goethe in only 400 pages. The hunger for facts and the desire to be rational and objective that Kaube identifies as the main characteristics of Weber's school of sociology are also positive attributes of his own critical but admiring biography. At the center of Kaube's book is the question of why Weber's life continues to interest us today. As Kaube depicts him, Weber was searching for answers to questions that continue to occupy present-day society. The fact that Weber's ideas remain so alive stems in no small measure from the questions that his works posed.