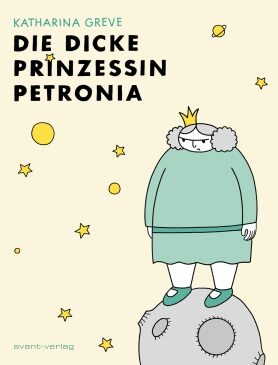 Translation Grant Programme
For this title we provide support for translation into the Greek language (2019 - 2021).

You are doubtless familiar with the Little Prince. You know all about the asteroid, B612, on which he lives, and which is ‘scarcely any bigger than a house’. You know about the three volcanoes on this minuscule ball of matter, the monkey bread trees and, of course, the talking rose. There’s no doubt about it: countless people across the globe have taken Saint-Exupéry’s story to their hearts. They love it, and perhaps have even made its central sentence the guiding principle of their life: ‘On ne voit bien qu'avec le coeur’ - ‘We see well only with our hearts’. Some of us might feel a certain queasiness in the face of so much goodness and wisdom in someone so young. So is there really no dark side to this little prince and his asteroid? Or might there even be some other solitary young galactic aristocratic out there with a much more hard-boiled view of the universe than the Little Prince?
To find the answer to this question you need to get to know Princess Petronia. Not only does she think thoughts that go against the grain, indeed run directly counter to mainstream assumptions: her unbuttoned mouth occasionally leads her to brazenly flout all the usual conventions of polite discourse, as for instance when she tells her readers to ‘Take note: we can see better with a magnifying glass than we can with our hearts’ - and it’s not difficult to guess who this remark is aimed at!
So you need to get to know ‘Fat Princess Petronia’ - and you can do so via the one-page stories by the Berlin illustrator and author Katharina Greve that have now been brought together to form a 100-page comic book. In the course of your intimate interchanges with this young lady, you would be well advised to convey a degree of scepticism regarding the Little Prince. If you do so, you can count on her developing a considerable liking for you, which in turn will lead her to indulge her need to express her opinions. But beware - Petronia is very temperamental! Scarcely surprising when one takes account of her family situation, in which a highly domineering mother - Queen of the entire universe - and a detested cousin take centre stage. And that cousin is none other than the Little Prince.
So where are we, then? In the depths of the universe, somewhere between Schloss Neusternstein, the Large Magellanic Cloud, and the Milky Way. There, at the remotest edge of the Milky Way, a midget planet, W 857, is  in orbit - more around itself than around a sun. On it, Princess Petronia sits, stands or lies (there’s little room for anything else), dreaming of becoming the Queen of the Universe once she’s grown up. For the time being, however, her very determined mother remains on the throne, and has ‘outsourced’ her, as Petronia puts it, to W 857, since their palace, Schloss Neusternstein, is (allegedly) short of space, and there’s an infinitude of space out in space that (allegedly) offers darling little Petronia endless opportunities. But Petronia, who is somewhat on the large side, is not at all happy on her mini-planet, and perched on this volcano-strewn blob of matter devoid of roses and indeed of any other vegetation she begins her sardonic lamentations thus: ‘Oh, great! This has to be the dullest, lousiest lump of rock in the universe. Even my cousin, stupid little creep, has a bigger one than me.’
Adjacent to each of these one-page episodes we find Petronia on her planet broadcasting into space - thus essentially to us as readers - a succession of spicy commentaries, fleeting brainwaves and sarcastically expressed insights. Within the story itself Petronia routinely confronts us with whatever state of mind is provoked in her by the numerous challenges presented by her daily life - her ‘crazy’ life, as she would term it - both on and around her planet.
We soon realise that Petronia’s predicament bears much more closely on the actual life of young people than we might have supposed. Understandably enough, the young lady is at sixes and sevens with herself, whilst also railing against the             circumstances that have been imposed on her. And what do people in such a situation do before they fall prey to depression? They take refuge in sarcasm, or - at best - in clear-sighted irony.
All Katharina Greve has to do in order to make us feel empathy towards Petronia, indeed a positive sense of solidarity, is to draw a few lines conjuring up a cartoon young female with a tiny crown perched between the buns on either side of her princessy little head, a bright green tent dress, and a belt that unflatteringly emphasises her girth. In addition there are minimalist but precise and unmistakably symbolic backgrounds. A further feature - and a particularly crucial one! - is the carefully executed line denoting Petronia’s eyebrows, as a result of which her every glance tells us: ‘Don’t go confusing me with that little creep of a cousin of mine - it’s me that’s having a tough life!’ And what can we say? - We readily believe her.

The entire world idolises the Little Prince, who sees everything ‘with his heart’, but no one pays any attention to his cousin, fat Princess Petronia. In contrast to the sweet, blond little boy, she is bad-tempered and totally unsentimental. She fits none of the Little Princess clichés - she detests pink frills, and enjoys maths. Needless to say, the Little Prince has a bigger planet, whereas Petronia is stuck with probably the tiniest and most boring planet in the universe. Aided by Mirco the multifunctional worm, she tries hard to pep up her dismal existence - journeying through the cosmos via a wormhole, attempting to meet David Bowie - but mostly without the least success.
Petronia’s absurd-cum-comical adventures incorporate motifs from ‘Le petit Prince’, fairy tales, science fiction, and classics such as ‘Faust’. Graphically, too, they are full of allusions, with the images sometimes mimicking adverts, board games, or children’s cut-out kits.