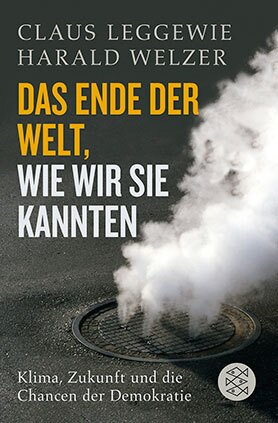 Claus LeggewieHarald Welzer Das Ende der Welt, wie wir sie kannten
[The end of the world as we once knew it] – Klima, Zukunft und die Chancen der Demokratie [The climate, the future, and the prospects for democracy]

Claus Leggewie
Harald Welzer
Das Ende der Welt, wie wir sie kannten
[The end of the world as we once knew it]

Social psychologist Harald Welzer and political scientist Claus Leggewie have borrowed the title of their book from popular culture: “It's The End of the World as We Know It” is a song by the group R.E.M. Instead of what its title seems to suggest, this work of non-fiction does not describe a doomsday scenario. Rather, it indicates several courses of action that can show us a way out of the current crisis.

Whether climate crisis, financial crisis, or environmental problems, the authors analyze why conventional strategies of crisis management have failed and explain why the solution has to involve the re-politicization of civil society. Twenty years after the collapse of the last of the great ideologies (Communism), people will have to be actively committed in order to create the type of society they would like to live in. The End of the World as We Knew It delivers an impressive analysis of the current threat to the human life-world while suggesting original strategies for addressing it.

The crisis with which Welzer and Leggewie see people around the world confronted is multifaceted but can be summarized in the key phrase “finite natural resources.” Climate change and the social disaster accompanying it threaten the survival of entire peoples. The ever-growing demand for energy is faced with a shortage of raw materials. Oil reserves are running low, and among the problems that will become more acute in the coming years are the scarcity of water and the unresolved challenge of having to feed a constantly growing world population.

Given these diverse challenges, the authors of the book establish that there is a "meta-crisis which calls into question whether the earth system can continue to survive." There is the financial crisis which, by undermining the global financial system, also threatens the human life-world. Like the harm done to the climate and the environment, it is also the logical outcome of a capitalist system unconditionally fixed on linear growth. A simple course correction is therefore no longer sufficient for averting catastrophe because, as Welzer and Leggewie argue, a system that has maneuvered itself to the brink of collapse can no longer develop strategies from within. It is thus time for a change in perception and direction.

Why do politicians not act in the face of indisputable scientific evidence that a global reduction of carbon-dioxide emissions is something non-negotiable? The reactions to the climate summit of 2009 in Copenhagen, widely considered to be a failure, suggest just how amazed the public is when political leaders seem incapable of taking action. The authors present convincingly how people, despite knowing better, often let their actions be guided by particular rationalities. A prime example of this are the millions of Euros spent in Germany to subsidize an increasingly endangered auto industry.

Although the automobile is one of the major sources of CO2, what is universally rational -- the urgent need to avoid harmful carbon emissions -- is somehow ignored in the face of concrete economic pressures. A similar process comes into play when environmentally conscious citizens who may never drive a car flag down a taxi when they are in a hurry. Such real-life examples illustrate abstract phenomena, making tangible the social mechanisms which underpin the system Welzer and Leggewie are questioning.

The authors also deliver a nuanced critique of the existing strategies for overcoming the crisis. In the hope that emissions trading (the genesis and implications of which are explained) will be effective, politicians rely on market-based methods to control the problem of carbon emissions. But with hardly any success to speak of. Among the solutions proposed, theCarbon Capture and Storage program is particularly noteworthy. It requires that carbon dioxide be captured before it enters the atmosphere and then stored in underground reservoirs. Yet the fact this is linked to substantial risks is for the most part obscured by proponents of the technology.

For Welzer and Leggewie, only when climate policy is freed from dependence on certain business economies will it be possible for a "green market" to emerge, which will then include factors such as sustainability and environmental protection in its calculations. The precondition, however, for such a new market is to move away from an unquestioned ideology of growth, to which the authors ascribe a "magical and parareligious quality.”

The authors, nonetheless, doubt that democracy in its present form is capable of taking the necessary steps towards more comprehensive change. Democratic systems are under greater pressure than autocratic forms of government, which are quickly able to implement measures deemed "unpopular.” In addition, public confidence in the ability of politicians to resolve the challenges in question is on the decline. Particularly in the parliamentary democracies of the European Union, the authors note a strong cultivation of elites that produces a separation into a political sphere of professional politicians and a "pre-political" one of citizens.

Although a large number of citizens in the European Union see an urgent need for action against climate change, their political leaders are undertaking little or nothing. The pressure to achieve short-term success in the next round of elections means that political parties are really only responding to immediate concerns. The authors therefore call for a politicization of the "pre-political sphere.” The political commitment and active participation of citizens form the basis for a "cultural revolution” in the sense meant by Welzer and Leggewie. Specifically, citizen engagement in “communities of resilience” -- manageable groups based on mutual aid -- will be able to respond rapidly whenever changes occur.

The authors see examples of such engagement in numerous grassroots initiatives and non-governmental organizations working successfully on alternative models such as sustainable energy or exerting renewed pressure on policymakers. This stands in contrast to the widespread perception that individuals cannot achieve anything on their own. Once citizens understand that “the private is political,” they have options for revising their habits with respect to consumption and diet. Such a strategy, once it is perceived as “chic,” will have a symbolic effect and serve as a model for the behavior of others. APO 2.0 [“Extra-parliamentary Opposition 2.0”] is what the authors call this popular movement, thereby alluding to the prospects for global networking provided by the Internet.

"We are the revolution,” said artist Joseph Beuys, and by quoting him, Harald Welzer and Claus Leggewie are including themselves in that assessment. Their book tells a new story of how the world can be reshaped once we break with conventional ways of thinking. Without making it a secret that they consider themselves part of this movement, the authors call on readers to take action as well.

Despite possible doubts about the feasibility of this new extra-parliamentary opposition, the book has the effect of a rallying cry. While the authors are clearly directed to readers’ needs, providing a structure, real-life examples, and a fluid style of writing, they also do not neglect to cite sources or include an up-to-date bibliography.

The remarkable thing about The End of the World as We Knew It is not, as in Harald Welzer’s earlier bookClimate Wars, that the individual facts are new. Rather, what is original is the coherent overall picture we get when they are linked together well. Welzer and Leggewie provide an innovative perspective that encourages individuals to do their part in changing society. It is thus appropriate that the book closes by quoting the final line of the R.E.M. song: "It's the end of the world as we know it -- and I feel fine.”