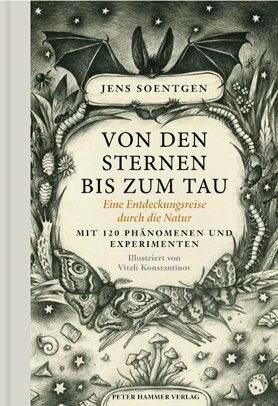 Olga Teremkova hat From the stars to the dew. A voyage of discovery through the natural world. With 120 observations and experiments ins Russiane übersetzt
More

​Do we still remember the time when we believed we were global explorers, scientists and philosophers (although we didn’t yet know the word) in one?  Do we remember the time when we were ten or eleven or twelve years old, devouring adventure novels and finding scenes from Karl May’s books even in the little brook around the corner, in abandoned quarries or even in a trickle of water emerging from a heap of melting snow on the side of the road?  In those days we thought it was possible to comprehend the world in front of the horizon, not just to move through it.  And of course with this knowledge we were equipped to investigate the world beyond the horizon too.

This was closely followed by disillusionment.  We were overrun with information about the world out there – in school and through the media.  Many things were interrelated and even contradictory.  The connections which we thought we had understood in our little world were no longer relevant to the big world.  And keenly experimental, cross-curricular, practical teaching was as rare in conventional schools as the kind of philosophical overview which would teach us not just to know things but really to understand them.  Unless we had a teacher who, in spite of everything, encouraged us to carry on being curious about the way the world works.

This unusually long introduction is necessary to convey the pleasure in a book which fits exactly with this phase of curiosity and amazement about the world: Jens Soentgen’s voyage of discovery through the natural world: From the Stars to the Dew.  In this unusual non-fiction book, the author, who is fortunate enough to be a scientist and philosopher at the same time, considers one hundred and twenty natural phenomena and presents these to global explorers young and old in eighteen chapters and numerous experiments.

Its outward appearance reveals this four hundred page book as a small masterpiece of printing, with numerous wonderful black and white illustrations by Vitali Konstantinov.  With their gentle sepia colouring, the drawings seem to belong to an old natural history handbook.  And sometimes, when they depict Homo Sapiens, they take a gently ironic view of the self-appointed lords of creation.

The book’s aesthetic qualities are incidental, however.  More important are the clarity and understanding with which the author presents his research and teachings to potential explorers – a truly naturalistic education.  In the beginning there is the great amazement at the countless wonders just in the natural world around us.  Just like in the days when we still believed that we were in the centre of the world.  Jens Soentgen derives the principal motivation for research and discovery from this amazement.  You could say, along with Hesse, that, ‘Every new beginning holds its own magic.’  Admittedly, to see the world in this way, one needs a stable reference point from which to explore.  As young explorers we stand, as we have said, in the middle of our immediate world: the valley, the river, the hills, the forest, the quarry around the corner.

The author chooses Rose Island in Lake Starnberg as the familiar, much-loved place from which to explore the world.  From there he devotes himself wonderingly to natural phenomena, seen and unseen: ‘from top to bottom, from the huge things right down to the tiny ones.’  From the stars over the lake, to the sky, the sun, the moon, then to the lake, the island, the trees and people and birds and bats – down to the plants.  And finally he delves down into the earth, into the microcosm of dust, diatoms, bacteria and carbon atoms.

Before Jens Soentgen suggests easily manageable experiments to his readers, requiring neither microscope nor telescope, he always offers stories and anecdotes which prove that there is much more to the natural sciences than the frequently observed ‘cold custom’.  The natural sciences are sensual in the narrow as well as the broader meaning of the word:  ‘the more we rediscover how to look, to listen and to feel, to taste and to smell, the deeper our insights will be.’

Therefore a somewhat daring claim on which to end: this book is a book for life, which leaves many school-books in the shade.  Together with a familiar, convenient place of investigation and with an active, guiding adviser in the background, readers can morph into real-life global explorers, big and small.  As long as they are prepared to lose some time, and not to gain it.