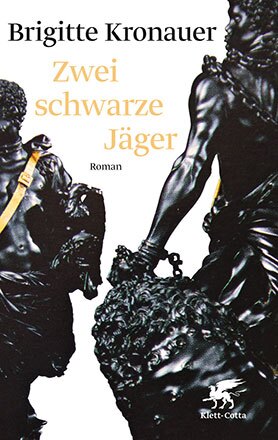 Among the notoriously unsuccessful experiments of contemporary writers are various efforts to reinvent how historical figures experienced their lives and perceived their own worlds. The results tend to be either sentimental or strained and dutiful exercises. Not so with Brigitte Kronauer who in a chapter of her latest novel Two Black Hunters gives center stage to one of the most remarkable women of the late 17th and early 18th centuries--the Duchess of Königsmarck, mistress of August the Strong and later provost of the diocese of Quedlinburg.

The episode "In the Fervor of your Suffering"—the title quotes the popular chorale „Who Solely Lets Our Dear Lord Reign“--is a captivating baroque miniature that encloses as in a casket this epoch’s intoxicating colors and glowing affects, its rigid rituals and melancholic memento mori.

Kronauer, recipient of the coveted Büchner Prize and arguably the most sophisticated and linguistically musical writer on the contemporary German literary scene, proves just as masterful in nimbly masquerading the past as in set-ups where she envelopes a brittle present with romantic irony or charges it with mythological references.

The reader who intends to follow this author had better be prepared to traverse dizzying heights, arduous lowlands, and magical labyrinths. What starts out as a satire on the literary scene soon explodes into a cleverly disorienting construct that teems with allusions and analogies, ambiguities, and subtextual correspondences.

In the tiny green parlour of a small provincial residence where the author Rita Palka reads from her narrative Two Black Hunters, the crossing points of the stuccoed latticework on the walls are marked with chips of reflecting glass. And just as Rita pieces together from the shards the reflection of the „flashing green evening light in the beautiful wilderness outside“ we recognize in the novelistic episodes and their rather discursive, occasionally tangential trajectories the scintillating reflection of Kronauer’s architectural plan overgrown with the rambling vines of narrative arabesques and ornaments.

Inspired by a famous sculpture in the Villa Borghese in Rome--two black hunters and two large cats that are mutually and forever shackled together--Rita Palka narrates the story of a very bizarre relationship.

When she sees the small-town gathering– her sparse and captive audience—react with signs of bored torpor, she transforms the ensuing story, announced as „The Grotto,“ into a showpiece of daredevil improvisation, bizarrely interweaving the cave of Polyphemus, the giant Cyclops from the Odyssey, with the grotto of Emperor Tiberius in Sperlonga, an eccentric professor of archaeology, and the tragic life story of a would-be musician from her own hometown.

This inevitably leads to a comic scandal when in a fit of jealousy the organizer’s wife smashes a replica of the sculpture of the Two Black Hunters prominently displayed in the residence, leaving its remains on the floor in a thousand pieces. Brigitte Kronauer continues what Rita Palka has started. She taunts her readers with strangely crossing life trajectories, scurrilously foundering characters, grotesque occurrences and radical narrative shifts, constantly challenging them to gather remembered and freely invented fragments and rearrange them into new constellations.

The episodes are populated by what at first glance seems to be an utterly disparate bunch. However, what ties them together are dreams and visions of happiness that can’t survive the light of day—among them are the cast-off mistress of the King of Saxony and the former beauty, now wheel-chair bound and aged beyond recognition, who challenges her ex-lover and inveterate Don Juan to seduce the odious young mothers on her block. Then there is the supermarket cashier who dreams of spicing up the daily grind by turning tricks, and the midget, the descendant of a wealthy, respectable family who, unable to let go her teenage crush on her globetrotting uncle, acts on her murderous fantasies. And finally there is the once-famous painter whose creativity has regressed to producing goat rhymes, and the editor of a publishing house, an opera buff in love with a waiter, who has embarked on a glacier tour with philosophical underpinnings to trace his deceased aunt’s footsteps on her very personal quest for happiness.

The „desire for music and mountains“–a phrase from Nietzsche and the title of Kronauer’s previous novel—is being satisfied here as well: The author’s musical language carries us across impassable terrain up to the heights where our eyes can see beyond the „horrible emptiness“ and „deadly precipices“ of human life to the distant realm of refractions and unimaginable splendor. Whenever this small miracle happens, literature—I can’t help putting it in these terms—literature has answered its most sublime calling.