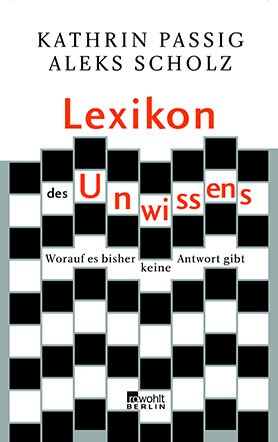 “What we know is a drop, what we don’t know is an ocean.” (Isaac Newton)

To write a lexicon of unknowns is a rather daring venture. After all, it is impossible to know what we don’t know. For that reason Kathrin Passig and Aleks Scholz have prefaced their lexicon with a few explanatory remarks. Yet even before they begin, the former U.S. Secretary of Defense, Donald Rumsfeld, is given the opportunity to say a few words:


As confusing as that may sound at first, it is really quite logical. A lexicon of unknowns is naturally just as bound to its date of publication as is a lexicon of “knowns”. One hundred years ago, many of the subjects discussed here could not even have been broached – “elementary particles”, for example, or “dark matter”. Other questions have been challenging us for quite a long time, such as the Riemann hypothesis which deals with the distribution of prime numbers.

Likewise, we can hardly predict what questions will be preoccupying the human race three generations from now. And by that time, as the two authors speculate in their introduction, the answers to today’s questions may very well be common knowledge: “Dark matter… of course that’s the left-rotational super-axoquattrions. Everybody knows that. And how could anyone ever have believed that sleep had any sort of function. Naturally, cats don’t purr. That’s just an acoustic illusion. And it says right there in the Voynich Manuscript what rat kings are.” (p. 11)

The authors have compiled an ostensibly systematic – that is, alphabetized – “lexicon” comprising 42 entries, some of which in fact do rank among today’s most important unsolved scientific problems, generally in the areas of physics, astronomy and mathematics. Yet the reader will also come across other questions of concern which are rarely held to be canonized subjects of research. These include issues of human behavior and perception (see the entries on tipping, unpleasant sounds, and sexual interests) as well as a few anomalies drawn from the world of biology, such as the strange habit of “anting” performed by some birds or the puzzling reproductive behavior of eels.

Although the topics are highly diverse and not arranged for the reader according to content, each individual article is enlightening in its own right. Some topics are striking precisely because they do not seem to have anything unknown about them. “Human height” is one such example. Don’t we already know that people’s height is determined by their genes as well as by various factors of their standard of living, such as diet and health care?

Nonetheless, some research has demonstrated that there are, in fact, growth factors which either counter these assumptions or which are apparently affected by other vital factors that have thus far remained unidentified. Thus, although Europeans, on average, have grown continually taller for centuries, Americans have not. Today, in comparison with the tallest Europeans – the Dutch and the Norwegians – Americans are almost seven centimeters shorter, even though as late as the 19th century the relationship was nearly the opposite. Why did Americans stop growing in the middle of the 20th century – and not just those from the lower classes, but the wealthy as well?

Another topic which at first sight does not appear to be overly perplexing pertains to the nature of money. Yet it gets really complicated as soon as one wishes to determine the amount of money currently in circulation. What is the exact definition of the term “money supply”? Does it only refer to the cash that is in circulation worldwide? Or also to bank loans, which exceed by far the amount of cash? And what about stocks, and even options?

Then there are the questions which, although we would rather not even know, have yet to be fully resolved down to the last detail. Anesthesia is one. It is still unknown which biochemical processes within the body actually cause a patient to go under for an operation. Anesthesiologists do know, and with utmost precision, how to do it, but they apparently don’t know why it works. Perhaps it is similar to the hallucinogens LSD or mescaline, which also affect our perception and enable us to see and feel things differently than we do in our so-called “natural state”. Yet how they work exactly and why these substances, also called psychedelics, have been proven not to cause dependency remains unknown.

The lexicon thus leads its readers along from one engaging topic to the next, impelling them to both read on and ruminate. The authors present their highly complex topics in an extremely informative yet light-footed manner. Readers may still not comprehend complex mathematical functions any better when they are described as sausage grinders, but they will have at least a slight inkling of what is meant when the Riemann hypothesis or the P=NP problem pops up in conversation at the next party. And who knows? Maybe elementary school children three generations down the road will know everything there is to know about the Indus script…