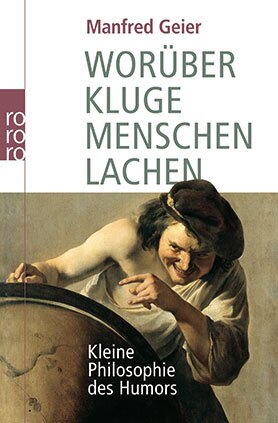 Who can forget the scene? With the flames of the burning monastery library licking about him, the blind Jorge of Burgos sits in the innermost secret chamber, destroying page after page of a forbidden manuscript so that it can never be transmitted to posterity. The pages he burns are torn from the book which semiotics professor Umberto Eco has overwritten - like a palimpsest of the history of western philosophy and literature - with his mystery novel, "The Name of the Rose". The doomed manuscript is the famous, long-lost Book Two of Aristotle's "Poetics (peri poietikes)", in which Aristotle set out the rules for the writing of comedy. In Eco's novel, the venerable Jorge - who bears a distinct resemblance to the bibliophile Jorge Luis Borges - had called laughter a grotesque expression, deforming the human face into an apelike grimace. Murders are said to be committed within the monastery walls because laughter is the devil's work.

The Hamburg philosopher and linguist Manfred Geier, noted most recently for his fulminating biography of Immanuel Kant ("Kant's World"), takes a philosophical view of this mimic reaction in his newest book, "What Makes Intelligent People Laugh", offering us "a concise history of philosophical humor" as scholarly as it is entertaining. Why is it that people laugh, and what meaning do wit and humor have for our daily lives? Starting from these questions, Geier examines the history of western philosophy and ideas and shows, at various points along the way, what the great philosophers themselves laughed about and what they can tell us about the sources and causes of their laughter.

It was Sancho Panza, that seemingly untutored squire of Don Quixote's, who so clearly recognized that it is above all laughter which separates the human from the animal. Thus he admonishes his master, revealed time and again as a child of sorrow: "Gracious lord, it's true that sorrow was not meant for the animals, but for humankind; still, when humans are inclined to sorrowfulness beyond all measure, they do become animals." It is almost as if Sancho Panza was familiar with the ancient philosopher's book on laughter and comedy, for his popular wisdom harks back to Aristotle's insights. Nevertheless, as Geier shows in his reflections beginning with Greek antiquity, the Greeks disapproved of loud laughter in any but young persons as a sign of poor education and contemptible vulgarity.

In a cursory tour of the pertinent "Dialogues", Geier shows that it was Plato, probably the foremost pioneer of western philosophy, who banished laughter from that tradition. In the long shadow of Platonic influence, claims Geier, thinkers like Democritus of Abdera stood little chance. Few of Democritus's writings have survived, and his ideas have come down to us only in bland, anecdotal form. But this "Laughing Philosopher," a natural scientist whose fellow citizens considered him insane, is precisely the one who intrigues Geier. In an exacting search, Geier traces the line of confrontation between philosophical positions: on the one side stands a culture founded on proportion, discretion, serenity, and grace, while on the other a witty independence of mind emerges to ridicule human folly.

Relishing each detail, Geier illustrates the importance philosophers have ascribed to humor over the course of history, and attempts to show what poets and thinkers like Rabelais, Kant, or Schopenhauer laughed about in their own times. Happily, the German tradition - not particularly renowned for its humor - is treated here in empathetic, often gently amusing portraits of Christoph Martin Wieland, Kant, Schopenhauer, or Freud, and extending all the way to the linguistic antics of a Karl Valentin.

Voltaire once cautioned that whoever has to search for reasons to laugh will never be happy. A joke explained is no longer funny, its point is lost the moment one tries to grasp it with theoretical precision. Thus, Geier is less convincing when he attempts to distinguish the three bases of humor: the theories of superiority, incongruence, and relief. After all, how much better do we understand Karl Valentin's wit when we are told that he "dissolves the indefinite substance of adverbs"? No, the merit of this intelligently entertaining book lies in the rich array it offers of anecdotes and aperçus from the history of philosophy, where the Thracian servant girl's proverbial laughter at the philosopher Thales's fall into the well exposes the fundamental lie of European philosophy: "The love of wisdom comes at the price of our detachment from the real world."

Outside of moral seriousness and epistemological rigor, on the byways of western philosophy that Geier's readers travel with him, he reveals many a new chapter on what constitutes reality. Detours, it is well known, increase our knowledge of the terrain.