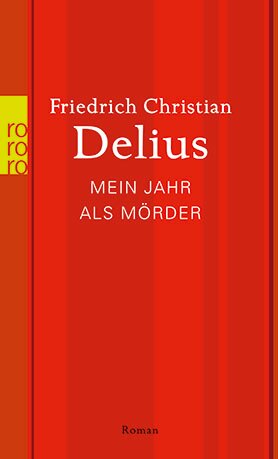 “It was on the evening of St. Nicholas’ Day, at dusk, that I received the instruction to become a murderer.” This terse remark, with its powerful implications, gets Friedrich Christian Delius’ latest novel off to a rousing start. It hints at the explosive power of the story to come, which fuses recent history and autobiographical elements in a fascinating combination of documentary and fiction.

We are reading the “confession” of a nameless narrator with clear biographical parallels to the author. From the perspective of thirty years later, he describes how he plotted to assassinate former Nazi judge Hans-Joachim Rehse in the years 1968/69. At the time, he was studying literature in Berlin, young and politically active, but otherwise reserved and well-behaved – hardly someone who would seem cut out for the role of violent avenger.

The narrator’s outrage is so great that he wants to “set an example” against injustice past and present. It is not merely the political and moral scandal of the fact that the former associate judge at the Nazi People’s Court, a man responsible for more than two hundred death sentences, has been acquitted by the West German justice system of the late sixties. More than that, it is because of personal ties that this “quiet, peaceable” person resolves to make Rehse, now old and frail, pay for what he has done.

Georg Groscurth, the father of the narrator’s best friend Axel, was one of the many people condemned to death by Rehse and Freisler. Axel has been the narrator’s close friend since childhood and was the first person to tell him about the crimes of the Nazis. His “primal experience” was twelve-year-old Axel’s revelation that his father’s head had been “chopped off” in Brandenburg Prison in 1944. The question continues to haunt him as an adult: “Why do they chop off people’s heads?” In retrospect, the narrator recognizes this childish sense of shock and helpless outrage as the seed for his murder plans.

After hearing the radio report of Rehse’s scandalous acquittal that St. Nicholas’ Day, the angry young man sets out with meticulous zeal to compile facts about the doctor and resistance fighter Georg Groscurth. During World War Two, Groscurth and the chemist Robert Havemann founded the now-forgotten resistance group “European Union”. The E. U.’s goals were primarily humanitarian: its members hid Jews and victims of political persecution, obtained false documents and sought to cooperate with resistance organizations in other countries. As a doctor at Berlin’s Robert Koch Hospital, Groscurth declared many young men unfit to serve, saving them from being sent into battle. At the same time, his expertise let him rise to become Rudolf Hess’s personal physician. This privileged position gave Groscurth access to secret information which assisted the European Union in its struggle against the Nazis until, in 1943, the resistance fighters were betrayed and arrested. They were executed the following year.

The narrator becomes so obsessed with researching the details of Groscurth’s life and death that he neglects his studies and his girlfriend Catherine. He pursues a daring “double strategy”: working on a book about the forgotten resistance fighters while meticulously plotting the expiatory murder of the Nazi judge. Taken together, the book and the murder are meant as a condemnation of post-war West Germany’s unwillingness to remember the crimes of the Nazis: “Both had to be made public simultaneously; the murder had to happen when the book was fresh on the market. The book provides the motive for the murder, while the murder is the consequence drawn from the book. Word and deed would be one, at last, for once. The contradiction so distressing to the man of words would be dissolved.”

In the attempt to reconstruct Groscurth’s story, the narrator begins to meet with his widow, who shows him the death sentence, letters and other personal documents belonging to her husband. At the same time, he learns more and more details of the woman’s tragic existence; the story of her life and suffering makes up the novel’s second main plot. In the early fifties she was accused of sympathizing with the GDR, due solely to her commitment to pacifism and to a slanderous newspaper article. As a consequence, the West German justice system prohibits her from continuing to work as a doctor for the public health system; as a suspected communist, she is denied her widow’s pension. She is not rehabilitated until 1974, after a series of humiliating trials. Here, too, Delius extensively quotes court records and other documents, conveying Cold War hysteria and the intolerance of the post-war years just as vividly as he depicted the horrors of the Nazi regime.

The student movement of the sixties forms the third narrative strand, and its often delusional enthusiasm for agitation also comes in for a critical appraisal by the narrator, writing more than thirty years later. This is made quite clear by the narrator’s appealingly (self-) ironic tone (for all the seriousness with which he confronts the darkest chapters of recent German history); he takes a distancing stance toward his own decision to take the law into his own hands. In the end, the “super-rational assassin” this young man aspired to be does not even carry out the deed: Rehse beats him to it, so to speak, by dying a natural death from heart failure.

By skillfully interweaving these four different time planes, whose central lessons mirror and affect one another, Delius does a brilliant job as chronicler. As in his documentary novels Ein Held der inneren Sicherheit (A Hero of Internal Security) and Mogadischu Fensterplatz (Mogadishu Window Seat, 1997), he tells a moving story with a wealth of thrills and facets. Both explosive and informative, My Year as a Murderer does exactly what the student intended with his never-written book: it takes a stand against forgetting and makes a “contribution to knowledge, to democracy, to justice”.