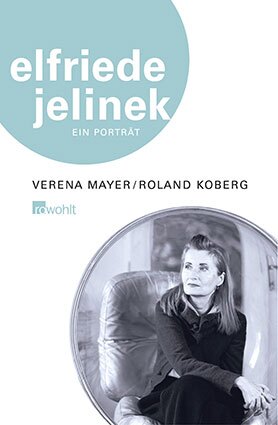 By writing "Elfriede Jelinek. A Portrait" Verena Mayer and Roland Koberg, two Austrians who live in Berlin, have closed a gap. They emphasize that their book is not a biography but rather a portrait, and that they have deliberately made subjective choices in the details they use to depict Elfriede Jelinek as a human being, an author and a public personality. In addition to holding a multitude of conversations with Elfriede Jelinek herself and many others who crossed her path, Mayer and Koberg also drew on previously unresearched archival material and unknown documents as a basis for their multi-layered portrayal of the Nobel laureate. By abstaining from all academic jargon and also not purporting in the least that they have the ability to "explain" every last detail of Jelinek's works, their account presents itself with a lightness that merely appears incongruous with their subject matter.

Mayer and Koberg have organized their Jelinek portrait according to chronological considerations, and thereby follow the classical pattern of a biography after all. They connect their accounts of the author's life and works in the time-tested manner so that each perspective sheds light on the other, although without asserting that they can be taken as mutual explanations. And indeed, many conclusions are not drawn explicitly. The biographers (or shall we call them "portraitists"?) allow readers to reach their own conclusions. Only in the case of "The Piano Teacher," which is certainly Jelinek's best known work, are the similarities between real life and fiction so stunning that it becomes difficult to disassociate them. But the parallels between the life of Erika Kohut, the protagonist in "The Piano Teacher," and Elfriede Jelinek have already been widely discussed and analyzed and calmly registered by the author. The distance that Elfriede Jelinek puts between herself and the world is also reflected in the quote printed on the back cover of the book: "All the people who think they know something about me, know nothing."

Verena Mayer and Roland Koberg, however, do know a great deal about Elfriede Jelinek and sensitively put their knowledge at the reader's disposal. Without ever succumbing to voyeurism, the authors report Jelinek's childhood in Vienna of the forties and fifties. They describe in depth not only the dominant mother who strove to transform a highly talented child into a child prodigy, but also the outwardly unassuming father whom his daughter characterizes as humorous and articulate. Torn between the excessive demands of her mother Ilona and the friendly but helpless personality of a father whose ordeal as a "half-Jew" in Nazi-ruled Austria had left him an emotional wreck, "Elfi" grew up without having the experiences of a normal teenager. While her peers were dancing and enjoying good times, she was studying viola, recorder, piano and organ until, after she had obtained her secondary school diploma her nerves finally collapsed under the strain. This was followed by a year of secluded convalescence at home because she could no longer bear the company of other human beings without experiencing a state of anxiety. During the ensuing period writing became a release valve, and in the end afforded her an opportunity to free herself from her fears at least partially, and lead an autonomous life of her own.

Her "new" life began with a bang. In 1969 the pieces she submitted anonymously to "Innsbrucker Jugendkulturwoche" (Innsbruck Youth Culture Week) won the prizes both for poetry and prose independently of each other. Simultaneously, her participation in this conference marked the beginning of literary contacts with other young authors. In 1970 she published her first novel "wir sind lockvögel, baby!" (we're decoys, baby!) with Rowohlt Verlag.

Mayer and Koberg trace Elfriede Jelinek's geographical and literary journey, they outline her artistic and personal friendships in Vienna, then in Berlin and, finally, her return to Vienna where she lives today. In 1974 she married Gottfried Hüngsberg from Munich (in a letter to a girlfriend she reported the event rather laconically: "I got married, and things are going well in other respects, too. [. . . ] not an artist, thank God!") and has been shuttling between the two cities ever since. In the same year she joined the Communist Party of Austria, a step she would later characterize as a huge mistake, and remained a prominent member for 17 years.

The creation of Jelinek's numerous literary publications ran parallel to her social commitments. Mayer and Koberg recount the life circumstances under which her novels, dramas and journalistic texts were produced and how they were received by critics and the public. Primarily in her own Austrian homeland, Elfriede Jelinek has always had a polarizing effect, not least because of her frequent and generally critical commentaries on the country's political and social issues. Much of her work first received recognition in Germany and only later in Austria. Some of her plays, such as "Burgtheater" which revolves around Austria's immensely popular Wessely-Hörbiger acting dynasty and its stance during the Nazi era cannot not be performed in Jelinek's homeland to this day.

What complicates the responses of readers (and not just in Austria) to Jelinek's works, however, are not merely the topics but her use (and alienation) of language. Jelinek herself often uses the simile of "language tugging her along, as if she were the owner of a dog sniffing at the end of its leash." In reality, of course, it is she who controls the language completely and utterly.

In their portrayal, Mayer and Koberg - fortunately! - are always mindful of their non-Austrian readership when they describe a particularly Viennese phenomenon such as the "cultural technique of 'Schmäh' " and explain how it is used to subvert attacks by an opponent and thereby render oneself unassailable. When the German "BILD-Zeitung" recommended that she invest her prize money in psychotherapy, the Nobel laureate dryly countered, "Well, I'd certainly never spend a million Euros on a therapist. I'd rather buy myself a Japanese dress instead."

Elfriede Jelinek's texts are rarely easy to read and are also not easy to digest. Verena Mayer and Roland Koberg do not explicitly "warn" potential Jelinek "newbies" about the massiveness of the original works, but this book produces such a strong desire for more of Jelinek's writing that the necessity doesn't arise.