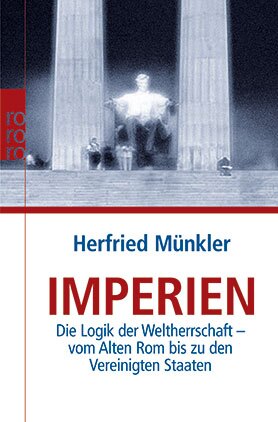 In his new book, Herfried Münkler treats the nature and significance of empires, a field of research on which no new studies have been conducted for a long time. Numerous publications in recent years have dealt with the global political role of the United States, but Münkler feels that most of these assume a “normative, evaluative perspective” that aims to support the proponents’ “long since preconceived positions.”

Münkler’s examination, on the other hand, approaches its subject in a “descriptive, analytical” manner. By describing and comparing the historical world empires and examining their actions both at the center and the peripheries, he makes it possible to draw conclusions about the options and risks facing empires in general. Many of these conclusions can be applied to the current global situation, thereby shedding light on the role and actions of the United States. Münkler does not take sides, he simply takes up the central question behind many of the crucial debates concerning the United States: “Does the world community need to rely on a supreme, imperial power for its own security? Or does this imperial power represent a grave disruption of the world order. …?”

For now it will be left open whether or not viewing the patterns of action of an imperial power from its own perspective and inner logic, as Münkler is occasionally accused of doing, is in itself assuming a “Machiavellian” point of view. Counterplans often introduce the Kantian notion of the peaceful and egalitarian coexistence of countries. Münkler’s book aims precisely to avoid such a polarization of perspectives, since it is of course far from Münkler’s intent to undervalue, let alone depict as naïve, the ideal of peaceful coexistence of peoples. He says it is important to consider, however, that the European experience is not always directly transferable to all other regions of the world. Since the decline of the Roman Empire, no significant imperial power has been able to develop in Europe. All European world empires, such as the Spanish, Portuguese, or British empires, were centered in Europe, but their peripheral expansion was located in Africa, Asia, and the Americas. Within Europe, a model of equal states under international law developed, whereas the political structures in most regions outside of Europe are based on contrasting experiences that might cause other political paths to seem more appropriate.

Münkler divides his book into six chapters, which lead step by step from a definition of the term empire as opposed to imperialism and hegemony, to a typology of the world empires, and to patterns of actions taken by imperial powers. Finally, he offers an analysis of the current world situation along with prospects of future options open to the European community of countries. In addition to notes and an extensive bibliography, the appendix also provides maps of historical empires from Ancient Greece to the empires of the Mongols and Chinese, Spanish, and British, right up to the current stationing of U.S. armed forces throughout the world.

Münkler first develops a definition of the term empire by describing spatial and temporal characteristics that need to be satisfied in order to speak of an empire in the first place. He also contrasts the term empire to that of state and hegemonic state. What conditions favor the development of an empire? The third chapter is dedicated to a typology of historical empires. Whereas the steppe empires such as those of the Mongols only advanced from the center out to the peripheral territories for booty, the classical thalassocracies such as Portugal and England controlled the trade routes and movement of goods, integrating areas far removed from their imperial centers into their trade relations. Large territorial empires, finally, needed a large military apparatus in order to secure the huge land areas.

In order for empires to remain secure over time it is imperative that they integrate the margins, letting them participate in the profits in both material and nonmaterial terms. No empire can establish itself long term without building up the infrastructure on the periphery. At the same time, however, this leads to a “pull of the margins”; marginal regions press into the empire’s sphere of influence in order to share in the benefits. If an imperial power can successfully pass the so-called “Augustan threshold” from expansionism to the more extensive consolidation phase by integrating the peripheries in terms of infrastructure, economy, and if possible also politics, the chances of consolidating the empire thereby grow.

Long-term high military costs and extensive infrastructural investments without the corresponding advantages for the center, on the other hand, carry the risks of “overexpansion” and thus instability for the imperial actor, who must provide some justification of his actions, especially materially, to the center. A balanced cost-benefit analysis is particularly necessary in so-called “democratic empires,” whose decisions must be legitimated by the voters.

In order to justify its actions and provide evidence that imperial action is generally necessary, the empire needs a mission. In the case of the Spanish empire in Latin America, this mission was to spread Christianity, and the British Empire asserted the principles of democracy and human rights in many places; today, the United States also has this missionary aim.

The sixth and final chapter of Münkler’s book deals with the current situation and the options open to the European countries. If Europe does not want to limit itself to participating in the costs of the imperial actions of the United States without being able to intervene in the decision-making processes, then according to Münkler it must act at least partly as an empire itself, and become actively engaged in the crisis regions beyond its perimeters.

Münkler’s work is exemplary in its consideration of the present state of research, consulting all substantial sources on the subject of empire, theories of imperialism, and the role of hegemonic powers. Correspondingly extensive is the bibliography in the appendix, so that once one’s interest in the subject is sparked from reading this very informative book, a lot more can be discovered. Münkler’s style is objective without being dry. He always illustrates his statements by means of historical examples that are easy to visualize using the maps provided.

It is through the precise analysis of imperial structures that concrete political conclusions can be drawn. That is what makes this work stand out among the many books written in recent years on the role of the United States. Münkler’s analysis offers the European situation a number of new approaches and ideas through which to position the European Union within the global power play.