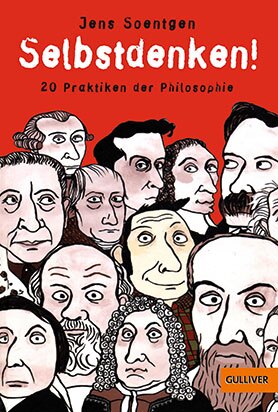 Jens Soentgen succeeds in bringing philosophy to life. Soentgen presents his subject matter in an entertaining and witty manner, making it easy to follow and to understand. The book – a twenty-first century version of Aristotle’s Topics, less bulky than the original and written in a modern and straightforward style – introduces the reader to twenty philosophical strategies, revealing how and when they can be used. Throughout the book the reader is encouraged to think for himself – Soentgen uses amusing examples (showing by the by that philosophers are also only human) as well as practical tips and suggestions for games, which allow the reader to put what he’s been reading to the test. Soentgen isn’t afraid of discussing popular culture alongside the infinitely more complex ideas of great philosophers. In a chapter entitled ‘Specifying and Defining’, he draws on two examples to illustrate what it means to be specific. The first example comes from Loriot’s film Pappa ante portas:

MR LOHSE From now on I’ll be devoting all my time to… errm… to my family.

MR LOHSE Errm, yes! You could put it that way.

The second example is taken from a debate between Jürgen Habermas and Karl Popper:

HABERMAS Theories show themselves to be applicable to a specific subject area if real diversity conforms to them.

The book also stands out in terms of design: the illustrations are clever and original, and the layout is clear. The chapters are relatively short: concise enough not to intimidate newcomers to philosophy, but long enough to allow each argument to be properly developed. Of course, some themes require more explanation than others, which is why ‘Waiting’ takes up only four pages, while ‘Logic’, the longest chapter in the book, necessitates a full twenty pages, including numerous illustrations.

When the subject matter starts to get difficult, Soentgen subdivides the chapters into smaller sections, using helpful headings to guide the reader through the text.

As Soentgen discusses a range of themes, he takes care to adapt the form of the book to its content. Soentgen isn’t interested in forcing the different strategies into a standarized account. That’s why he uses a wide variety of examples, ranging from anecdotes from ancient Greece, verbal duels from the world of physics, arguments between ordinary people – referred to as ‘Mr and Mrs Smith’ – to diagrams (borrowed from the mathematician Leonhard Euler) serving to illustrate the Aristotelian syllogism. What matters is not the origin of the examples, but their usefulness in explaining the subject matter.

Soentgen’s tone is not that of the superior schoolmaster: his book gives the reader the agreeable impression that no question is too silly to ask. Even though you suspect that the author prefers some of his philosophical colleagues (past and present) to others, the book is written with enormous sympathy for the many philosophers and theories it discusses.

The following list provides a brief summary of the main topics and examples discussed in the individual chapters:

On the subjectivity of facts and the perspectivity of things
Taking philosophical comfort: seeing unwelcome facts in a new and different light
The possibilities of citation: creating new contexts
Distortion or implying that your interlocutor doesn’t understand

Leonard Euler’s Three Truths
Are some thinkers overrated?
Dismissing arguments because of the company they keep
Thinking for yourself as a consequence of witch hunts
Thomasius’s theory of prejudice

Examples serve to illustrate and not as proof
Prophecies are ‘examples in the future-tense’
The difference between illustrating and justifying: a numerical explanation

Being specific: synonyms as a way of making useful distinctions
On the difficulty of general definitions and the usefulness of specific ones
Stumbling blocks on the way to definitions

Metaphor, allegory, analogy and comparison
When a parliamentary election resembles a football game
The dangers of making comparisons
The usefulness of unexpected interconnections

Two types of file-card system: Luhmann and Bacon
Excursus: what type of reader am I?

How to disarm an opponent by making him look ridiculous: philosophical mobbing

The desire for eternal life or the return of the same: Jonathan Swift and Friedrich Nietzsche
The theoretical hunt for the right form of society: John Rawls and the veil of ignorance
On creativity and originality: Eco, Borges, Lewis Carroll and maps to the scale of 1:1

On the merit of waiting while you’re thinking

Turning the tables
Changing the order and finding new meanings
Using the arguments of great philosophers to disprove their own theories: Kant, Carnap and Einstein

‘Pure repetition’ as used by advertising agencies and politicians
On the recurring ‘end’ of physics
Randomness as ‘chaotic series connection’: the cacophony of counter-arguments

The intoxicated priestesses of Delphi and their amazing prophecies
Excursus: Spirituality and the ancient Greeks

Llull’s combinatorics: ideas on wheels
Aristoteles and Habermas
When will it all have been said? Leibniz and the sum of all possible statements

The principle of sufficient reason and the notion of multiple causation
Aristotle’s system of the Four Causes
Apportioning and erasing blame: the search for different causes