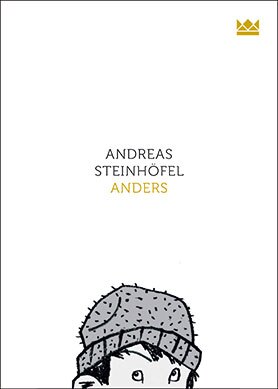 Andreas Steinhöfel has written some twenty books for children and young adults and carried off every major German award for the genre. Among the best known of his many memorable characters are the unlikely boy detectives Rico and Oskar, who are loved by young readers precisely because they are not heroes in the usual way but just ordinary kids. In a recent interview, Andreas Steinhöfel announced that it was time to write something completely different. His latest novel Anders – with its extraordinary main character and unusual approach to storytelling – is exactly that book.

The protagonist of Anders is eleven years old. Until he suffers a near-fatal accident he is known to everyone as Felix, meaning ‘happy or lucky’. But when he wakes up nine months later he remembers almost nothing of his former life and re-names himself Anders: literally, ‘other’. The change goes deeper than his name: the boy is nothing like his old self. He has lost his memory and gained new skills. He experiences synaesthesia: people and music appear to him as colours. He no longer struggles with maths, and has mystical powers that allow him to gaze straight into the heart of anyone he meets. People keep their distance from him. Felix was a bland kid who went along with the crowd. Anders does exactly as he pleases.

Those around him struggle to cope with the change. His parents, teachers and classmates try to make allowances, but find his behaviour unnerving and strange. What is more, a mystery hangs over his past. Something terrible happened before the accident and Anders has no recollection of it. His amnesia is a form of relief – but from what?

Andreas Steinhöfel has taken an enormous gamble with this book. Numbers take on mystical significance in an otherwise realistic plot. Surreal scenes and the legend of a water nymph shift the novel into fairytale territory to which Anders seems to belong. Scrutinizing everything with his cool grey stare, he refuses to let anyone close. His perceptiveness seems uncanny and he remains a mystery to the reader. We see him only through the eyes of those around him and never know for certain what is going through his mind. Throughout the novel Steinhöfel treads the borderline between realism and magic, while constantly shifting between narrative planes. It is an incredibly daring performance – and it works.

At the heart of Anders is a question. What happens when a small component of an apparently functional system is substituted for another? Steinhöfel’s answer is clear. Everything changes. The transformation of Felix into Anders affects not only his family but also the whole village. Everyone is forced to review their thoughts and actions and decide on their position. They all have to let go of the old Felix and accept the new Anders. They have to re-evaluate their own lives and try to start again. Some succeed; others fail.

Anders is not a psychological novel or a fantasy book, not a fairy tale or a crime story: it is all of these things. Above all, it is a book about forgetting and remembering, guilt and growing up. Composed in many different tones, it is poetic, funny, sad, and incredibly light. It combines striking imagery, thoughtful observations and enchanting descriptions of the Lahn region – home to the book’s protagonist and author. The final pages, which see Anders turn back into Felix, bring this multilayered and illuminating novel to a wonderfully satisfying end.

After the accident - time and the world were disconnected. For 263 days the boy called ‘Winter’ had been in a coma, which, ironically, was the exact number of days that his own mother was pregnant with him 11 years prior. The people around him then experience a miracle: On a gorgeous summers day Felix Winter returned to life, but he now refers to himself as Anders? He has no memory of the time before the accident or the accident itself...however there is someone who will do anything and everything to ensure that it stays that way.