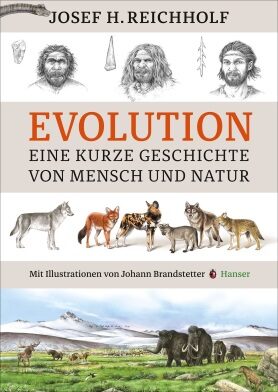 Why are we the way we are

An era of major climatic fluctuation began around two million years ago. Hippopotamuses were sometimes romping about on the banks of the Thames; as were shaggy-haired woolly rhinoceroses on the frozen ground of Central Europe. The ancestors of modern humans had to figure out how to survive. And they did survive. Their brains increased in size, their larynxes shifted lower, making speech possible, and that in turn improved their ability to work together. Human babies were born increasingly early, and the mothers, who had long since started walking on two legs, could carry them when it was time once again to migrate, sometimes to the north, sometimes to the south, wherever it seemed that life would be easier. Thus, climate change probably made us more intelligent.

In his new book, biologist Josef Reichholf, a disputatious environmentalist who has been acclaimed for his understandable science books, does not just recount the history of evolution from the primordial soup to the human being; he starts with humanity and shows us how knowledge of evolution can help us understand why we are the way we are.

Evolution, according to Reichholf, stands for diversity. It never attains a stable, much less an optimal state. It does not know purpose, only changes, which either help or hurt those affected. Just as black skin is advantageous in bright sunlight where solar radiation is intense, white skin is beneficial in colder climates where people have to wear clothing and the few remaining exposed skin areas need to receive enough sunlight for their skin to absorb sufficient vital vitamin D.

Regarding human natural history, Reichholf explains how genetic family trees are created and what they reveal about us, our ancestors, and their dispersal throughout the world. Not only do they tell us that humans came from Africa, but also that the migratory movements were so complex that it makes no sense to speak of human races. The genetic diversity within a group of people is greater than the differences between the different "cultures" or "peoples" who like to think of themselves as a unit.

With respect to the natural history of the oldest pet of humans, the dog, Reichholf describes the mechanisms of evolution, such as that mutations in regulator genes can have a great impact very quickly. Here too he does not shy away from relating the theory of evolution to current problems: When humans practice extreme breeding of dogs that cannot survive on their own, it should give us food for thought when we consider intervening in our own evolution. It shows how difficult it is to make sustaining plans for the future.

Of course Reichholf’s story of evolution also includes the classics: the tree of life, which connects all forms of life, plants and animals and humans; the dinosaurs and their extinction triggered by the impact of a comet; and the diversity of bird beaks, which shows how different species specialize on a particular food source or way of life.

Reichholf follows a common thread connecting all this diversity. Evolution, he says, means becoming more independent of the environment. This process started around three-and-a-half billion years ago, when the first cells isolated themselves from their surroundings and strictly controlled what was allowed in and what was not. Today a complex brain is well-protected in a sturdy skull and with its help human beings, more than any other species, have emancipated themselves from nature. Might they even be going too far?

In the third and last part of the book the author returns to humanity and asks about its future: We are by far the most warring living beings on earth, Reichholf declares, and a double-page illustration depicts the "progress" in weapons technology from the hand axe to the machine gun. Aggression and the willingness to defend one’s own group against animals and other people have long benefitted humans in the history of evolution. Now they are causing problems for our coexistence. Can we be both human beings and humane, asks Reichholf. He sees hope in the connecting power of the digital media. The computer generation is the first generation to have the means and the language through which individual human beings can be united into one humanity.

Reichholf has once again written an extraordinarily readable book. Numerous drawings by illustrator Johann Brandstetter accompany the explanations; important key words are highlighted in color; boxes at the margins provide summaries or additional information. But most importantly, Evolution: Eine kurze Geschichte von Mensch und Natur (Evolution: A Short History of Humans and Nature) shows that evolution is not just a boring theory, but instead it helps us understand ourselves and some of our most pressing concerns.

Manuela Lenzen is a freelance science journalist. The main subject areas of her writing are evolution, cognition, and artificial intelligence.

Based on the commonplace experiences of young people and adults, renowned biologist Josef H. Reichholf takes us through the story of the genesis of nature and mankind. What makes mankind what it is? What makes us human? We speak different languages, follow different religions, rituals and customs, we have different habits – what’s the common denominator? Why are we different, what do those differences reveal about our origins and what do they mean for the future? In an accessible style, the author combines fundamental knowledge with astonishing discoveries from cutting-edge research. He takes a glimpse into the future, in which new technologies will connect people all over the world to an even greater degree. Given this growing network, it is more important than ever to understand how innovations come into being and establish themselves in the evolutionary process.