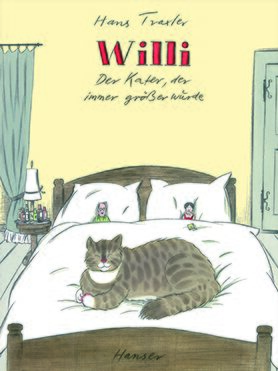 The Germans certainly love their animals. As far as cats are concerned, some view these felines as a danger to native bird populations, whereas others have a different kind of trouble with their freedom-loving and uneducable pets. That said, cats in this country are spoiled creatures, lavished with care in a way that's almost neurotic. The days are over when cats were revered as gods – in Ancient Egypt, for example – because they offered protection against the mice and rats threatening vital grain supplies. While it’s true that cats are still useful on farms, in this part of Europe they are mostly pets who serve the social needs of their “owners” (a word most cats resent).

It’s in this milieu that 85-year-old satirist, cartoonist, painter, illustrator and children’s author Hans Traxler sets his sage and witty picture book about a farmer’s tomcat that a married couple chooses to welcome into their home. The couple takes in little Willi as a house pet. And Traxler asks the tongue-in-cheek question: what if a skinny, newborn kitty-cat is fed and coddled so much that eventually it outgrows itself and turns into a monster cat?

The caricaturist takes an ironic look at the love of animals as objects of our own neediness. The very first page presents the profound and dismal picture of an older married couple, living a seemingly satiated bourgeois life. The framed family portraits on the wall give an inkling of why the two feel so lonely: they’ve lived alone in their house ever since their only son moved away. “He lives in Greenland now, and is married to an Eskimo woman.”

There they sit, proud but forlorn parents, who seem to shrink amidst all their furnishings. That is, until a little kitty enters their lives. They take in Willi in place of their only child, lavishing him with love and affection. But the cute little animal doesn't seem to stop growing, is soon taller than both its owners and occupies the whole of their beloved couch. Before long the entire living room has to be vacated to make room for Willi. And the cat just keeps on growing. In the end, the animal is examined by world-famous professors who discover an unknown virus responsible for Willi’s unchecked growth. The professors order Willy to be locked up in a lion’s cage. This, in turn, upsets some animal rights activists, who promptly begin to picket their home, demanding Willi's freedom. This, too, is yet another symptom of a multifaceted society of affluence: lobbyists of every stripe perpetually trying to grab the public’s attention. The protests are successful, and Willi is merely put under house arrest. To come straight out with it, the story naturally has a happy ending, as a more or less distinct and inherent need puts an end to Willi’s growth and begins to shrink him back to normal size: the tomcat’s desire for freedom on account of the cute little she-cat posing outside the window, just out of Willi's reach.

Hans Traxler’s true graphic talent is his ability to tell a complex story with just a few seemingly effortless strokes and simple coloring – and this in a very plausible setting, accurate down to the very last detail. His gift as an artist means that, first, we almost believe the story and, second, his ironic undertone is clear, at least to an adolescent reader. For children, Traxler’s “Willi” might just be an amusing story with a few subtle hints at human virtues and foibles. For adults the story is more: a satire of middle-class pleasures and poverties. A satire that loves the characters it depicts. And if you look just a little bit closer, you might even think that “Willi” is a minor sociological study on “German sensitivities.”

The Lohmeiers adopt a kitten so that they’ll always have someone to talk to. But the cat just keeps growing and growing…
Mr Lohmeier and his wife felt lonely in their house until they took in the last and smallest kitten from the farmer’s litter. How cute he was! They called him Willi, because cats respond well to names with lots of »i’s« in them. But Willi just wouldn’t stop growing — before long he was taking up the whole of the car’s passenger seat and Mr Lohmeier had to give up his beloved midday-nap couch as Willi kept getting bigger and bigger. Rumours started spreading: »There’s a monster living at the Lohmeiers!« Trappers and TV teams appear on the scene, but the Lohmeiers have no intention of giving up their beloved Willi. Then one day Willi spots a little red cat in the garden through the window and falls in love with her. The trouble is he’s too big to get out! But when Willi wants something, he’s sure to find a way of getting it…