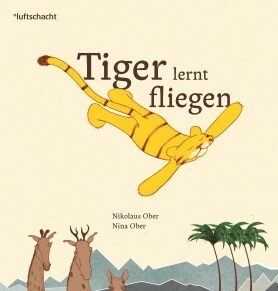 Achieving the Impossible through Sheer Imagination

The young tiger is bored. As he wanders disgruntled through the heat of the jungle the monkeys are swinging around happily in the tops of the trees, and even the parrots are zooming around in the sky full of pizzazz. Yes, boredom can be a real challenge, a testing time that every child has experienced at some point. But if we can only battle our way through these agonising periods when absolutely nothing happens, then promising opportunities for creative activity will always beckon on the other side. However, we need to actually grasp hold of one of these many opportunities that life offers us. Our young tiger is already on the right track when he starts playing football with the vultures. It’s not long before he comes across the gnu and learns how to sing. His mood improves, he ambles through the jungle, whistling as he goes, and the monkeys invite him to take part in their theatre performance. But it’s only when the tiger starts gazing up at the birds winging their way through the air that his dreams really start to take shape.

The tiger will learn how to fly: that is the promise vouchsafed by the title of Nikolaus and Nina Ober’s picture book, which proves to be an excellent antidote to boredom. It carries its audience on a journey that happens not least within their own heads. For when children are bored they begin to transform the world in their imagination, they begin to bring it to life - provided that they have not been put off their stride by a television set, which would have performed that particular operation for them. Anyway, the tiger wants to learn to fly - and it makes not a scrap of difference that he couldn’t possibly be worse equipped for such a venture. The defiant doggedness with which he pursues his ambition brings him much valuable experience. He learns a lot about the world, and he learns how to gauge his capabilities and their limits.

By no means everything goes according to plan. When he plummets to the ground the first time, we can tell how painful it must be from the faces of the penguins, whose expressions change even as they watch. Text and image mesh with each other when various actions of the characters within the narrative are complemented by sounds signalled through words included as part of the drawings. The book is suitable - indeed especially suitable - for beginner readers, who can readily see how sounds are formed. The clearly structured sentences are easy to follow, and the young reader is motivated to carry on by the fact that every successive phrase adds a new element to the unfolding story.

Nina Ober’s illustrations satisfy the need of children for realistic depictions of events, for they mimic the natural movements of the monkeys, the mice, the cranes, who are thus portrayed with great distinctiveness, just though borrowed from a book on natural history.

The tiger’s dream of flying ultimately comes to fruition thanks to an aeroplane. But this seemingly conventional turn of events does not disrupt the story-line in the slightest, for the tiger now has to face the challenge of learning to fly the plane, under the aegis of the clever spectacled bear. His delight at his success is plain to see, indeed the entire book radiates a sunny atmosphere right from the yellow of the front endpaper. Handy in format, the book offers a mix of fairly standard depictions of the tiger together with much more ambitious and generously sized double-page spreads. Even without knowing the story, younger readers can gain a lot from simply following the antics of the animals in the illustrations - antics that are appealingly reminiscent of human beings.

It’s hard to believe, but sometimes even tigers get bored. Neither playing soccer with vultures, singing with the wildebeest, nor acting with the monkeys can help the tiger get rid of his boredom. The tiger comes up with a great idea one day: he’ll learn to fly! But this proves to be more difficult than expected: the nasty cranes laugh at his first failed efforts...until the clever spectacled bear gives his tiger friend a hand...