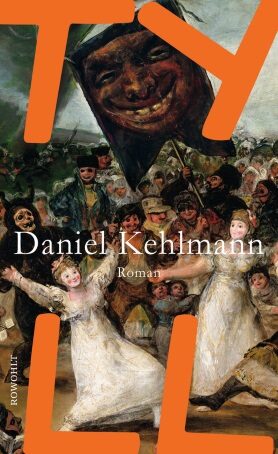 One of the key phrases in Daniel Kehlmann's novel occurs at the end of the exposition, when Tyll Ulenspiegel incites an entire village to go on a rampage: he, the skillful acrobat, balances over the heads of the rioting crowd on a rope, and the village's collective narrative voice declares: "We understood how life can be for a person who really does what they want and believes nothing and obeys no one; we understood how it would be to be such a person, and we understood that we would never be such people." And then Tyll shouts down to the crowd from above that they should remove their shoes, each one the right shoe, and throw it into the air. When they obey him, the fascinating fool laughs at them, insults them, and urges them to go and look for their shoes. Ulenspiegel observes the mass brawl that ensues with great amusement. A year later, death visits the village in the form of the Great War and the narrative voice utters the pivotal sentence: "For it is not so long ago."

Critics and readers unanimously agree: Daniel Kehlmann’s "Tyll" is no less a masterly historical novel than "Measuring the World" (2005) had been. A novel that captivates with its playful elegance, remarkable talent for dialogue, and a great sense of comedy, not to mention how supply the characters are wrapped in his language. So why write an historical novel? To show it is not so long ago. Kehlmann enjoys the greatest possible artistic freedom in Tyll: he takes a genuine historical figure as his protagonist and places him in a different era that works most advantageously for his narrative project. Till Eulenspiegel, according to the records, was born in 1300, and was considered an exceedingly intelligent and eloquent person, who enjoyed playing tricks on his fellow humans, especially ones that exposed their shortcomings. Kehlmann, however, locates him in the middle of the 17th century, during the Thirty Years' War. And this transformation functions so fabulously because Kehlmann makes it plausible through the way he constructs the novel.

Perhaps the most powerful passages are those in which Kehlmann portrays his hero growing up in poverty, while simultaneously creating a portrait of his father, who was a miller and an autodidact, who strived for nothing less than gaining knowledge of the world, who in his research did not draw a line between scientific knowledge and what was considered heretical magic. The fact he could not read Latin, and therefore was unable to understand the books he used for his explorations, is one of the book’s many wicked ironies. But it didn’t change the fact that he was tortured by henchmen from the Catholic Church to make a confession and then executed. From then on, Tyll traveled the country as a fool. Daniel Kehlmann creates a vast panorama of the Thirty Years' War with the Tyll figure as the center of his novel, underpinned by a wide variety of characters.

Kehlmann changes perspectives. We get to know the Bohemian Winter King Frederick V of the Palatinate, whose political actions basically were the catalyst for the war, and his wife Elisabeth Stuart, who Kehlmann portrays at the end of the novel as a cunning and skillful diplomat. We are drawn into the last great battle of the war near the Bavarian town of Zusmarshausen. And between all these world events, Tyll dances throughout as the eternal fool; as one who can do everything, and for whom everything is allowed. As an immortal. Religion, intrigues, plots, fanaticism, cowardice. Once again: it is not long ago. Or put differently, it never ends.

That Daniel Kehlmann has reached deep into the toolbox of his trade and skill as an author to portray the eternal constants of human foibles, that he breaks with chronology as nimbly as with all causalities; that he quotes from literary history, borrows motifs, and plays around with them like a happy child – all this may be granted him.

On the one hand, because it is in the service of pleasing his readers. On the other, because Kehlmann has succeeded in something like an act of liberation with "Tyll": Finally, we once again have the impression that we are dealing not with just a brilliant author exhibiting his virtuosity for its own sake. Language, form and material combine in "Tyll" to create a work of art that is more than just a picaresque novel.

The vagrant, actor, entertainer and provocateur Tyll Ulenspiegel is born in the early 1600s. Tyll’s father, a miller, is also a magician and explorer, and soon arouses the ire of the village churchmen. Tyll is forced to flee, accompanied by Nele, the baker’s daughter. During his travels through a country devastated by the Thirty Years’ War he meets both ordinary people and great souls. These include the young academic and writer Martin von Wolkenstein, who’s dying to find out what war is really like; the melancholic executioner Tilman; Pirmin, the juggler; Origines, the talking donkey; the exiled rulers of Bohemia, Elizabeth and Friedrich, whose mistakes sparked this great war; the doctor Paul Fleming, whose bizarre plan is to write poems in German; and, not least, the fanatical Jesuit Tesimond and Athanasius Kircher, the renowned sage whose biggest secret is that he forged the startling results of his scientific experiments. Their stories come together in a spellbinding narrative, and an epic re-imagining of the Thirty Years’ War. And who should this violent whirlwind envelop in its fury if not Tyll, the well-known prankster who one day decides to become immortal?