In his 2009 novel “The Best We Had”, Jochen Schimmang created a portrait of a generation that has long been sorely neglected in literature: the generation for whom the good old peaceful Federal Republic had been an inner homeland. They were, you might say, the mirror image of the East Germans, whose country had been taken from them, and they too had to mourn the loss of a refuge that had given them their identity. “New Centre”, Schimmang’s new novel, is skilfully interwoven with his preceding book, though it is dedicated to the darker side of this emotion.

Berlin, in the year 2029. For nine years, a military junta ruled the country, under the leadership of General Rotkirch, who was set up by those with the real power as a figurehead for the masses. He has now gone to ground, and Germany has spent four years under the rule of British occupying forces. An interim government, put in place by the Brits, is currently being installed. Ulrich Anders, born in the mid-eighties of the preceding century, is asked by Zander, a friend from his student days, to help him put together a library in the capital. Anders spent the years of military dictatorship in a kind of inner emigration, as a dealer in semi-luxury goods in Aachen. He now travels to Berlin - and finds himself in the no-mans-land of the former government quarter, an enclave which is a near-paradise of creatives, anarchists, drop-outs and former resistance fighters, who now live by their own rules. They don't notice that outside their field of vision, the threat of a counter-revolution is starting to loom.

Jochen Schimmang’s storytelling sparkles. In “New Centre” he succeeds in creating a believable portrayal of the widest variety of milieus, and in using what is purportedly a science fiction novel to create a testing ground, in which Germany’s past, present, and a vision of its projected future meet. The very concrete, researchable Bonn of "The Best We Had" is now set against an imagined Berlin. The centre of the city (and of the country as a whole) was once in the iron grip of a murky dictatorship, but is transformed by Schimmang into an almost utopian place of hope, a blueprint for an alternative to the somewhat less joyful reality that surrounds it. It houses a clique who today you might call "“Digital Bohemians", a collective of young, gifted computer programmers. There are also old-fashioned trades like button-making, and an elderly gardener, who proves to be the philosophical backbone of the community. And a restaurant by the name of ‘Le plaisir du texte'.

Schimmang’s sense of possibility makes this possible, And not only that: “New Centre” is also a clever literary game which runs through various eras. Not without reason does his protagonist have the same forename as the hero of Robert Musil’s “Man Without Qualities”, a novel about which Ulrich has a revealing conversation with his new girlfriend Eleanor Rigby (!). It’s no coincidence that the military junta’s highly influential, larger-than-life legal advisor, whose library Ulrich evaluates for purchase, is reminiscent of Carl Schmitt. And it’s certainly no coincidence that in this future scenario, it is the book that asserts its place as the medium of enlightenment. Even print media undergo a miraculous resurrection. Schimmang marshals a colourful collage of epochs, lifestyles and attitudes, theoretical discourses and philosophical positions. However, to call “New Centre” a postmodern novel for that reason would be to do the book an injustice – it’s too entertaining and not taxing enough for that.

So what does Schimmang write about, in his report from the year 2029 and its bitterly cold Berlin winter? As in every good social novel, he writes about all of us, about the country in which we live, and about the historical continuities that accompany every apparent radical change. And we have a pretty decent clue as to what the catalyst for the novel might have been: "There was," it says in reference to the year 2009, "simply an empty space there, and the Generals barged into it. They also had no desire to continue being directed by incompetent defence ministers.” So sometimes even those are good for something. In literature, at any rate. 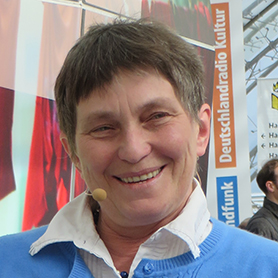 I started translating while at school (poems by Goethe), later, after earning a degree in German Studies at the university (1980-1990), I participated in a translation seminar at the Leningrad Writers’ House (Dom pissatelej); I started publishing my literary translations as of the mid-1980s, the first work was by Gottfried Keller.

What particularly drew you to (“Neue Mitte”)?

The author skillfully combines a postmodern structure with contemporary issues, such as dictatorship, information society and freedom.

The interweaving of real and fictional facts and names in the novel required a particular kind of research and review.

I would like to acquaint Russian readers with new trends in German literature, show new artistic methods, relate important questions, help acquaint readers with different modes of thinking in different cultures, and - simply entertain the reader.

Do you mean writers from Germany? It would be easier if we just called them German language authors: Elfriede Jelinek, Elias Canetti.