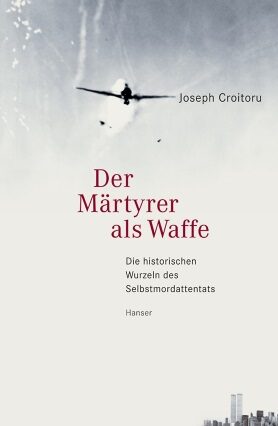 The title alone, “Martyrs as Weapons,” gives an early indication of Croitoru’s purpose with his new book, which is to show two different sides of the people who commit suicide as an act of assassination—as perpetrators and as victims, a kind of weapon in the hands of others. Croitoru describes a wide arc, stretching from the Japanese Samurai tradition, through North Korea’s propaganda of “a thousand living bombs,” to suicide bombing in Lebanon and Israel, and finally gives us an analysis of al Qaeda’s global terrorist network as the latest chapter in this story. He employs fine linguistic means to distinguish between suicide attacks in a military context and suicide bombing, distinctions that are perhaps too fine for a quick read. By taking into account the perspective of the perpetrators, he also explores that element of “free choice” propounded by those responsible in both cases to show that the actors themselves often see no alternative to their actions.

Right from the introduction, the author emphasizes that certain preconditions must be met before suicide attacks and suicide bombing will find social acceptance and ready actors in a given society. These include most especially a deeply rooted belief in a hereafter where the martyr will be rewarded, a patriarchal society that has retained a pre-modern warrior ethos and an honor code that includes blood revenge, and continuing national oppression in which deprivation of rights and degradation by a militarily superior opponent have long since become routine. These opening comments make clear that Croitoru’s purpose is not to place blame but rather to understand a phenomenon that is so difficult to comprehend, especially for Western observers.

To sacrifice one’s life for an ideal, a nation or an emperor is a rather foreign concept for the Western world. In Eastern cultures, on the other hand, it has a long tradition, as Croitoru illustrates in detail on the basis of the ethics of the Japanese Samurai and its exploitation by the Japanese military. This development found its most extreme expression in the massive use of Kamikaze fighters in the Pacific at the end of World War II.

The author explains the fact that this form of attack found its way around the world through the survival of the concept of the “living bomb,” which is still promoted today in communist North Korea. Croitoru argues that in the early 1970s, as left extremist groups in many parts of the world took up the cause world revolution, contacts were forged in North Korea between such revolutionary organizations from Japan and the Near East. One outgrowth was the first suicide attack in the Middle East, which was carried out by the Japanese Red Army Fraction in May 1972 at the Tel Aviv airport.

This attack by three Japanese men exerted enormous pressure on Palestinian groups to make a name for themselves with ever-increasing violence, resulting in a wave of terrorist suicide attacks aimed primarily at civilian targets that shook Israel during the 1970s. The instigators of these attacks were various Palestinian organizations competing with each other for the title of leader who politically justified their actions as serving the national liberation of Palestine from “Zionist-imperialist” oppression. At that time, religious motivations played little if any role at all.

Even then, however, the media marketing of the martyrs was critical and acquired a format that remains typical today: the public claim of responsibility by an organization and a press conference are followed by the release of the martyr’s last will and testament, either in the form of a recording or a videotape. This cultivation of the martyr’s image, even among non-religious Palestinians, together with “Palestinian training” in the UN Relief and Works Agency schools and paramilitary youth camps, result in a high level of willingness among young Palestinians to volunteer for suicide commandos.

Croitoru explains that this ideological about-face from political to Islamic forms of justification grew out of trends involved in the struggle in Lebanon, where Iranian fundamentalist leaders and Syrian overlords competed for spheres of influence. Their main tool was financial and logistical support for “their” combat groups. Constant human rights violations by Israeli occupation soldiers provided another reason for the rapid growth of groups such as Hezbollah (“Party of God”), the Shiite Lebanese AMAL, and the Lebanese Syrian Social National Party.

The outbreak of the first Intifada in 1987 shifted the attention of world public opinion back to Israel and Palestine. A Muslim brotherhood, which had been founded in Gaza in 1978 and initially focused on the social concerns of the population, grew to become Hamas, an Islamic resistance movement whose long-term goal is the destruction of Israel and the re-Islamization of “all of Palestine.” Islamic Jihad, a radical split-off group, and Fatah, the military arm of the PLO, have also laid claim to leadership of the Intifada. The PLO’s negotiations with Israel that led to the Oslo Accords and events within Israel gave rise to another wave of terrorist activities that eventually came to a head in the so-called al Aqsa Intifada.

The fact that suicide bombing has become international in its application can be illustrated in locales as varied as Sri Lanka, Kashmir, Chechnya or Kurdistan. Osama bin Laden himself benefited from this global networking and acquire international experience as he built up al Qaeda and prepared the attacks of 11 September 2001. The crucial difference in relation to previous Islamic terrorist organizations, however, is the fact that al Qaeda does not draw its motivation from a struggle for national or regional interests but rather from a vision of Islamic world domination.

With this detailed account, Joseph Croitoru, an authority on the Middle East, provides insights into a critical chapter of current history. His exacting research and balanced judgment help make a mass phenomenon intelligible that otherwise remains almost incomprehensible.