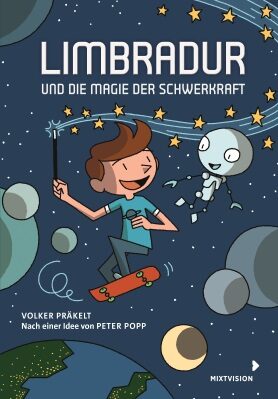 Off into space - physics for trainee wizards

‘Physics’ and ‘wizardry’ can sometimes seem synonymous not only to those with little understanding of science, but also to those who are passionately interested in it. It is thus altogether appropriate that nothing less than a magic wand should be the main appurtenance of Limbradur, alias Luke, when he discovers more about the theory of relativity and gravitational waves as the protagonist of this part-fiction, part-non-fiction book Limbradur und die Magie der Schwerkraft [‘Limbradur and the magic of gravity’].

But let’s take things from the beginning! Lukas - aka Luke - Jacobsen is almost twelve; he has a little sister, and for her amusement he sometimes turns himself into Limbradur, a trainee wizard. His mother is dead; his father makes robots. Luke thus imbibed a modicum of scientific understanding along with his baby milk. He has a particular weakness for space travel, and dreams of becoming an astronaut. In the meantime, however, his most pressing wish is to be invited to Ole’s birthday party. Ole, the top dog in Luke’s class, has set all his potential guests a dare - and if they chicken out there’ll be no invitation. Luke’s challenge is to sneak into the new Albert Einstein Museum in the middle of the night and come out with a ‘souvenir’, which will more or less count as his ticket to the party. And so it is that Luke finds himself at the door of the museum, magic wand in hand - though in fact he had only taken his wand with him because he’d told his sister that he was going to a trainee wizards’ meeting.

Even though he doesn’t meet any trainee wizards in the museum, there turns out to be plenty of magic all the same - thanks to Alby X 3. This diminutive airborne robot is as pert as he is precocious, and knows all there is to know about Einstein, quantum physics, and the theory of relativity. He takes Luke on a thrilling journey through space and time, for during his stay in the Albert Einstein Museum Luke not only gets a nocturnal private tutorial on space-time theory, instruction on both the difference and the connection between mass and weight, and copious information on the biographies of Isaac Newton and Albert Einstein - Alby also takes him off into space to ‘Albia’, his personal space station. When Luke finally finds himself standing in the foyer of the museum once again - completely bowled over by his nocturnal adventures - he discovers that he has even brought a little souvenir back with him. But he doesn’t need a souvenir any more - at any rate not as a ticket to Ole’s birthday party: after all, if you’ve travelled through space you aren’t going to be all that desperate to have a show-off for a friend, are you?

Just as Alby and Luke whizz and whirl around the universe at the speed of light, so, too, concepts and definitions from the world of physics and maths swirl about in Limbradur und die Magie der Schwerkraft, accompanied by a plethora of anecdotes and biographical details - all brought into sharp relief by Ulf Kreyenburg’s drawings in comic-strip style. To some extent Volker Präkelt operates according to the principle that ‘more is more’ (no wonder given the context of ‘mass’ and ‘weight’...): a magic adventure story is combined with a confidence-building family-focused tale for the purpose of encouraging the reader’s inquisitiveness about the laws and theories of physics. This neat idea of conveying scientific knowledge by packaging it within a tale full of spills and thrills certainly works: it makes even physics no-hopers like me appreciate the fact that quantum physics really can be extremely fascinating!

What with Isaac Newton’s apple, Albert Einstein with his tongue sticking out, and of course E = mc2, Limbradur und die Magie der Schwerkraft succeeds in making the sciences appealing to those new to the realm of physics. The idea for the story derives incidentally from Peter Popp’s 360-degree film of the same name, screened in numerous planetariums. Whilst it is true that in the film one can actually see Alby and Luke on their journey through space, the book offers the inestimable advantage that we can pause for a while, or turn back to a previous page. And for those who can’t always quite keep up with the hectic pace of the pair’s dash through material that is sometimes decidedly complex, there is a Glossary at the end in which the most important topics are succinctly and lucidly explained once again. This is definitely a big plus for people who don’t have much of a gift for science – such as me, for instance...

With Limbradur and Alby through space and time. A thrilling adventure story with a sprinkling of magic and a great deal of interesting information about gravity and other phenomena in the realm of physics.

Why do apples fall to the ground? That was the simple question that the famous physician Isaac Newton first asked himself. More than three hundred years later it was Albert Einstein who offered us a new perspective on this conundrum.

12-year-old Limbradur breaks into the famous Albert Einstein Museum one night. There he encounters Alby X3, a pint-sized oddball robot who explains Einstein’s revolutionary ideas to him and then takes him on a fantastic journey of exploration through space and time.