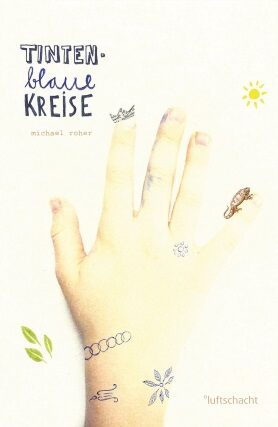 The sweet poison of conformism

The ‘ink-blue circles’ of the book’s title are a special kind of decoration not vouchsafed to everyone. 12-year-old Sabina, known to her friends and neighbours as ‘Bee’, only draws them on the forearms of people she is really fond of - such as her friend Berry Boy, for example. Whenever he visits Café Leguan, run by Bee’s parents, he immediately rolls up his sleeve, and Bee fishes out her biro and starts drawing patterns or animals on his skin. Bee’s entire life is steeped in pure happiness and sunshine; her parents treat her with love and affection, and above all she is driven by an immense hunger to know the world. However this hunger inevitably also brings her face to face with the darker aspects of existence. Thus for instance Berry Boy is burdened by a massive worry, as his son Yan needs an operation on his heart and no one can tell him whether the boy will survive it.

Bee wants to know what happens once people have died, and this constitutes one particular strand in Michael Roher’s novel. In Bee he presents us with a narrator who enjoys being liked by everyone, but at the same time is altogether capable of going her own way. Children’s literature can radiate the sense of a world that is kind and replete with happiness, and yet free of even the slightest touch of kitsch. But this world, too, is not without its conflicts - and Roher develops them with real subtlety. At school Bee and her friend Shirin belong amongst the group of ‘popular’ children - in sharp contrast to Phillip, the thin boy with the red hair. He is new to the class, and is tormented by Tenka, the son of a wealthy doctor - at first just verbally, but then by means of various ‘pranks’, such as having ink tipped into his school bag by Tenka and his gang. Phillip’s books are ruined, and he ends up with an ink-blue circle on his nose.

It is through none other than Phillip - who happens to be a particularly talented painter - that Bee learns something about death. Phillip fascinates her even before she becomes aware of it herself. Michael Roher shows how this fascination begins to produce effects in his narrator. It bothers her to see Phillip suffering humiliation after humiliation without making any attempt to defend himself. At the same time a ‘coalition of indifference’ begins to develop within the class. Even Shirin reckons that Phillip is such a wimp that, far from meriting help, he deserves whtever he gets. In the midst of Roher’s sun-filled book a dark chasm thus suddenly opens up as the class proves incapable of protecting its seemingly weakest member. And Bee herself, normally quick to respond to such situations, holds back, despite being aware of Phillip’s difficult family background, and despite having become very close to him through their joint swimming sessions: it would seem that she too has fallen prey to the cloying quiescence of conformism.

Between the lines Roher enables us to sense that Bee can’t really cope with Phillip’s wimpishness. In their conversations a harsh undertone occasionally creeps into her words that he finds hurtful. There are shades and nuances galore in this finely wrought prose, as also in Roher’s sensitive illustrations. At the same time, though, his protagonist recounts her story in a refreshingly straightforward manner, though not everything has to be revealed straightaway, leaving plenty of scope for surprises and the dramatic effects that they bring about. We sense that this 12-year-old girl has to get the story off her chest: it’s about love, after all, which at this age has no physical means of expression. But without spoiling the story we can safely say that Michael Roher comes up with a clever conclusion that works well for both the novel and its two protagonists.

Bee Sabeena has a fine old life. She spends her afternoons in her parents’ café where there’s always something on the go. She plays board games with Jockel, the café’s rhyming regular, and gets old Frau Almut - she with the bright purple lips and silver rings in her ears - to read the cards and tell her her fortune. And when Berry Boy comes by for his rehearsal with Bee’s Mum and their band, she rushes into the kitchen to make Berry Boy his favourite drink, Toothpaste Juice, and decorates his forearm with her biro: she’s aiming to become a tatooist, after all.

The idyll suddenly falls apart, however, when Berry Boy learns that his young son has a heart defect and requires surgery. No one knows whether he will survive the operation...