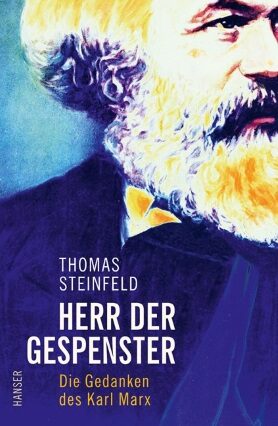 The more hermetic and “inevitable” contemporary capitalism seems to be almost thirty years after the collapse of the Soviet Union, the more interested people seem once more in theories that question that economic and social system which has been euphemistically rechristened “the free-market economy.” That’s why the German philosopher Karl Marx is again a particular focus of attention, having been summoned -- rightly or wrongly -- by that half of the twentieth-century world which was revolutionary, Communist, and controlled by planned economies. In recent years, several single-author books have appeared on the subject of Marx.
In terms of style and content, the intellectual biography Lord of the Spectres by literary scholar Thomas Steinfeld (who is also an editor at the Süddeutsche Zeitung) stands out from the various other works available. As a newcomer to the topic, Steinfeld has been viewed with suspicion by professional economists – which isn’t justified inasmuch as his arguments are lucid and unassailable from a disciplinary perspective. However, the author is particularly concerned to avoid bringing Marx's predictions up to date, as Thomas Piketty does in Capital in the 21st Century. Nor does Steinfeld at all wish to plead for a revolt or prescribe reforms of the economic system.

Steinfeld manages to avoid or completely forego those recommendations which roll right off the tongues of conventional Marxists. The closing sentence of this biography of ideas is, “Once the most important thing has been understood, one can then truly consider what to do next.” Ideological anti-Marxists might discern in this suggestion a slight threat, yet that is an unfounded claim since Steinfeld is first and foremost concerned with understanding the journalistic phenomenon of Marx. He avows that all the superficial knowledge circulating about the philosophy already annoyed him in the revolutionary 1970s. Students in those days had at most read the Communist Manifesto and maybe a few chapters of Capital; they were more interested in rehearsing the revolution than studying the classics. But that doesn’t suffice, back then or today -- as Steinfeld rarely tires of remarking. His long essay circulates around the philosophical, economic and contemporary implications of Marx's creative process -- with broad horizons yet also meticulously at times. The reader often gets the impression that Steinfeld is less interested in the economic and philosophical construction of theories than he is fascinated by the evolution of the brilliant journalist and writer that Marx continued to be through the course of his life.

As a literary studies specialist, Steinfeld is subtle when analyzing the philosopher’s multilayered language. This is an invaluable advantage, for Marx was always a man of letters as well as a philosopher and economist. To begin with, his metaphors must be correctly interpreted, something which Steinfeld succeeds at with much skill and esprit. Secondly, these tropes allow him to draw conclusions about the phrases of Marx's thinking and writing. However, Marx’s specific situation of writing and reading in the Library of the British Museum is also valuably portrayed by Steinfeld in passages that are both insightful and entertaining. He carefully examines and interprets Marx’s tireless excerpting of literature and journalism, along with his technique of using such excerpts to compose essays and books.

Time and again, Steinfeld addresses the present development of capitalism -- skillfully combining that with a close reading of the original texts – while also analyzing how it corresponds to Marx's diagnoses and prognoses. The situation has changed fundamentally in Europe and the other wealthy parts of the world: "In order to encounter the 'dark face' of global wealth, it is usually sufficient to trace the manufacturing pathways from consumer goods back to their points of origin.” Of course, those who are fortunate to have jobs in realms of prosperity don’t necessarily feel exploited anymore: “An employee may at some point get the idea that his employer is possibly earning more from his work than he does himself. He will then set his sights on increasing his earnings under the prevailing conditions. Doing so certainly doesn’t help him to escape exploitation. That, for many people at least, is obscured by their ‘freedom of choice.’”

Marx's thesis -- that capitalism will one day fail, having used up so many resources -- has only become more potent due to the current ecological situation, as Steinfeld also discerns. "What is to be done?" remains the central question at the end of his book, in addition to the hope that something totalitarian isn’t once again on the horizon. Intelligent reforms might in the end prevent risky revolutions.

​Marius Meller studied German philology, philosophy, and musicology, and has worked as a literary editor at the Frankfurter Rundschau and Berliner Tagesspiegel newspapers. He lives in Berlin as a writer and works as a freelance literature critic for Deutschlandradio and Deutschlandfunk.

It could be said that Karl Marx has been disproved by history. Very few still dream of revolution, and yet in recent times, unrest has increased: We want to know where the power has come from that causes an ever-growing rift in our world.

Thomas Steinfeld has reread Karl Marx and found an intellectual wiser than many of his critics, even where his arguments were clearly flawed. While Marx’s world view is unlikely to be sought after, he does offer an impressive analysis of the force exerted on people by money, the hidden power of commodities, or the crisis as the norm of our economic form. Liberated from a world-historical mission, this work opens the reader’s eyes to how capitalism effects our lives more than ever. 2018 will mark Karl Marx’s 200th birthday. Thomas Steinfeld shows that, even today, people who want to understand the times we live in should read him.