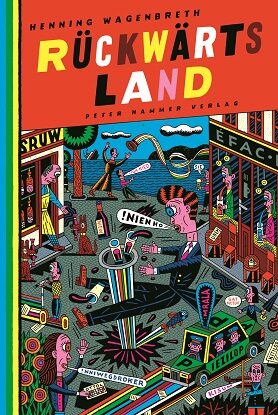 Translation Grant Programme
For this title we provide support for translation into the Italian language (2022 - 2024).

‘Odnu yldalg  dluow ew taht efil ni enod ev‘ew sgniht wef a etiuq era ereht’  — or to read this the other way round: There are quite a few things we’ve done in life that we would gladly undo, such as make amends to someone we wronged, for instance, or avoid putting our foot in it with someone, like that time when it caused so much trouble. Marty McFly in Back to the Future, and numerous other time-travellers too, have repeatedly tried it  — but, as we know, to little avail, since the space-time continuum would otherwise have been thrown into serious confusion.
In this book, however, we encounter a new attempt at a particular form of time-travel that doesn’t harm the space-time continuum in the slightest, but appears merely to suspend it for the duration, and thereby enable the beholder to pause for a while and reflect on things. The person undertaking this new venture is Henning Wagenbreth, a professor at Berlin’s University of the Arts, with his poetical picturebook Rückwsärtsland (‘Backwards-Land’). Given the mayhem that characterises our era and the ever-increasing scope it offers for us to put our foot right in it, it is easy to understand why one of Germany’s finest book-illustrators and poster artists should embark on backwards travel of this sort. And it is very appealing that he should do so by finding inspiration in a process familiar to him from his childhood, namely the practice - hugely enjoyed by children back then - of running the Super 8 film of their family holiday backwards, and thus ending up at the beginning. Did this change the story in any way? Probably not. But seeing events in reverse order, frame after frame, gave you a strong sense of how the film actually became what it became - and enabled you to think for a moment about the points in the film when you could have behaved in a different way.
Wagenbreth – clearly a man with a keen sense of humour complemented by a gift for self-mockery – wonderfully re-imagines this device by combining doggerel verse with quirky cartoons that recall the renowned ‘Neuruppiner Bilderbögen’ of the nineteenth century - illustrated broadsheets aimed at the common folk and full of gruesome street-ballads reflecting the brute realities of life. The characters and scenarios in his severely geometrical drawings with their stark colours and contrasts give the impression of having leapt from the pages of the same human bestiary exploited by Art Spiegelman and other avant-gardists in the world of comics in the mid-1900s. There are echoes, too, of the 19th century fashion for caricature, of Wilhelm Busch’s comic-strip stories, and of the characters in the work of Heinrich Hoffmann, creator of Struwwelpeter (‘Shockhead Peter’) – louche figures with bodies that look as if they have been squashed flat onto the page, and faces bodged together like monsters from Frankenstein’s laboratory. The cartoon figures are often drawn in profile, thus giving the impression of a world in which the one-eyed reign supreme. The two- and four-line verses that accompany each scenario are so catchy that the reader can scarcely resist the urge to carry them on: ‘All das tut dir heute leid. / Ließe sich doch nur die Zeit / einfach noch mal rückwärts drehen, / so als wäre nichts geschehen.’ (‘All these things you now regret. /— If only time could be re-set, / put back to front and thus refashioned / as if this stuff had never happened.’).
Henning Wagenbreth turns the world upside down - or rather: he inverts the space-time continuum, reverses the passage of time, and illustrates the resultant spooling-back of a wild variety of events by means of an avantgarde-ish succession of comic-style scenarios: let’s see what happens if we re-run our lives backwards! – ‘Und schon ist es kurz vor sieben, / eben war es noch um acht. / Worum du mich grad gebeten, / hab’ ich dir bereits gebracht. (‘And in a flash it’s not quite seven, / though moments earlier the clock said eight, / while the breakfast roll you’re still demanding / is already sitting on your plate.’). So what happens in Backwards-Land in the course of a car accident, a storm-driven shipwreck, a savage war, a football match, a lottery win, factory work, lunch, a crime? A smashed-up ship and its drowned crew arise from the waves, and all is well again: they sail back into the past to their homes and parents, their wives and children; in the inferno of a city devastated by war we see the citizenry gradually coming back to life, the soldiery returning to their barracks: ‘Dort lernt man das Exerzieren,/ möglichst wenig nachzudenken, / ohne zögern zu parieren, / stolz die Landesfahne schwenken.’ (‘They learn to be a fighting man, / to think as little as they can, / to stab and kill without hesitation / and proudly brandish the flag of their nation.).
One particular quatrain clearly demonstrates that Henning Wagenbreth sees his magnificently mad journey through Backwards-Land as potentially affording us flashes of insight into our own individual lives and into life in general: ‘Du hast vieles neu sortiert, / das Vergang'ne korrigiert. / Du hast über dich gelacht, / Fehler wieder gut gemacht.’ (‘So much you’ve rearranged at last, / you’ve sorted out the distant past. / You’ve had a laugh at your own expense, / and for numerous errors made amends.’ It can equally well happen, however, that we absent-mindedly press the Forward button on our projector once again and allow the day to resume its course at 24 frames per secondas usual – until the next time the thought occurs to us that ‘Odnu yldalg  dluow ew taht efil ni enod ev‘ew sgniht wef a etiuq era ereht’.

In younger days did you ever run over a rabbit? Or did you study a subject at university that didn’t interest you? A second chance is now available! In Rückwärtsland (‘Backwards-Land’) Henning Wagenbreth reverses time, so that you can do such things all over again - and do them better.
Using both panel-sequences and whole-page illustrations alongside pointed rhymes, the Berlin illustrator Henning Wagenbreth tries out the idea at micro- and macro-level alike. He reverses the spelling of words (‘sdrow’) and cheerfully upends the logic of everyday life: the newspapers tell you what’s going to happen tomorrow - which cars will collide with which, where a gas tank is going to explode.
As in a film run backwards, half-dead bodies leap gaily to their feet, stone-cold ashes burst into flames, the great guns of war shoot everything back together again. And the chimneys, grey and looming, draw their exhalations back in and end up making the skies blue once more.
Dramatically bustling characters and skilfully drawn illustrations, bursting with energy and gloriously colourful, form a charming counterpoint to verses that are reminiscent of Wilhelm Busch in their rhythm and wit.