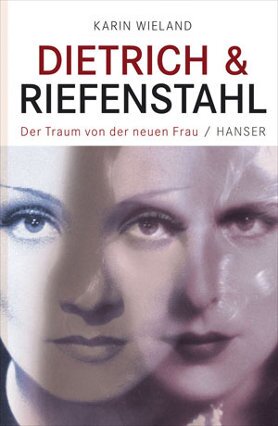 ​When Leni Riefenstahl’s memoirs were published in 1987, Marlene Dietrich made no bones about her antipathy to them, and she declared that everything in these memoirs was a stinking pack of lies by a once-fervent devotee of Hitler now claiming never to have heard Hitler’s name before 1932 and not to have known about all the crimes that were taking place.  If we look back at the lives of the two women, we find it hard to conceive of a greater contrast than the one between the Hollywood star Dietrich, who left Germany back in 1930, launched a career that made her world-famous, and was active with the US army in the fight against Nazi Germany, and the dancer, actress, and filmmaker Riefenstahl, who after successful performances in nature and mountain films rose to become the most prominent woman artist of the “Third Reich” and a key member of Hitler’s inner circle.

And yet there were numerous lines of convergence and points of contact between the two women, as Karin Wieland demonstrates in her voluminous, meticulously researched, and gripping dual biography.  Born at the beginning of the twentieth century in the edgy city of Berlin and raised in the years of the Great War, both had to dig in their heels in opposition to their parents’ visions of life and morality.  They focused their efforts on escaping their stultifying surroundings and moving on to make something of themselves.

In the chaos of the postwar era and the turbulence of the 1920s, which were marked by inflation and unemployment, they discovered art as an outlet and means of escape.  Dance, theater, and film were the prime stages for young women to exploit their beauty and charisma to become major (or at least minor) stars. In most cases, willpower, discipline, and the capacity for self-promotion proved to be more important than talent and ability.  Another key to these women’s success was their ability to exploit their erotic allure; both Dietrich and Riefenstahl would profit from their tight network of lovers and admirers throughout their lives. The saying: “A woman is what she makes of herself” applied to these two women in equal measure.

While Marie Magdalene Dietrich, who adopted the stage name Marlene at the age of eleven, found her way onto a variety of stage and minor movie roles in Berlin, and was discovered by Josef von Sternberg in 1929 for the part of Lola in “The Blue Angel”, Leni Riefenstahl had to abandon her career as an  Ausdruckstänzerin (expressive dancer) after an injury, but would then become famous for movies that included “The Holy Mountain” (1926) and “The White Hell of Piz Palü” (1929), in which she stood out more for her bravado than for her acting talent.  Art and pain went hand in hand for Riefenstahl right from the start, and in her view, beauty was an outgrowth of physical exertion. For Karin Wieland, Riefenstahl’s ascendance as an artist who contrasted the purity of the mountains with the squalor of the cities and cast herself as a cross between a priestess and a femme fatale formed a part of the “history of the Weimar Republic still needing to be told.”
The reader of “Dietrich & Riefenstahl: The Dream of the New Woman” is presented with a great deal of new information about the lives of artists in Berlin in the 1920s, about anarchy and libertine lifestyles and about the favorite bars and hangouts of the stars and the meeting places of everyone who belonged and wished to belong.  This era came to an end with the so-called seizure of power by the Nazis.  Marlene Dietrich, who made a name for herself in Hollywood with the help of von Sternberg—who had discovered her and become her lover—and went on to make films there with Ernst Lubitsch, Billy Wilder, and G. W. Pabst, refused all offers to return to Germany.  For her, it was a matter of decency not to have anything to do with Hitler, who greatly admired her, and Goebbels, who tried to win her back.

By contrast, Wieland tells us, the best period of Leni Riefenstahl’s life got underway in 1933.  Hitler, whom she had tried to get to know earlier on, was captivated by her, and made her his favorite artist.  Since she was now directing movies in addition to acting, she was entrusted with documenting the Nuremberg Rallies and the Olympic Games of 1936, which she filmed to spectacular effect.  “With the Olympia film,” Karin Wieland argues, “Leni Riefenstahl accomplished the feat of making an eminently political film that is regarded even today as one of the best sports films of all time, despite all odds.”

The war had a profound impact on the loves of these two very different women.  Marlene Dietrich made herself available to the American army, sang to tens of thousands of soldiers in North Africa and Europe, and advanced with the troops to Germany, while Leni Riefenstahl took part in the German victory parade in Warsaw in 1939, but devoted her primary efforts to the endless project “Tiefland” (Lowlands) under the patronage of Reich Film Minister Goebbels.  She would spend ten years of her life working on this film, which cost exorbitant sums of money.

Wieland’s book also provides in-depth discussions of the second halves of these monumental women’s lives, which are reconstructed and creatively interwoven here in light of a careful evaluation of all extant documents and records.  In contrast to the Marlene Dietrich Collection, which is easily accessible to the public and comprises more than 300,000 pages and an array of objects including clothing, cigarette cases, and make-up kits, scarcely anything is available to researchers on Leni Riefenstahl, and for good reason, it would seem.  She did not regard the end of the Nazi rule as a new beginning, but as a temporary disruption of her career.  She felt that she had been misunderstood and wrongfully accused, and she would deny any involvement in the crimes of her former patrons to the end of her life.
In lieu of film work, Riefenstahl was able to embark on new careers by taking pictures of obscure African tribes and working as an underwater photographer. She photographed Mick Jagger, was invited to festivals, and was embraced by the artsy pop culture scene. She was the darling of German cultural reporting each time she reached a milestone birthday, and was more than one hundred years old when she died in 2003.  Riefenstahl was the only artist associated with the Nazis who did not forfeit any of her fame in the postwar years.

Marlene Dietrich also had to find her footing in the world of the Cold War.  She was able to make a few more major movies, but she then focused on her career as a singer, in which it nothing mattered more than to uphold her immutable image: “She was conceived as ageless here.  Her performance is the wistful reminiscence of a woman who seems to be blessed with eternal youth.  Marlene Dietrich remained tied to the cinema, but now she was directing the film of her life.”  She became a machine that had to work perfectly in order to survive the endless tours and to bring in an urgently needed income.  This life was unendurable without alcohol and pills.  In 1992, she died lonely and isolated in her apartment in Paris, but her face had become an emblem of the twentieth century.

Karin Wieland’s multifaceted portrait tells the story not only of two icons of modern art, but also of a century in which the “dream of the new woman” was the reverie of many women.  And the diametrically opposed paths of these very different twin sisters, Dietrich and Riefenstahl, proved to be interlinked forms of living out this dream.  The author leaves no doubt as to where her sympathies lie