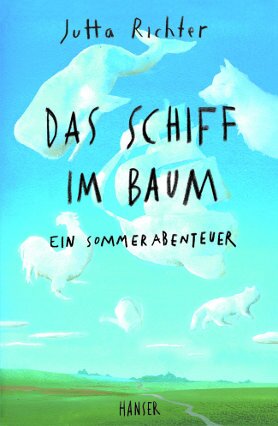 ​This story has the feel of a Friesian summer’s day: blue, cloud-flecked skies above a landscape of flat green pastureland, with just a few dark shadows when a fat, fleecy cloud momentarily obscures the sun. Everything is full of light and air and gentle breezes as the clouds journey on across the azure firmament towards an infinitely distant horizon, constantly shifting shape as if wishing to delight their earthbound beholders with a game of ‘Now you see me, now you don’t’.

Jutta Richter needs just 120-odd pages to tell her story “Das Schiff im Baum” [The ship in a tree] (for which her illustrator, Aljoscha Blau, has created a suitably cloud-themed cover tyogether with fly-leaf sketch maps) — but even so she manages in eighteen short chapters to unfold the entire world of a summer adventure experienced by two big-town children in a place where they imagine that foxes and hares walk straight past each without saying hello if perchance they happen to meet.

11-year-old Katharina, who recounts the story, and her 9-year-old brother Ole are not at all pleased when their single mother packs them off during the summer holidays to ancient relatives in a miserable little hole called Betenbüttel so that she can go off to a health spa. Okay, so their mother used to enjoy spending her holidays with Auntie Polly and Uncle Fiete when she was a child — but that was centuries ago, for goodness’ sake! The expectations of today’s kids are vastly different from those applying back then in the Dark Ages — different and, above all, digital. And on top of all that, Katharina and Ole have never even met the two old folk.
The children set off on their journey to Nowhere with great reluctance — and their worst fears seem at first to be borne out: Auntie Polly and Uncle Fiete really are very old and wrinkly, the furnishings in their little house in the countryside are basic in the extreme, and there isn’t even a TV. On top of all that, their maverick uncle often behaves in funny ways. But then everything changes once he starts to tell stories and spins his seaman’s yarns, bringing to life Captain Ahab, with whom he claims to have sailed the high seas in days of old. A strange kind of metamorphosis takes place thanks to the power of imagination, which proves capable of bringing together even such different worlds as those of the very young and the very old.

Although Jutta Richter brings to life a world that has now all but disappeared from the experience of most children, this vanishing universe radiates immense charm. This shows itself particularly in the tension between the plain and simple living conditions of the household and the perforce illusory realms of swashbuckling adventure.
The links that connect these two worlds of reality and imagination are the pervasive atmosphere of safety and security, the actual stories recounted by the old man, and — not least — various creatures and objects that serve to feed the children’s imagination: a freedom-loving tom cat, an elderly dog, a crowing cockerel, a shed festooned with spiders’ webs, a gnarled apple tree in which a sailing ship can readily lie at anchor, a pond surrounded by reeds that can readily be converted into a raging sea. Jutta Richter handles this interplay with true mastery, and in so doing she delights not only her young readers, but also those older ones who already grieve for a world they thought had gone for ever.