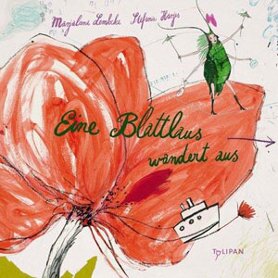 ​A resonant name, and an exuberant personality to match: the greenfly Camilla Rosa Kapriziosa wants more space for her individual development. She longs for a big green leaf on which to pursue her own thoughts. But the greenfly colony is a seething mass devoted exclusively to the process of gobbling and digesting food. A brainless horde that gets on Camilla Rosa’s nerves and is also, of course, wholly incapable of showing the slightest sympathy for her need for contemplation. Indeed they make fun of her. ‘Push off if you don’t like our company!’ the other greenflies tell her. ‘Go to America!’ Camilla Rosa’s sort doesn’t need telling such things twice — after all, she’s the creature of Marjaleena Lembcke and Stefanie Harjes!

Marjaleena Lembcke, the writer of the story in the picture book “Eine Blattlaus wandert aus” [A greenfly decides to emigrate] usually creates clever, laconic girls who are a touch sad, but unwaveringly strong-willed. Stefanie Harjes, on the other hand, prefers the shrill, determined, go-getting sort of girl who dares to do what others scarcely dare to even think about, and who seeks to achieve her goal by the directest possible route. In her 2009 picture book “Wenn ich das 7. Geißlein wär’” [If I were the seventh goat] she presented us with one of the cleverest and cheekiest examples that the genre has seen in recent years.

No wonder, then, that the greenfly dreamt up by these two ladies does not waste any time. First she reserves herself a place on the bouquet of roses that an opera singer is taking with her to America. On arrival she takes the opportunity at the customs barrier to hop onto the carnation adorning an elegant gentleman’s button hole. She moves on to a pair of lovers, is unwittingly thrown out with the rubbish, and lives amongst rats. Camilla Rosa experiences all levels of society from highly sophisticated to extremely vile. Things look up for the greenfly when she finds herself surveying a field full of poppies in California. A girl picks the very poppy she is on and gives it to her mother, who is getting ready to go on a trip to Europe. Camilla thus ends up right back where she started from, and the other greenflies are wide-eyed with wonder on finding beautiful Camilla Rosa living amongst them once again.

While Marjaleena Lembcke recounts the greenfly’s odyssey in clear, crisp sentences, always remaining on the same linguistic wavelength as her young readers, the illustrations of Stefanie Harjes encourage us to linger. Open the book, and even the endpapers entice us into dreamland. They present us with flowers, a map, arrows, postage stamps, a lighthouse, little sketches and photographs, so that we are at once drawn to this world of signs and images. Stefanie Harjes operates with collages, and demonstrates to great effect the process whereby her multifarious images are put together. You feel tempted to touch the pictures, because the flowers, animals and discrete patterns all give the impression of being cutouts that have been so haphazardly stuck down that you could trace their edges with your fingers.

The artist conveys the story here with all the means at her disposal. In the process the art of illustration is brought within the children’s own ambit of experience, and this makes one think that children could tell their own stories in exactly the same sort of way. This conduces to a particular affinity to the medium of books. In contrast to the ever changing images of the digital realm, these pictures encourage us to look at them really carefully. They cry out to be explored – not only because we would like to work out how they are put together, but also because their seemingly disparate details turn out to be subtly linked to each other. The component elements of these pictures are interconnected. There is no run-of-the-mill linear progression in this narrative: many different things are happening at the same time.

Each double-page spread works like a verse of poetry. Camilla Rosa only has to muse with her fellow greenflies about what turn her life should take, and hey presto! – we instantly see the ship on which she will travel, and the skyscrapers of New York already cast their shadow. Such pictures invite us to explore them, and each one makes us want to go on and discover the next. We want to know what becomes of Camilla Rosa and her eccentric ideas. And Stefanie Harjes doesn’t depict her as an ugly little creature like all the other greenflies, endowing her instead with an elegant figure, slender arms and a dashing hairstyle. This is one classy greenfly. “Eine Blattlaus wandert aus” is thus one of those picture books that exemplify the present-day evolution of the genre, and shows us not only how inspiring it can be to experiment with motifs and pictorial language, but also that children derive enormous fun from precisely this process.