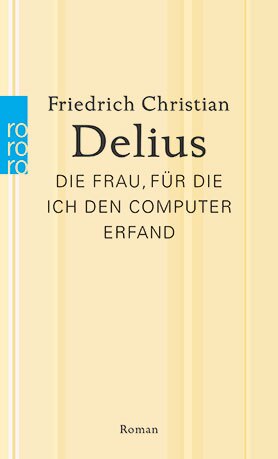 One hot July day in 1994 Konrad Zuse meets a journalist for a very special interview on the terrace of a remote country inn in the Rhön Mountains. As per agreement, the conversation will last one night long. In these few hours Zuse, the 84-year-old German pioneer of computer technology, plans to speak openly as never before about his long and turbulent life – including his special relationship to Ada Lovelace, the woman for whom he invented the computer. Thus far the framework of Friedrich Christian Delius’s new novel; after a brief introduction, the body of the novel is taken up by Konrad Zuse’s narrative. In a casual, idiosyncratic tone Konrad Zuse tells how he built the first functional computer in his apartment in Berlin-Kreuzberg in the 1930s and 40s, how the Nazi regime affected his life as an inventor and how he ultimately managed to save his computer from the Allied bombings. In ingenious and unconventional fashion,The Woman for Whom I Invented the Computer uses the figure of Konrad Zuse to illustrate the intersection between personal and global history.

The historical Konrad Zuse (1910–1995) constructed the Z3 (A3 in the novel), the first computer based on the binary system, during World War II in his private apartment in Berlin. Though far removed from the scientific establishment, from 1936 onward he extensively documented his inventions and patent designs. His writings transcend the immediate technical issues to offer early reflections on the possible social functions that could be assumed by his invention, the computer. The novel The Woman for Whom I Invented the Computer picks up on this discourse and expands on it using the devices of fiction.

On this evening he is supposed to be receiving an honorary degree from the University of Braunschweig. But the title – his 14th – leaves him indifferent, he has heard too many encomia in his life and held too many acceptance speeches. But on this July day in 1994 he does want to talk: “Not a tailcoat-speech, not a necktie-speech, more in a lab coat, understand?” To talk “in a lab coat” means to flout rules and etiquette, call a spade a spade and “finally tell everything in a completely different way [...], tell it [...] the way it really happened and how I went around with that fist in my chest and how it was with Ada, that’s exactly my way of sticking out my tongue at the rest of the world.” For the 84-year-old Konrad Zuse the conversation is both an act of liberation and an act of leave-taking. There will always be countless problems to solve in the field of digital technology, he argues, especially in artificial intelligence, where the intricate web of human thought must be translated into binary codes. “Unanswered questions aplenty... I don’t have to grapple with them anymore! What a great feeling! What a relief! Sixty years of linear, logical thought is enough! I can just say what comes into my head.”

It is time for him to take a look backwards. Zuse tells how he started work at the Henschel aircraft works after studying engineering in Berlin. But even before that he had toyed with the idea of constructing a computing machine that could do the difficult and repetitive calculations for him. An amateur inventor who had already developed things such as an automatic photo lab and a vending machine that gave change, Zuse began work on the A1, a digital calculating machine that served as a precursor to the first functional computer, the A3. In 1938, when the A1 was completed, no one in Germany suspected that these machines would one day change the world. Germany was internationally isolated under the Nazis, cutting off Zuse from the great advances in computer technology that were taking place at that time in the USA. In 1939 Zuse was drafted, but soon given a deferment, freeing him to work on his inventions.

Regarding his role in the Nazi regime he admits: “I have to say I had absolutely no time to be an anti-Nazi. Of course someone like me was fascinated by the technical opportunities offered by the new regime [...]. I was a hanger-on and I admit it.” In contrast to his colleague and contemporary Wernher von Braun, however, Konrad Zuse’s achievements went unappreciated by the Nazis. After the A3 was destroyed in an air raid in 1945, Konrad Zuse fled from Berlin to a small mountain village in Southern Germany, taking along the more sophisticated A4 to hide it from the Allies. He succeeded, but even after World War II his work remained unrecognized at first. Not until 1949, when the A4 was presented at the Institute of Technology in Zurich, did the world take notice of the inventor. But by that time his US colleagues had already made their inventions public.

Zuse is clearly disappointed that it took so long for his achievements to find the recognition they deserved; he harps on the subject over and over again. In any case, his account is anything but strictly chronological. Though the sequence of events is largely maintained, reflections on such themes as society, love and technology make up much of the narrative. Zuse’s story is based on an interview, but because the journalist’s questions are omitted, indicated only by points of ellipsis, it reads like a monologue. The result is an open text marked by the fresh, lively rhythm of spoken language. This idiosyncratic tone is characteristic of the novel, reflecting Zuse’s desire to speak “in a lab coat”.

Thanks to the skillful use of various leitmotifs that recur throughout the protagonist’s story and life, the narrative never loses its focus. One of these leitmotifs is the law of binary code on which every computer is based and which takes different forms: either the electricity is flowing, or it isn’t. The current is positive, or it is negative. Goethe provides another leitmotif for the literary-minded narrator: the Faustian element, standing for the forward-striving character of his life and for his delight in invention. For Zuse it is closely tied to the principle of love, as described in Goethe’sFaust: “The eternal feminine draws us onward”. Ultimately, this refers to Ada Lovelace, a British woman who died in 1852; she is regarded as the first computer programmer, and the computer language “Ada” is named after her. Her intelligence and inventive talent woke Zuse’s passion and kept it alive over the decades.

The Woman for Whom I Invented the Computermasterfully fuses fiction and documentation. On the one hand, the novel illustrates how history is reflected in the person of Konrad Zuse. On the other hand, it is a portrait of a man whose invention, in turn, fundamentally altered society. Thanks to the subjectivity of the perspective, the book never threatens to turn into an essay on cultural history; rather, it is the relaxed and entertaining story of a remarkable man’s life.