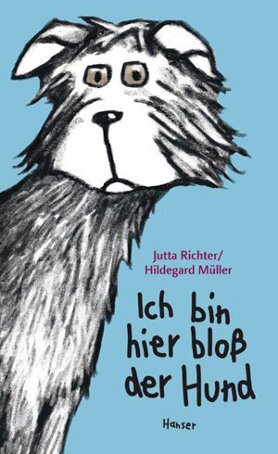 ​Even the most loving cat father will have to revise his worldview after reading Jutta Richter's "I'm just the dog around here." Dogs are not the exact opposite of our freedom-loving, outdoor-indoor-house cat. They are not servile, opportunistic, mercenary, or a little stupid. At least not totally. Dogs are not "the opposite of"; they are simply different from the others. And above all: they have an amazing faculty for reflection and a highly developed sense of justice. And sometimes they even have the makings of a (very humble) hero of the day. Okay, maybe you can occasionally find a couple of dumbos within the species– but humans are no different in this regard. Nonetheless, what the fluffy black shepherd dog named Anton confides to us, will surely leave young and older readers alike with a feeling of respect and compassion.

The dog, previously called Brendon, did his duty in the Hungarian Puszta where he kept an eye on the steppe cattle, wooly pigs and Wallachia sheep and protected them from wild cats and jackals. Old Sheepdog lineage. Brendon had his share of a few tragic events, which won’t be mentioned here, and ended up in a small German family where he was called Anton. Father. Mother. Toddler. And a cat. Mizzi (what kind of name is that?).

Jutta Richter has accomplished nothing less or more than to give Anton a long overdue voice. His story is told in ten short chapters, congenially illustrated in black and white by Hildegard Müller, that detail his experiences with the family in autumn and winter, with father Friedbert (struggling to live up to the role of leader of the pack), with mother Emily (sweet, but sometimes hysterical), with the little daughter (his favorite creature, whom he calls "the little one"), and of course with Mizzi, who shamelessly vies for his favorite places to hang out. And then there's the memory of Uncle Ferencz, the wise, old sheep dog from the early days in Puszta.

Jutta Richter's art consists primarily in making herself an invisible narrator. If we didn’t know better, we’d not only think Anton was telling us his own story while sitting with us at the kitchen table, we wouldn’t doubt for a second the veracity of his words. The text is composed in an unusually rhythmic fashion and reads like a long prose poem - a poetic monologue recited by a very clever dog that has seen both joy and suffering, as he puts it: "All in all, I’ve struck lucky.”