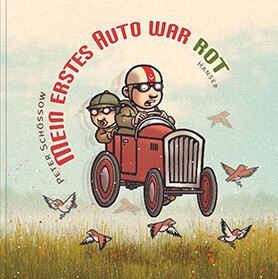 The first thing you see is galloping rust in that rich, warm shade that speaks in reassuring terms of the passing of time. Yes, it is a journey through time that Peter Schössow recounts in his picture book Mein erstes Auto war rot [My first car was red]. His narrator back in those days was a boy — a boy whose grandfather gave him a small children’s car as a present. It was old and rusty, and on top of that it had a broken axle. But it’s the very fact that the car is in such a sorry state that makes the task of renovating it so interesting. Lots of drilling, screwing and filing is called for. In the process, what started out as merely a present donated by someone else becomes truly the boy’s own possession. This metamorphosis doesn’t happen just like that, it has to be achieved through hard work — and the boy’s sense of triumph is all the greater as a result, and there comes a point where he can proudly declare “MY CAR!”

We don’t in fact ever see the grandfather during the story — but we do see the boy’s younger brother, who still sports a dummy and follows the activities of his older brother with wonderment. The bigger boy does indeed accomplish heroic deeds in the eyes of the younger one. Eyes are indeed the key factor in this story of Schössow’s: in every single picture we see the eyes of his young hero, sometimes startled, sometimes curious, anxious or contented. Looking requires a certain distance, and within this span all life occurs. Schössow accordingly uses the entire width of the double-page spreads to conjure connections, in the first instance between the two brothers. Then the car is finally ready to go, the younger boy wants to join in, so it becomes an outing for two. We now look on as the pair make their way through the countryside.

This is all very cleverly done, for Schössow superimposes his brief sentences on top of his illustrations like a separate layer, thus producing the particular nexus between text and image that characterises the book. Strictly speaking, two distinct media are being laid one on top of one another here, one consisting of linguistic signs and the other of pictorial motifs — for pictures, too, are texts replete with meaning. Both need to be decoded, and Mein erstes Auto war rot is accordingly particularly well suited for children who are just beginning to read. This way of putting a story together is typical of the style of Peter Schössow, who uses a computer to produce his illustrations. In creating his images he aims at surface, not depth. This is clear in the landscapes that form the background to the odyssey of his two heroes. The spatial evolution of a story requires a certain depth, and the problem of its absence here is solved by Schössow’s device of having his characters appear several times within the same picture. As the boys drive along, we see them to the right and to the left and on the bend in between — all within the same picture. Each double-page image is thus an ingenious composition. The clapped-out car soon shows itself to be a veritable missile. The boys first go clattering through the garden shed of the girls next door, then they are chased by a swarm of wasps. They only just avoid going over the edge of a cliff. Their adventure takes them through a tunnel full of bats, and straight intio the mud bath of a family of pigs. Their car goes faster and faster, and as in real life they suddenly discover that it doesn’t have any brakes; the pair of them go careering into a wood, and inevitably it all ends in a crash.

But it’s been exciting, that’s for sure, and it’s a perfect tale to hear just before going to sleep: a richly worked adventure in which the world of cars and driving is explored with tremendous verve. There’s much to see, for the narrative trajectory of Schössow’s two children is attended around its fringes by numerous other figures who never allow the reader to gain the impression that the pair might have to live through their adventure up hill and down dale all on their own. The birds in the trees or their cuddly toys at home constantly have their eye on them. This lends the images fulness and warmth, and since we don’t have to harbour any worries about our two dashing young protagonists, we can enjoy their adventure all the more, quite free of anxiety. They will come through it alright, as revealed not least by the stoic humour that permeates Schössow’s illustrations. We see it in the eyes and body language of his characters, all of whom possess presence and self-confidence, an awareness that they are on the right track and that the big wide world can offer as many challenges as it likes: we’ll overcome them all and have fun in the process, even if it costs us the odd bump or grazed knee.

It’s good to grow up with books like this, and the splendid optimism reflected in the boys’ unshakeable confidence could turn this rust-bucket adventure story into a classic amongst picture books.