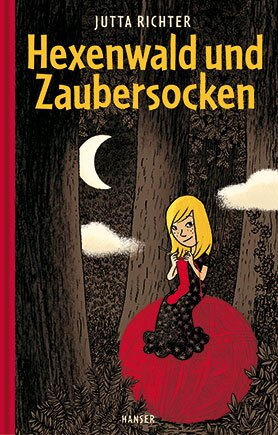 Karlotta Ingwer Loretta, or Karla for short, has everything a modern witch could wish for. She is young, pretty and clever; has her own house in the woods; knits enchanted red socks; and, when evening falls, sings her nocturnal incantation. Despite all this, though, there is one cloud on her horizon: in the woods, there are rarely any passers-by with whom she could share stories. And so Karla often feels rather lonely.

Robert the coalman feels lonely, too. He lives in the big town, grafting for Coal-merchant Klawuttke. Robert is so ashamed of his black hands that he has never dared to approach a woman. And yet he is everything that a woman might wish for: he is young and blond with a friendly face; he is dependable; and takes great delight in hearing stories. In short: he is the perfect man for Karla.

But how could they ever meet, when the witch’s crooked house is buried deep in the woods, far away from the big town and its coal-cellars? Renowned children’s author and German Youth Literature Prize winner Jutta Richter solves this problem in the most warm-hearted and amusing manner and, as she does so, she tells a subtle story of love and happiness.

For - luckily for Karla and Robert - there is also old Hermine Schlott. She is the true witch of this story, as the reader only gradually comes to realise. Her old house, with all its nooks and crannies, is stuffed from attic to cellar with the strangest things. Among them is a pair of those warm red socks that Karla is in the habit of knitting on long winter evenings. When Robert is delivering coal to Hermine Schlott again, she tells him the story of a young, pretty and clever witch who lives all alone, far away in a little crooked house in the woods. As for reality: “There’s what you know and what you believe”, as Hermine Schlott says meaningfully at the end of her story before giving Robert the red socks.

The first step has been taken - and the very next morning, Robert sets off in search of Karla. He finally finds his way to her little house in the woods - or was it the red socks that showed him the way? Nobody knows for sure - and nobody knows either if the love-spell that old Hermine Schlott sends from afar to loosen tongues is really necessary. For Karla and Robert become so close over blackberry wine, bread and butter and story-telling that a quite different kind of magic starts to take effect; one that will ultimately save Karla from her hermit-like existence and will give Robert the courage to hand in his notice to Coal-merchant Klawuttke and to move into Karla’s house in the woods.

To tell this story about people finding love, Jutta Richter mostly uses brief, concise sentences and straightforward language. This enables even younger children to follow the plot, and emerging readers will also be able to read the story for themselves. The author chooses not to use many words - but the words that she does use are chosen with infinite care. Thus the reader constantly encounters fresh analogies and felicitous linguistic images, such as, for example, when Robert dreams of the beautiful witch Karla with green eyes “like December stars”, lips “as red as strawberry jam”, and her clear skin that smells as lovely as lavender soap.

And yet the story never tips over into sentimentality, thanks to the lively dialogue and the light, humorous narrative tone which often bears the hint of a knowing wink. When Robert finally finds his beloved, she turns out not to be some ethereal fairy-tale-like creature. Instead, she is a practical young woman who, faced with a man who is completely exhausted after wandering around the woods, makes him some bread and butter and opens a bottle of blackberry wine.

Karla has sorted out all the practical problems of looking after herself in the woods in the most independent and ingenious manner. However, it is also clear that she feels very lonely. Just before Robert appears, she has been sitting sadly in her armchair, fearing the loneliness of the oncoming winter.

The author has created a superb image for this dark side of human existence; the fear, loneliness and sadness. The image is that of the “poor creature”. “The poor thing was spongy, misty grey and damp. It had big, wet eyes and a cold, smooth tongue. On the darkest days of winter, it pushed its way under the door. It would lie down in the witch’s chair and it crept up to bed with her at night. The poor creature was utterly made of sadness. And when it came, Karla felt chilled to the bone, and every trace of joy vanished.”

Humorously depicted by the illustrator, Jörg Mühe, the “poor creature” initially appears as a bald creature, rather like a cuddly toy. Later, however, it shows its true face and, as a monster with bared teeth, almost tears Robert and Karla apart. However the two of them, who have both been yearning for a heart-warming exchange with another human being, finally realise that the “poor creature” doesn’t stand a chance against two story-tellers like them. Thus it transpires that this tale about love is equally about the power of telling and listening to stories.

Old Hermine Schlott has known this for a long while. After all, page 55 of her book of spells describes: “ ... true love, as it lasts and makes people happy for a long time: two people meet and discover that they like the same things. They will sit together and see into one another’s hearts, for they speak the same language. They will never tire of one another as they will tell one another stories.”