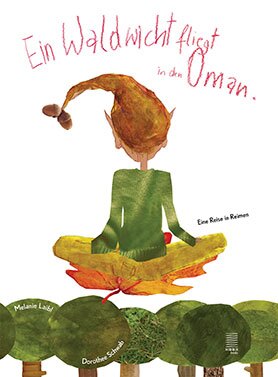 “Forest sprites are very small,
But their dreams are grand –
Eating berries, riding squirrels,
High above the land.”


A journey in rhyme – that is the subtitle of the picture book A Forest Sprite Flies to Oman. The collaboration between author Melanie Laibl and illustrator Dorothee Schwab has created an entertaining book for children, rightly honoured by the Design Austria professional designers’ association with the award of the 2008 Romulus Candea Prize. The innovative illustrations of this book, as well as the original rhymes, make it easy for children to immerse themselves in the forest sprite’s world: a world of raspberry-bearing trees, rustling leaves, and the dream of circumnavigating the globe.

It all begins with the forest sprites who inhabit the crowns of the trees, where they lead a merry life apparently unnoticed by human beings. But one of these sprites is different from the others. Although he, too, enjoys life among the leaves, it isn’t enough for him, because his great dream is to fly all around the earth some day. “But how, he wonders, sadly sighing / When I have no wings for flying?” However, the forest sprite cannot get his wish out of his mind, and in autumn, when leaves fall and the wind blows them over the countryside below, he seizes his chance and commandeers a rustling leaf as his aircraft.

Buoyed up by his courage and protected by his lucky acorn hat, the forest sprite sets out on his flight around the world. On a visit to Santa’s elves in the Arctic he almost freezes; in Zanzibar the desert wind blows him on; and in India he discovers that even sacred cows can’t usually say anything but “Moo!” In China he tries eating berries with chopsticks, and in Brazil he dances so well that the Brazilians would like to keep him there. But he can’t stay – there’s still too much in the world for him to see. The forest sprite goes surfboarding in New Zealand, and doesn’t even fear the dense magic carpet traffic in Oman, where a friendly bottle genie welcomes him, remarking, “Looks like you come from far away!”

The genie is right. After all his adventures, the forest sprite thinks he deserves a rest. But then he suddenly thinks of his friends in the forest clearing, and decides to go home. Back again after his long flight, he is warmly welcomed in his own forest. After all, he has now practically become “an international big star”. A shout resounds above the treetops – “The sprite’s in sight!” – and the dreamer’s journey round the world ends where it began.

A Forest Sprite Flies to Oman is an impressive journey of the imagination, presenting the reader with the magic of unknown lands as seen from the forest sprite’s point of view. It is a tale of the courage it takes to embark on something really special, even if no one else understands why you want to do it, and it shows why it is worth holding on to your dreams. For on every page of this book, the fascination of adventures in faraway lands is brought to new life, and that fascination will surely casts its spell over adults as well as children. However, it is also a story about the happiness of coming home again after a long journey and sharing your experiences with your friends.

The pictorial design of the book is outstanding: its collage technique combines drawings and photographs, snippets taken from newspapers and handwritten words. And there is a surprise waiting on every page: a sandy beach made of cuttings from old newspapers, a wave that is also the photograph of a high-rise building, a wax crayon songbird. It is this successful mingling of all the elements employed that gives the book its unique character. In addition, the technique is skilfully adjusted to the content of the text. For just as the boundaries between fantasy and reality blur in the telling of the story, so we can puzzle over the graphic details: which picture is a photograph, which is a drawing? The whirling autumn leaves are both at once. And since the story shows everything from the little forest sprite’s viewpoint, small items suddenly appear very large and thus magical: the orchid in the rain forest is gigantic, but that very fact enables it to unfold its special beauty – and among the icebergs a snowman is hiding, perhaps to be seen only at second glance.

Two special extras in this picture book ought not to pass unmentioned. On the last page there is a song of welcome to the forest sprite; its text tells the whole journey again, and given a little knowledge of music the song is easily performed. The book also comes with an unusual map of the world showing all the places where the forest sprite stops off on his journey. The continents glow with strong colours: yellow for Africa, green for America, dark purple for South America, a strong red for Asia, and then there is the white continent of Antarctica, while Australia is shown in light green – a delightful poster for a child’s room.

With A Forest Sprite Flies to Oman, Laibl and Schwab have created an intelligent picture book full of variety, convincing in every way, and a work that will encourage both children and adults to be adventurous. For at the end, when asked what the point of his travels was, the forest sprite points out that just letting life pass by is “not as wise as it may seem,” and adds, “I’d rather chase my dream.”