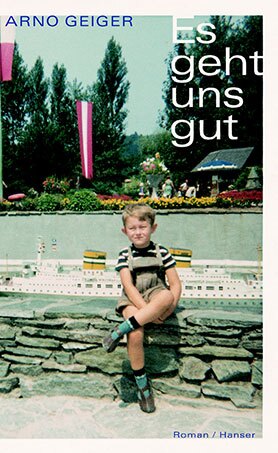 “What has become of them, all the dead people whose ranks increase daily?” This is the central question facing 36-year-old Philipp Erlach when he inherits the family villa in the upper-class Viennese suburb of Hietzing after his grandmother’s death and reluctantly sets about cleaning house and attic. In the process, the struggling young writer unwillingly becomes the (re)constructor of his own family history, confronted with the relics of seven decades and forced to decide what to keep and what to sort out. “Wherever you look, the discarded things congeal into raw material, a material that mingles generations, thickened, shriveled, faded family history.”

Philipp’s clean-up operation (in more than one sense) provides the framework for flashbacks each covering one day and told from the perspective of a different family member. Starting in the spring of 2001, the author sinks boreholes that bring to light crucial moments from the past seventy years of history – both Austrian history and the history of the family headed by Philipp’s grandfather, former minister Dr. Richard Sterk. With this juxtaposition of epochs and perspectives, Geiger brings new life to the “family novel” genre that has recently enjoyed such popularity in Germany. He lets the past stand on equal footing alongside the present; rather than relating earlier episodes of family history retrospectively, he makes them as immediate to the reader as those set in the present day.

Geiger has an astounding knack for feeling his way into the idiom of the individual characters in their different moments in time, bringing a true diversity of perspectives to the family’s development and lending a characteristic face to each epoch, from the time of Austria’s annexation by Germany in 1938 to the end of the war in 1945, the years of the “economic miracle”, the emancipation movement of the 1970s, the waning Cold War years in the 1980s and the dawning 21st century. Each time the narrative focus is on a different character, each reflecting a specific quality of the historical moment. Now it is the long-suffering grandmother, the secret center of the family, both as an old woman and in her younger years; now it is the grandfather, a superficially dominant, inwardly weak patriarch; now it is Philipp’s mother Ingrid and her husband Peter as young parents, along with Philipp’s sister Sissi. From the starting point of 2001, snapshot-like close-ups of significant life phases form an associative yet largely chronological narrative from 1938 to the present.

Taken as a whole, they reveal a tragic family fate; as in Thomas Mann’s Buddenbrooks and many later works, family history is the history of decline. The middle generation dies prematurely; Philipp’s uncle Otto is killed as a fourteen-year-old conscript at the end of the war, while Phillipp’s mother Ingrid is drowned in a bathing accident in the Danube when he and his sister are small children. This leaves the increasingly frail grandparents and the grandchildren, who want as little as possible to do with their family and its past. “After all,” Philipp thinks at one point, “it’s not his fault that no one remembered to give him a taste for family before it was too late.”

No wonder Philipp fails to draw the obvious conclusions from the fact that for over ten years he has played second fiddle for his girlfriend Johanna (television weather announcer, married, one daughter), and probably always will. Johanna seems to have settled down comfortably in “one of Vienna’s best-run failed marriages” with Philipp on the substitutes’ bench. And Philipp, like all the members of his family, is oddly weak-willed when it comes to personal decisions. All of them have a tendency to go with the flow, waiting for the situation to change, for new and more auspicious constellations to emerge “from the waiting room of possibilities”. Philipp is so far gone that he spends most of his time sitting on the front steps of his grandparents’ house instead of getting a start on the long-overdue renovation. This scene serves as a leitmotiv, symbolizing his congenital passivity, his inability to face his family’s past and his own future.

At the same time, like all the members of his family Philipp also has a heightened awareness of the passing of time, the missed opportunities that inevitably project themselves into the present as disappointments for which he alone is to blame: “In reality, Philipp is a marginal figure on all the walls of his life, in reality everything he does consists of footnotes, and the text is missing.” But that is not entirely true; this novel achieves what Philipp is unable to write: it itself is the story that needs to be told, the story of an “averagely dysfunctional family” as the author characterized his own novel in an interview.

With his precise observations, Geiger reveals his characters’ sore points without skewering them. On the contrary, the reader comes to understand all the characters, each in his or her own way, captives within themselves and the norms of their time. This conditionality is also reflected in the brief documentary passages that recur throughout the 21 chapters, usually radio newsflashes on the historical events of the day and the state of the weather – reflecting the observation that talk about the weather often conceals the real issues, the big questions. All the members of the family are fooling themselves and the others; it becomes quite clear that there is a direct correlation between self-deception and family taboos.

Here the fragments come together to form a vital whole; We’re Doing Fine (a formulaic protestation which is naturally meant ironically) can be read both as a family and generational novel and as a portrait of society and its times. For all its wisdom, the language of this book is wonderfully light; despite its disillusioning message, the tone is often buoyant and serene, leavened by laconic wit. Its persuasiveness stems in part from the force of its language and images. Above all, however, what makes this book about an “averagely dysfunctional family” so worthwhile is Geiger’s sensitivity toward his characters and the great seriousness with which he treats every single one of them.