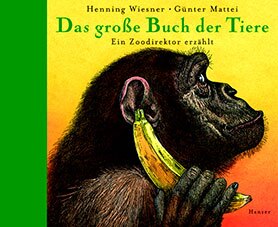 The Big Book of Animals is a difficult book to categorize or describe. Its slipperiness is due primarily to its format and design. This is one Big Book (both literally and metaphorically) whose numerous plates and illustrations aren't intended for children but for anyone with an interest in animals and zoos. In a series of chapters the book examines diverse aspects of animal life, culminating in an exploration of what is (at least from our perspective) the most intriguing species of all: mankind. What is it that separates us from our closest relatives, the great apes?

The tour of the animal kingdom unfolds in seven chapters, starting with the familiar: zoos. Henning Wiesner, director of Hellabrun Zoo in Munich, reveals how zoos aren't merely a way of bringing city kids into contact with animals but a means of actively combating extinction, protecting animals and conserving wildlife. Examples include the role of zoos in reintroducing the mhorr gazelle to its natural stamping grounds in Morocco and Tunisia and the attempts to breed back lost species such as the aurochs and the tarpan. Of course, no one can resurrect a species from extinction but at least we might glimpse something of how our present species may have looked in their primal form.

The next few chapters look at three fascinating zoological phenomena that are bound to make an impression, not least on younger readers. The first examines 'amazing animal achievements', describing how birds fly, how fish swim, how penguins and polar bears regulate their temperature and how a giraffe's blood is pumped up and down its incredible neck.

This is Günter Mattei's second collaborative project with Henning Wiesner, and his pictures play an integral role in the zoological descriptions, with each theme elucidated in a helpful combination of images and words. Wiesner's descriptions find their ideal compliment in Mattei's beautifully old-fashioned drawings, whether in the form of schematic representations, detailed cross-sections, anatomical diagrams or unstylized pictures of animals in their natural habitat.

The next chapter deals with animal behaviour – social rituals of pack animals, hunting methods and territoriality. The focus is largely on fearsome species such as the lion or the wolf, but harmless creatures like the red deer also feature. The 'art of the survival' is at the heart of the fourth chapter, which looks at how different species adapt to their surroundings and establish ecological niches in even the most unpromising conditions. The author illustrates his point by describing how three similar species of lemur co-exist in Madagascar by colonizing three different layers or 'storeys' of the jungle, thus deflecting struggles for safe resting places or food.

Wiesner, though, doesn't merely describe the animal world as we know it today. Two chapters are devoted to natural history and evolution and examine how our present-day animals evolved from long-lost species. Other species failed to evolve any further and became stuck in an evolutionary rut. Fans of the woolly mammoth and other prehistoric animals will find plenty to entertain themselves here. Those with an interest in pets aren't neglected, though, for the next section deals with the history of domestication. Wiesner describes in detail how domestic sheep, donkeys, goats and horses were bred into existence, showing how man and beast share a long and sometimes complex history.

In a fitting thematic culmination to the book, the final chapter examines what distinguishes us from our closest biological relatives. Is it our upright gait, the finely tuned mechanics of our hands, the existence of a linguistic centre in our brains? According to recent findings, the bonobo and the chimpanzee possess startling cognitive abilities. 'Kanzi', a famous male bonobo, is capable of expressing himself on a computer, using two hundred and fifty lexigrams, and is able to follow simple steps of logic. But humans distinguish themselves not only through their ability to express themselves in a linguistically complex manner and create sophisticated tools but also through their awareness of their own mortality.

At the end of the book Wiesner casts a short and rather anxious look at mankind's future, but German writer Erich Kästner has the last word: 'The basic truth of human fate is that we're still at heart an ancient ape.' In fact every chapter opens with an apt and gently humorous quotation about the nature and wonder of the animal kingdom from famous writers including Borges, Wilhelm Busch and Saint-Exupéry.

Far from rendering a trip to the zoo superfluous, Wiesner and Mattei's special book will inspire you to see the animals face-to-face. Should you find yourself at Hellabrun Zoo in Munich, be sure to look out for the larger-scale versions of Wiesner and Mattei's work: the plates were originally conceived as information panels for the cages. And now there's the book for those wet weather days...