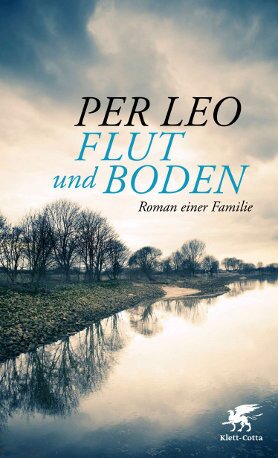 “Family crest, humanism, shipbuilding, villa, heath, farmland, blitzkrieg, Sturmbannführer. That’s where I come from.” Just one of many possible backgrounds of a typical German family. It’s also the basis of Per Leo’s literary debut, the novel “Flut und Boden” (Flood and soil), which was nominated for the Leipzig Book Fair Prize in spring 2014. Judging from the title, one might assume the author was merely poking fun at the “blood and soil” ideology of the National Socialists. But Per Leo didn’t write a satirical book. Rather the novel explores his family history with what at times appears to be biting scrutiny.
Per Leo, born in 1972, is an historian actually. His dissertation was published by the distinguished Berlin-based publisher Matthes & Seitz. It was titled “The Will of Being – Ideological Culture, Characterological Thinking and Anti-Semitism in Germany from 1890 to 1940”. Leo originally conceived “Flut und Boden” as a work of non-fiction. In the end, the book received the subtitle “A novel of a family” which tells us that this is no fictitious novel, but an autobiographical rendering of his family’s history.
In the novel we learn of the seductive appeal that the true story had on the narrator Per Leo. It was received all too well at parties and therapy sessions. “No one would have felt intrigued if I were the grandson of Himmler or Mengele. But the neatly wrapped mix of old family and blond SS officer seemed to immediately penetrate the central cortex and electrify a major pathway of the vegetative nervous system. It would cause rapid blinking and cheek reddening as if Fest were reporting live from Speer himself.”
According to Per Leo, the intellectual treatment with this subject had a curative, sobering effect on him. It enabled him to tell the story of his family. The main setting for the confrontation with his family history is a large house on Weserstrasse 84 in Vegesack near Bremen, a symbol of the rise and fall of the Leo family. The person, around whom the story revolves, had lived there until 1993: grandfather Friedrich Leo who received the chance to fulfil his father’s ideal of manhood thanks to World War II:
“After August 1939, Friedrich was a completely normal German man for just over a year. Relatively amiable, getting through boot camp with the other Wehrmacht recruits, standing guard in the frigid air, and then very jauntily attacking France. But by October 1940, the top brass had been lounging with God in Paris for a long time and Berlin had had enough of this waste of human capital.”
Friedrich Leo rose in ranks to what was “factually the third man” in the SS Racial Office thanks to the patronage of his superior. In other words, he was responsible for “training and inspecting all aptitude examiners,” sent to inspect – and reject – the civilians in the conquered regions based on racial criteria. “On 1 April 1942, while colleagues in Minsk were just finishing their daily workload of 500 Jews, Friedrich was allowed to officially call himself the department head at the RuSHA SS Racial Office.”
With such acerbic remarks, the narrator Per Leo makes two things clear: Being a collaborator also means being a murderer, and secondly, that he, the grandson, has liberated himself from his grandfather’s past. An illusion, which he as an historian is well aware of, but it allows him to craft the story in a disconcertingly relaxed way, free of the pathos of guilt, and like a distant observer, analyse how Friedrich Leo could become a Nazi and how his social downfall affected his sons and grandchildren.
We are familiar with the dark tales of fathers and grandfathers, of silence, shame and guilt which has served as the basis for an entire genre of post-war, German-language literature. Yet Per Leo seems to have written his book with Goethe’s motto in mind, which he uses to characterise his great uncle Martin, the sensitive opposite of Friedrich Leo, and how Martin saw the world from the tower room in his parent’s home in Vegesack: “Not to discover anything new, but to look at what was discovered the way I saw it.”
Per Leo’s unique point of view and literary style takes aim at the hypocritical kitsch of coming to terms with the past. At times, his antidote is documentary, at others, it’s philosophical, a combination of excerpts from letters and diaries, digressions on eugenics, Protestantism and graphology in the style of popular non-fiction literature with psychological analyses of familial relations and quotes from contemporary pop culture. He offers a modern and personal interpretation of the Bildungsroman, preferring to tell a story that clearly aims to tie everything together.

Insa Wilke is a freelance literary critic and has written for radio and the Süddeutsche Zeitung among other outlets. She has been a member of various prize juries, including at the present time those for the Ingeborg Bachmann Prize and for Radio SWR’s monthly Bestenliste (‘Best-books list’). She has been a regular participant in Radio WDR3’s literary programme ‘Gutenbergs Welt’ (‘Gutenbergs world’) since 2013, and in SWR-TV’s round-table literary forum ‘lesenswert quartett’ since 2017. Insa Wilke was awarded the Alfred Kerr Prize for Literary Criticism in 2014.