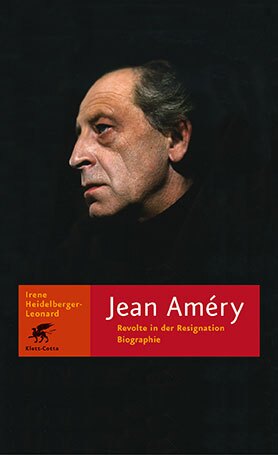 Irene Heidelberger-Leonard, the editor of the critical edition of Jean Améry’s works published by Klett-Cotta, brings a vast detailed knowledge of the journalistic, essayistic, and literary publications of this important Austrian author to bear in portraying Améry’s nexus of personal experience, literary creation, and public resonance. Heidelberger-Leonard’s multifaceted portrait of an author who was quite influential in many arenas depicts him against the backdrop of his times and is extraordinarily successful in pointing up the aspects of these times that shaped Améry’s life and writings.

Jean Améry, born Hans Mayer in 1912 in Vienna, is known to German readers primarily for his essayistic writings. His essay “On Torture,” which came out in 1965, first as a radio essay and then in printed form in the journal Merkur, describes and analyzes his experiences in Nazi interrogations and concentration camps. A first-hand account of this sort, which retains an intellectual detachment despite the author’s personal familiarity with the topic, was unique at that time and even today. Additional essay collections followed in rapid succession, and Améry was in high demand for interviews and discussions, once the Germans had become receptive to reappraising their own past after the Eichmann trial in Jerusalem and the Frankfurt Auschwitz process that began in late 1963.

As Heidelberger-Leonard’s book demonstrates, however, Améry was far more than a “professional concentration camper,” as he sometimes dubbed himself in a mixture of mockery and resignation. In a conscientious manner that incorporates ample detail, the author leads the reader through more than forty years of literary production. She begins with Améry’s first writing attempts as a schoolboy named Mayer, then moves on to his stint in the “salt mines” as a journalist and his abovementioned major essay collections, and concludes with an examination of his stories. For the most part, the biographer focuses on Améry’s literary works and uses his books as a basis to shed light on his personal, cultural, and political milieu.

The first third of the book centers on his family background, particularly on the family’s Austrian Catholicism and Judaism on the paternal side, and on urban life in Vienna and immersion in the rural idyll of the Ischl Mountains. The concept of home Améry developed in his later years in exile evidently had its roots in this period.

Améry began to participate in intellectual life at an early age. He experienced the civil war-like clashes between fascists and “Austromarxists,” and gradually embraced the ideas of the Viennese Circle, particularly those of the neo-positivists Carnap, Schlick, and Wittgenstein. He experienced a “rush of clarity” before he was even twenty, and in 1934, when there was a revolt against the Dollfuss government, Améry took an active role. He saw the signs of fascism looming on the horizon, but stayed in Austria until 1938 nonetheless, because he did not want to have his home wrenched away from him.

With one exception, relating to Améry’s first narrative work, Shipwrecked, Irene Heidelberger-Leonard’s depiction adheres closely to the biographical data until 1945.

In Shipwrecked, Améry created his (first) alter ego: the novel’s protagonist Eugen Althager. This work, which was never published, provides a “history of the Austrian mentality of the 1930s from the perspective of an unemployed Jewish self-educated man and intellectual.”

Then came his flight from Austria, arrival in Belgium, and first arrest in Brussels—absurdly, as an “enemy alien.” After his flight from a French prison camp in Gurs and his return to Belgium, Améry and his first wife Regine joined the Communist resistance to the Nazis. In 1943, he was arrested and tortured, and later—after he was “recognized” as a Jew—transported to Auschwitz-Monowitz. In early 1945, the Germans evacuated the camp and Améry was brought first to Dora-Mittelbau, a subcamp of Buchenwald, then to the concentration camp Bergen-Belsen, where he was eventually liberated by British troops in April 1945.

Améry began working on his essay The Psychology of the German People back in the spring of 1945, as well as on various fictionalized memoirs in which he dealt with the experience of torture and other topics. In contrast to his essay “On Torture,” which came out twenty years later, his fiction made the “mind triumph over matter” by having the tortured victim succeed in duping his tormentors with lies. The Psychology of the German People in particular offers astonishing insights into Améry’s outlook directly after his stay in a concentration camp. Instead of pronouncing all of the German people guilty, he is convinced that they are “reeducable,” “able to take responsibility for [their] … actions,” and “redeemable.”

Existentialism, in particular the writings of Jean-Paul Sartre, provided Améry with a way of looking at the world that supported this will to confidence, yet his lifelong correspondence with his school friend Ernst Mayer, and numerous letters to and from Maria Leitner, document Améry’s ongoing misery about the world and his incessant fluctuation between sanguine confidence and a conviction that existence is utterly pointless.

Birth of the Present-Day Era was published in 1961. In this “cultural essay,” Améry sought to fathom “nothing less… than the entire western world.” In doing so, he emerged from the “salt mines” of commissioned work.

With Helmut Heissenbüttel’s support, Améry began to publish his most important texts beginning in the mid-1960s. Between 1965 and 1971 he published three volumes of essays: At the Mind’s Limits, On Aging, and Lean Journeyman Years. It appeared that for the first time Améry was getting the reaction he had hoped for. The intellectual community, notably Heissenbüttel, Andersch, Paeschke, Bachmann, and Canetti, waxed enthusiastic. He also received numerous honors.

These books formed a trilogy in which autobiographical and contemporary historical perspectives intersected. At the Mind’s Limits: Contemplations by a Survivor on Auschwitz and its Realities takes a hard look at his experiences as a concentration camp inmate, the loss of “cultural personality” and the “mind’s limits,” which “failed him” in his hour of greatest need.

On Aging: Revolt and Resignation was published in 1968. Here Améry constructed a parallel between “being Jewish” and aging, which, according to Heidelberger-Leonard “requires a fair amount of imagination” to grasp. In Améry’s view, the “gaze of the Other… [is what] makes the aging person an aging person, the same way that the gaze of the anti-Semite makes a Jew a Jew.” This book was also a big success and continues to be reprinted time and again.

The final volume of the trilogy, Lean Journeyman Years, was published in 1971. In this book, the author took the geographical and chronological junctures of his life as points of departure for reflections on his life and times. Vienna, Paris, Cologne, 1938, 1943, 1945, and 1966 were the points at which Améry described “the chronological development of the intellect.” Heidelberger-Leonard finds that quotations, memories, and constructions are so organically interwoven, and the vigor that breathes life into the ideas so inspired, that philosophy and literature converge.”

The last section of the biography focuses on Jean Améry as a writer of fiction. Apart from On Suicide: A Discourse on Voluntary Death, which was published in 1976 and caused a sensation, Améry devoted himself in the final years of his life to the major project of finally making a name for himself as a literary figure and not “just” as an essayist.

Lefeu, or The Demolition, which was published in 1974, went on to become Améry’s greatest literary work. The protagonist is Lefeu/Feuermann, a Holocaust survivor, in whose conflicted personality both buried past and self-determined present are given expression. Améry’s final foray into the field of fiction was the text Rendezvous in Oudenaarde. Here, too, he experimented with the relationship between reality and fiction and tried to make them as congruent as possible, with the goal of “substantiating the reality of literary characters.” Jean Améry did not live long enough to find out how the public reacted to it, since he took his own life in October 1978 in Salzburg.

Irene Heidelberger-Leonard’s biography succeeds in revealing the inextricable entwinement of Améry’s life, thought, and writings. Even though her style might not appeal to some critics, and the minute subdivisions of the chapters may detract from the flow of the text at times, this biography demonstrates the importance of Améry in his era and shows that his relevance extends far beyond the slogans we associate with him.