Whoever goes a traveling....

Traveling broadens the mind. Traveling is fun. While traveling we encounter distant and foreign worlds. That is true for travels in the real world, but even more so for trips into the world of (children’s-) literature. With the help of travel books we can gain experiences and make discoveries, which we would never make in our daily life. We can explore exciting, interesting or even dangerous situations without ever leaving the house. We can travel to countries, which we don’t even know be it to South America or to the Arab world. And we can go on fantasy travels, which only happen in the mind or in a dream. Like "Paula’s Travels."

When two artists, such as Paul Maar and Eva Muggenthaler jointly create a picture book, it can only turn into something magnificent! The brilliant inventor of the "Sams" children’s book series and the award winning illustrator published "Paula’s Travels" for the first time in 2007. But the book hasn’t lost any of its original charm. In numerous children’s novels and picture books Paul Maar has qualified as a specialist for fantasy; with "Lippels Traum" (Lippel’s Dream) he, in his own way, connected with the fairy tales from The Arabian Nights. And Eva Muggenthaler’s numerous picture books, such as "1000 Dummheiten" (1000 Follies) or "Als die Fische spazieren gingen" (When the Fish Went for a Walk) are creative disputes with the many varied ranges of fantasy.

„Paula’s Travels"begins like so many bed-time stories. Paula dreams of a country, in which all objects and people are circular or roly-poly - from the emperor to the schoolchild. This is why crisp bread or chocolate – being angular – are forbidden. But before Paula is irreversibly "made round as the landscape" by the "circular police", she can flee. In "Thousand Corner Land" she suffers a similar fate. Here she also manages to flee, just as later from the "Shades of Red Land" and from the little "Upside Down Land" where everything and everybody stands on their head.

So far, so fantastical. But also: so creative. Since Little Paula, being an outsider, manages to create a bolt hole in each respective country and to disappear again and again; (To draw a way out for oneself is a popular motif in picture books. From Crockett Johnsons "Harald And The Magic Chalk" to Aaron Becker’s "The Journey.") until she finally lands on eiderdowns and cuddly cushions in "Bed Land" and sleeps until the next morning.

Paul Maar’s verses are as brisk and vivid as the story. By all means one has to read the picture book out aloud! Every country is painted in a witty-individual way; and then in a kind of refrain, Paula’s respective unsuccessful domestication and flight follow. For this purpose the rhyme scheme changes from episode to episode. Paul Maar uses traditional poetic motifs to balance the colorful fantasy of the trip.

Can one present an artist with more beautiful motifs than a "Thousand Corner Land "or a "Shades of Red Land"? And Eva Muggenthaler’s pictures take up the challenge with panache! In terms of a purely visual perspective they dominate Maar’s verses, but that is only adequate for a picture book! They just ooze colors, forms, fantasy and in many small extra episodes continue to tell the dream ballad. In these episodes not everything is straightforward!

For instance, when in the little "Upside Down Land" the clock is pictured the wrong way round, but the book is additionally shown mirror-inverted. Paula’s travels lead into the illogical, into fun and craziness, the further away from our reality, the better!

Whoever perceives Germany as the country of logic, order and accuracy is due to this picture book - once again – taught a lesson in matters of originality and exoticism. Not only German children will enjoy it – and they then might also want to listen to the musical, which originated from the book and will be performed by Konstantin Wecker and the Munich Radio Orchestra. 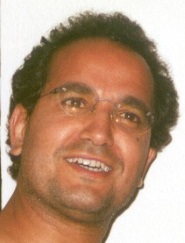 What struck you in particular about this title?

The story is told smoothly and in a compelling fashion for children. I liked her imagination and ingenuity, and also that she deals with the fate of a person who is different, outside the norm, who refuses to blindly obey, or accept that everything is uniform and dull.

What challenges do you face as an Arabic translator of a German children's book?

Rhymes and verses! The story was written by the poet Paul Maar. The greatest challenge was to translate a rhymed story written in verse into Arabic while preserving the musicality of the text. The Arabic text needed to rhyme without losing any of the content. The poet Rim Najmi, with whom I worked together on the translation, managed superbly to transform my unrhymed translation of the content into child-friendly rhymed verse.

A little girl named Paula takes a dream journey through wondrous worlds that have strict laws: she ends up in a colorful country of circles, where she is captured by the ball police and is forced to adapt to the sphere-shaped landscape. She manages to escape, but also doesn’t fit in the land of a thousand corners, or in the land of red tones, and the residents of upside down land don’t think she belongs at all. But fortunately, Paula always manages to escape, and finally ends up in the land of soft beds.