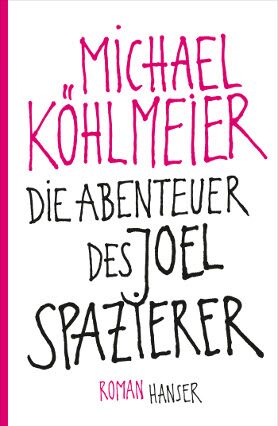 ​Joel Spazierer is a con artist. He lies about anything and everything and has no qualms about throwing anybody under the bus if it would make for a good story. He also has no sense of morals, changes identities constantly and literally walks over dead bodies. The Austrian writer Michael Köhlmeier’s Die Abenteuer des Joel Spazierer is a modern day picaresque novel that packs a wallop: his hero and first person narrator keeps us on the edge of our seats for the entire 653 pages. And even though Spazierer ruthlessly connives to get his way any no matter what, we can’t help but follow him spellbound as he zigzags across Europe. The smooth-talking Spazierer’s motto is: "The truth is overrated," and Köhlmeier, who has written several novels and short stories, constructs a thought-provoking moral, philosophical and theological frame in the process.

Spazierer, a.k.a András Fülöp, is born in Hungary in 1949, the same year as his creator, and is raised by his grandparents. Before he turns four, the State Security arrests his grandfather, an influential doctor, along with the boy’s grandmother on suspicion of treason. András is forced to take care of himself for several days and discovers this suits him just fine. From then on, he takes charge of raising himself: "I felt heroic-more than heroic in fact: blessed, chosen, powerful and invincible.”
The corner stone for his life as a con artist is now firmly set in place. Although his grandparents return and flee with András and his parents to Austria, the boy soon runs away and starts turning tricks as a male prostitute, stealing and cheating. His defining feature is a profound ethical abstinence: Nothing is sacred to him. Even as a nine-year-old staring up at a starry summer sky, he doesn’t feel a tinge of reverence for nature, instead he thinks the shining firmament above seems rather exaggerated. "I had no convictions," neither good nor evil exists for him.

András , who frequently changes his name throughout the book, calculatingly takes on the Jewish sounding name Joel Spazierer and as a young man commits murder without so much as batting an eyelash. But the inner-workings of his characters are not of much concern to Köhlmeier, instead he prefers to leave it up to the reader to unlock the psychopathology of his rogues.
Köhlmeier’s greatest feat, of course, is to keep our attention riveted for hundreds of pages to a character who possesses such abhorrent personality traits. Yet it is precisely his icy imperturbability that makes Joel Spazierer so fascinating. Spazierer’s dealings with the outside world raise important questions: Do people have an innate morality? What is the foundation of our moral beliefs and the achievements of our civilization, and how do we make somebody liable who consciously disregards them all?

Michael Köhlmeier is a shrewd constructor. He zigzags from location to location, and offers us insights into a variety of milieus: the Italian upper classes, the drug world and Austrian intellectuals.

The GDR episode is a literary bravura piece: in1983, Spazierer takes refuge as the alleged grandson of the Communist leader Ernst Thalmann, who was executed by the Nazis – and enjoys great success at that, he rises to become a highly sought-after professor who lectures on "socialist transcendence," gains a cult status, and has two daughters with two different women. Michael Köhlmeier nonchalantly displays his talent as a first-rate storyteller, and is second to nobody, including his wily prankster. It would be impossible to tell a more profound or entertaining story about a villain.

​Maike Albath is a literary critic and journalist for the radio stations Deutschlandfunk and DeutschlandRadioKultur. She also writes for the newspapers Neue Zürcher Zeitung and the Süddeutsche Zeitung. Her books “Der Geist von Turin” (2010) and “Rom, Träume “(2013) were published by Berenberg Verlag.