​“The camels are yet to come.” This old-fashioned sentence could stem from an Arabian adventure novel by Karl May or from Johann Wolfgang von Goethe's “Novelle,” in which wild animals escape from a circus fire. Indeed, the impressive sentence about the camels was written by Jonas Lüscher, a 37- year-old Swiss author, who is currently living in Munich. In his novella, „Frühling der Barbaren“ [“Spring of the barbarians”] he has taken an old-school approach, creating a frame story and an abundance of cleverly resolved dramatic twists.
Preising, heir to a Swiss factory, tells a fellow patient in a psychiatric ward about his adventures in Tunisia, which include a series of accidents that almost always involve camels. On the way to a luxury resort in the oasis Chub, Preising, the self-identified “cultural relativist,” witnesses a grotesque collision between a caravan and a tourist: “One of the beasts had literally wrapped itself round the twin front axle of the bus. Its unnaturally elongated neck dangled over the hot rubber of the giant tyre, tongue lolling from its mouth between bared yellow teeth, one stiff leg projecting heavenwards between the wheel and the body, its wealed foot bent at a sharp angle.”
Over the top sentences such as these, which are filled with exuberantly descriptive detail, take some getting used to. „Frühling der Barbaren“ is a literary delight filled with strange flukes. Apparently Jonas Lüscher took the philosopher Friedrich Schlegel at his word. In 1789, Schlegel proclaimed, "fairytale fantasy, ironic lightness and overflowing abundance" belong to the stylistic devices of the arabesque. Lüscher fulfills this aesthetic program exemplarily. At the same time, his novel depicts the outbreak of a revolution that brings to mind the Arab Spring. Tunisian history also plays a part in the form of Dido, Carthage’s patron saint.
Occident and Orient clash with tragicomic consequences: and this is a theme that runs throughout the book. Traveling as a breakfast director, Preising takes a trip to Tunisia to visit a supplier. His telecommunications supply company is convinced that the Swiss German name Preising sounds far more trustworthy than the Slavic tinged Bosnian name Prodanovic, the "decisive service provider and value generator." This contrast structures the text: Lüscher sets the contemplative Preising in stark contrast to a hyped-up capitalist present day world. This artful, yet never artificial, novella moves steadily towards a contemporary turning point: “While Preising slept, England went under.”
The author adds a 19th century flourish to depict a fictitious stock market crash that happens in our own day. This creates an illuminating alienation effect. Rich young Englishmen from the world of London finance, who are lavishly celebrating a wedding at the luxury resort, stand in as the protagonists of unfettered capitalism. Preising befriends the groom’s bored mother. Her husband, a wiry sociology professor, coerces him into going on an expedition with him: “Preising grabbed the Englishman’s greasy belt, as he perilously ventured on his stomach far beyond the fragile earthen wall and grew, in equal measure, fascinated and indignant at the man’s completely hairless and astoundingly white bony behind, which inch by inch was peeling out of his utility pants.
Such are the mini-dramas that give the text its special flavor. The author exposes Western civilization inch by inch. Preising may be able to save the professor from falling into the abyss, but the following night the British pound plummets to the depths. Beneath the palm trees, the wealthy hotel guests experience their own personal Waterloo, and bankruptcy turns them every one of them into a predator. Only Preising, the neutral Swiss protagonist, remains the perfect gentleman - and, above all, observer. Jonas Lüscher's novella was on the longlist for this year's German Book Prize. The book is wondrous in its ability to create the impression it’s from another era and has revitalized a venerable literary genre. Above all, „Frühling der Barbaren“ is a highly entertaining adventure of the mind.

​The author is a freelance literary critic and cultural journalist based in Munich and was a Litrix.de jury member for literary fiction from 2009-2012.

Translated by Zaia Alexander
Other Books 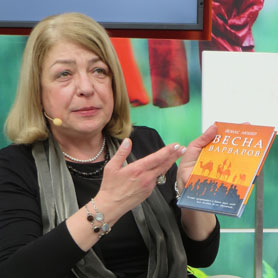