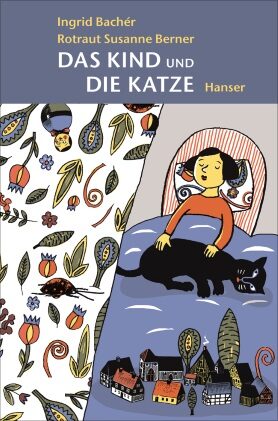 A night of fright

While her parents drive away for a pleasant evening, a little girl must face her fears. Not only is she home alone, a storm is brewing and she has to withstand the thunder and lightning on her own. Luckily she’s got the black cat by her side. "Come to me," the child says to the cat, "I haven’t gone to sleep yet." The animal is her contact person, offers her comfort and plenty of cuddling. Fantasy helps the child survive the night: the cat turns into a big, powerful lion that is able to swallow the lightning and protects her.

The illustrations assume the role of prologue and epilogue. In the beginning, we see a series of images showing the father and mother dressing, before driving away in their car. The child's room resembles a stage with carefully chosen props. The moon is a silent observer, commenting on the events with superbly expressive facial expressions. The more frightening, darker and powerful the thunderstorm grows, the more the proportions shift and fantasy takes over. "We know how reality can be suspended in dreams, how objects transform and identities change. This proves especially true in this dream, fear and initiation story," explains Rotraut Susanne Berner.

Ingrid Bachér tells the story of a timeless situation that could take place anywhere in the world. It is about fear, a phenomenon of nature, and the power of imagination. The author, who is the great-granddaughter of renowned author Theodor Storm, had requested that Rotraut Susanne Berner illustrate her story, which she had written for her daughter in the 1960s.

First published by Insel Almanach in 1962, it was re-published in the series "Die tollen Hefte" (Büchergilde Gutenberg) with illustrations by the renowned artist. "The author's ability to feel into a being who is simultaneously afraid and courageous, and her ability to portray it in such powerful words and imagery, is what makes this free and literary story so gripping," says Berner.

Image and text stand on their own in this new edition, alternating in double-page spreads, thus allowing space for the poignant narrative to unfold. These are original flat screen prints in five colors. The award-winning Munich-based illustrator—she was the recipient of the Hans Christian Andersen Prize in 2016—designed the complete layout of the book, presenting a perfect dramaturgy to the reader and viewer.

One is left with the impression of great intensity. Especially unforgettable is the image of the roaring lion with the little girl clinging to his fur as the image explodes from the frame. A story that can be read together with children from age eight that promises an unforgettable reading and aesthetic experience for people of all ages.

Antje Ehmann is a freelance journalist. Specialising in books for children and young adults, she writes for various publications including ‘Neue Zürcher Zeitung’, ‘BuchMarkt’, ‘BÜCHER-MAGAZIN’, ‘dpa-Kindernachrichten’ and ‘mare’. From 2011 to 2014 she was a member of the Critics’ Jury for the German Youth Literature Prize (Deutscher Jugendliteraturpreis), and in 2016 she became a member of the jury for the Illustration Prize for Children’s and Youth Literature (Illustrationspreis für Kinder- und Jugendliteratur) offered by the Gemeinschaftswerk der evangelischen Publizistik.

The night is lonesome. It’s the time when darkness crawls into every corner of the room. The little girl lies in bed and doesn’t find sleep. Should she turn on the light? Should she get up? No, she doesn’t want to be afraid! She wants to be strong! What if there’s a thunderstorm and the flashes throw wild shadows on the walls? The girl calls her cat for help. It is soft and tender and much smaller than the child. But it can also be big and dangerous and strong as a lion. The girl believes with all her heart: the cat will protect her. She won’t be afraid of anything anymore. Through the power of fantasy she can always be courageous and — if worst comes to worst — make protectors appear. An exceptional bedtime story, admirably illustrated by Rotraut Susanne Berner.