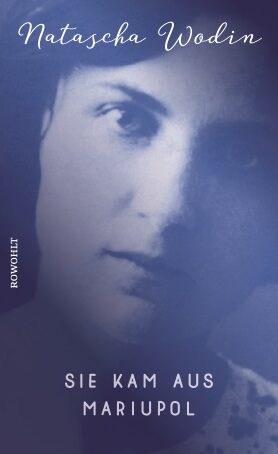 The untold fate of Ukrainian forced laborers.
Tableau of a tragedy of European civilization

For many it came as a surprise when Natasha Wodin won the Leipzig Book Fair Award in 2017. While the author had been well-respected, she didn’t play a prominent role in the German-language literature business. She also didn’t choose a particularly easy subject, yet the decision to award her the prize apparently was unanimous. Natasha Wodin wrote the story of her mother’s life—a fate marked by war that we’ve rarely heard or read about before, and written with such historiographical profundity and stylistic aplomb that it is a must for avid readers.

Natasha Wodin was born 1945 in the Franconian provinces as the child of Soviet forced laborers, who worked in the Leipzig Flick-Werke and lost their health because of it. She spent her early childhood in a camp for displaced persons called Valka, which was notorious for its "anarchic criminality." The family later was transplanted to a small settlement in the same area, where Natasha Wodin continues to experience stigmatization through poverty, emotional abuse, and a foreignness, which in post-war German society provoked extreme hostility. Longing for a "respectable family background", she becomes a notorious liar, ultimately inventing a dream world identity that includes an aristocratic family history. A ludicrous notion given the circumstances! Decades later, after Natascha Wodin has established herself as an author and translator, she returns to her family’s past:

And she makes an astounding discovery: her mother's side of the family indeed had belonged to one of the wealthiest Italian families in the Ukrainian port city of Mariupol, and they had owned one of the two autos available in the city. During the Russian Revolution, Wodin's family was dispossessed, an aunt was exiled for counterrevolutionary activities, and an uncle delighted the then rulers with the soft tenor of his opera voice. Not even on her deathbed, had Wodin's mother mentioned a word about this background. What else had she locked away in her heart?

"Had you seen the things I’ve seen ..." Yevgenia Yakovlev Yevchenko had left her daughter Natasha the sentence to complete, since she had never been able to do so for her self. Life had silenced her, and left her traumatized psychologically: first during the Stalinist purges, then during the Soviet occupation, in bloodthirsty war torn Germany, and lastly in a West Germany that considered Russia the enemy. The mother drowned herself in the Regnitz River in the mid-1950s, leaving behind the 10 year-old Wodin, her younger sister and an alcoholic father: a "Russian child"!

Now in her late 60s, Wodin’s book begins by searching for clues in a Russian chatroom for people displaced by war. There she meets a genealogist from Mariupol who starts the ball rolling. Soon Wodin discovers a second cousin named Kiril, who gives her the names of other relatives. She later discovers that he not only was psychotic, but also had committed matricide—the late victim of a family that had grown dysfunctional through political violence.

The first part of the book follows the chronology of Wodin’s research and reconstructs the pre-revolutionary society of the cosmopolitan trade city Mariupol. For the other parts of the book, Natasha Wodin takes a more literary turn, imagining her Aunt Lidia’s circumstances while interned in the prison camp on the White Sea, as well as feeling her way into the dismal fate of her parents condemned to constant flight and exile. The Wodins had spent the best years of their lives fleeing their oppressors and working as slave laborers in the Flick-Werken. First they’d fled the Russian dictators who had branded them enemies of the people (because of their bourgeois ancestry), then as traitors to the fatherland (because they were German POWs), and then later they are stigmatized as beasts from the East, as "human garbage," in postwar German society They cannot return home to the Ukraine, which leaves them only one option: remain in a place where it is impossible to live a life of dignity and decency.

Natasha Wodin liberates herself from this claustrophobic and oppressive world, choosing to lead the life of an independent writer, along with a difficult marriage to the author Wolfgang Hilbig. "What has all that got to do with me," she says in the book, once her family’s fate draws too close for comfort: "The Soviet and the post-Soviet fiasco, the never-ending Russian fate, the inability to awaken from the collective nightmare, imprisoned between subjugation and anarchy, between suffering and violence, this whole unsolved, dark world, this family history of powerlessness, dispossession, arbitrariness and death, this unhappy Russia—the eternal Mater Dolorosa, who so relentlessly embraced her children?"

In artfully written dense prose that never remotely borders on creating kitsch out of misery, Natasha Wodin succeeds in creating far more than the reconstruction of a family’s disastrous fate. With well-measured distance and empathy for all victims of persecution and exile, she creates a tableau that shows the tragedy of European civilization.

The crimes of the twentieth century, which repeatedly have been described, are not relativized by the fate of the slave laborers, rather they have been completed. Thousands of "primitive, short, stomping Slavs," as Hitler had called them, suffered the fate of living as pariahs both in the Soviet Union and Germany and it lasted well into the post-war era.

​Katharina Teutsch is a journalist and critic. She writes for newspapers and magazines such as: the Frankfurter Allgemeine Zeitung, Tagesspiegel, die Zeit, PhilosophieMagazin and for Deutschlandradio Kultur.

"If you’d seen what I’ve seen…" Natascha Wodin heard this sentence many times in her early childhood, yet her mother took her memories with her to the grave. Natascha was ten years old when she died; all the little girl knew was that they were detritus, human debris left over from the war. Why had they lived in a camp for ‘displaced persons’? Where did her mother come from? What had she experienced? Decades later, the ‘black box’ of her own past began to open slightly, with Wodin gaining more and more insights as time progressed. She Came From Mariupol is an exceptional book that details a forensic search for the truth. Here, Wodin investigates the past of her Ukrainian mother, who grew up in the harbour city of Mariupol and was forcibly removed in 1943 to Germany as an ‘Eastern worker’ along with her husband. This book describes in absorbing and at times harrowing detail a topic seen by many as a footnote to history, a grim appendix to the Holocaust: the use of forced labour in the Third Reich. Her mother had already experienced the downfall of her aristocratic family during Stalin’s regime of terror and was forced to board a German ship of unknown destination. Through this book, she steps forward from anonymity, given an identity by her own daughter. This compelling narrative enables Natascha Wodin to speak tenderly of her "poor little mother who went mad", and whose persona becomes tangible for the reader. The retelling of her story also allows Wodin to show us the true extent of her loss.
This is a darkly radiant account of one person’s fate, developing momentous emotive power; its subject serves as a proxy for the fate of millions.

She Came From Mariupol is nothing short of a major literary event.