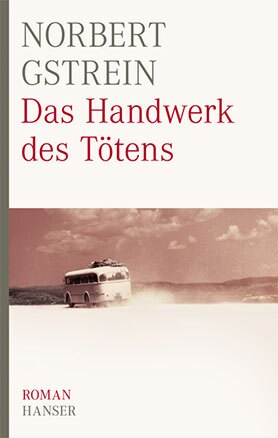 The Balkan wars, a beautiful woman and three journalists in search of the 'true' story: this often suspenseful triangle forms the framework for Norbert Gstreins latest novel, The Craft of Killing , for which he was recently awarded the prestigious Uwe Johnson Prize. What is the appropriate way to write about war, should one even, in an age dominated by all-embracing, globalised media, still be writing novels at all? These are the big questions which exercise the three male protagonists in this novel – and the author as well, of course.

Norbert Gstrein has dedicated his book to the memory of the Stern magazine reporter Gabriel Grüner, who was shot in Kosovo in the summer of 1999. However, the death of Grüner, ‘about whom I know too little to be able to tell the story of his life and death,’ only provided the initial impetus for Gstrein’s novel, which has no documentary ambitions. Instead Gstrein’s narrative focuses on a fictitious Austrian war correspondent, Christian Allmayer, who has reported on the disintegration of Yugoslavia from the very beginning and is killed in an ambush in Kosovo in 1999.

Besides his reports on the war, Allmayer also leaves behind many personal notes, plus the tape of an interview with a Croatian warlord, Slavko. This interview with one of the many whose ‘craft’ is killing is not only the key event in Allmayer’s life, but also in the novel as a whole. With the answer Allmayer is given to the central question, ‘What is it like to kill someone?’ he himself is drawn into the web of guilt and responsibility; at the same the amoral nature of warfare affects him in a very immediate way: his death is shown to be another of its consequences.

For his friend Paul, also a journalist and a moderately successful travel writer, Allmayer’s tragic fate is a welcome opportunity to write his novel, a project he has been mulling over for years without getting down to it. Despite his shock at the terrible deed, despite the sorrow he feels, the ‘Allmayer case’ seems to provide him with the long-sought plot for his novel. Obsessed with the idea of solving the mystery of his friend’s violent death, he devotes an excessive amount of time and energy to researching Allmayer’s life and work as a journalist. Among other things, he undertakes a journey through the former combat zones in Croatia and Bosnia together with his partner, Helena, who comes from Dalmatia, and a journalist friend, the anonymous first-person narrator of the novel.

Driven by this obsessive determination to uncover the ‘true’ circumstances surrounding Allmayer’s death, Paul gets more and more caught up in a tangle of reconstruction, supposition and myth-making, only to come to the disillusioned realisation that, ‘One dead man doesn’t make a novel.’ Eventually he is no longer able to keep living and writing, reality and fiction apart; there comes a point when even his partner, Helena, only exists in the role he has allocated her as ‘senior liaison officer to the world of my novel.’ When his projected novel comes to naught there is, sadly, nothing left for him but to take his own life.

He commits suicide in a hotel room in Zagreb, leaving, instead of a farewell letter, just the one sentence from Cesare Pavese’s This Craft of Living , ‘I will not write any more,’ thus documenting the precarious relationship between the craft of killing and the craft of writing. It is writing about the war and its consequences for the individual that destroys Paul, as it did Allmayer before him. When he visits the Balkans, he is forced to recognise that it is ‘landscapes after the battle’ he is driving through and it was too late to write about them from the very start, since ‘what is written cannot bring a single dead person back to life.’

After Paul’s sad end, the anonymous narrator feels morally obliged to complete his projected novel. And the result of this third approach to the impossibility of writing about war is the novel we have in front of us. The first-person narrator is ‘in the grip of the same malady’ as Paul, namely ‘the dream of at some point writing a novel that would make life bearable, a compensation – though for what I could not say.’

The narrator approaches the whole story – Allmayer’s as well as Paul and Helena’s – analytically. His novel is consciously designed as a counter-version to Paul’s, as the latter more and more lost touch with reality in both his writing and his life. In particular he expunges Paul’s intention of having Helena die in his novel. This impulse to correct the relationship between reality and fiction comes from life, not art: like Paul, the narrator has fallen in love with the beautiful Helena.

Clearly Gstrein’s text is set up as a kind of – at first sight not entirely uncomplicated – narrative experiment: the triple lens (not to mention the allusion to Conrad’s Almayer’s Folly ), through which he focuses on the material, does result in a distancing of the events of the war, but at the same time it allows him the scope for a forceful demonstration of the second-hand, ‘reality-reduced’ nature of any representation of war.

Firstly, then, Gstrein’s The Craft of Killing is a literary contribution to the ongoing debate about the way the media construct reality and the increasingly functional nature of war reporting. Secondly, the novel illustrates Gstrein’s hypothesis that it is impossible to reduce the truth about any event to a single, universally accepted ‘truth’. Thirdly, and this is the decisive point, Gstrein succeeds in presenting these complex ideas on epistemology and the nature of language in the form of a detective-style mystery. Together with the many realistic descriptions of the Balkans and a love triangle, it all adds up to a multifaceted and fascinating story.

In a pleasantly detached, yet insistent and precise language, and showing great mastery of style, Gstrein’s latest novel demonstrates how one can talk about the horrors of war while still avoiding cliché and affectation, stylisation and journalistic jargon.