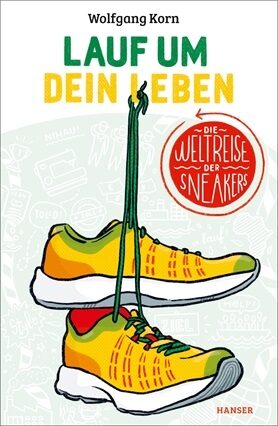 Open Wolfgang Korn’s highly topical book, and we encounter within its 200-plus pages three different narratives all rolled into one: the story of a well-researched piece of reporting for a regional newspaper that vividly evokes the craft of print and online journalism; the story of a particular product, namely a type of footwear designed for long-distance runners that has morphed into a cult object and must-have everyday accessory; lastly, and as the essential core of the book, a detailed description of the conditions in which such footwear is produced - footwear that is manufactured in low-wage countries, but sold at exorbitant prices in countries such as ours. These three strands are closely interwoven. Anyone who remembers Wolfgang Korn’s highly praised book about the journey of a fleece jacket from Asia to a chain store’s bargain bin (‘Die Weltreise einer Fleeceweste’, published in 2009; English edition: ‘Made on Earth’) will notice the similarities in subject matter, but will also notice that the story is recounted in a different manner in this new book.

‘Lauf um Dein Leben’ chooses to construct its narrative with the help of frequent references to the way the lives of particular individuals have been affected. The story unfolded in Korn’s reportage is also the story of a middle-aged journalist’s determination to strike a balance in the way he deals with his subject matter between involvement and detachment. The story of sneakers becomes a discourse on specific manufacturers and on the market and marketing mechanisms involved, but it also serves to dispel various widespread myths. Korn’s visits in the course of his researches to the city of Wenzhou, centre of the Chinese shoe industry, and to Ethiopia, where Chinese companies have established production units because labour has meanwhile become too expensive in China itself, take him to factories that all look the same no matter where in the world they are located. Furthermore, the author’s researches in Ethiopia, the land that has produced the world’s greatest marathon runners, also take him to primitive training camps where the runners of the future are recruited, only to end up in Europe in slave-like subservience to their teams.

The accounts of the various journeys, the descriptions of the tribulations of the research process, and the resulting pieces of print and online journalism are all skilfully interwoven with one another - but the key quality of the book lies in its highly effective presentation of the facts and backgrounds behind these world-girdling production processes and marketing networks. In depicting his own life as a journalist Wolfgang Korn simultaneously delivers a powerful argument in favour of the ethos and indispensability of his profession, and in so doing provides a distinctly personal entrée to his topic whilst also framing it in an interesting manner. That an appeal to the reader is a fundamental element here is further emphasised towards the end of the book: on the one hand it offers the utopian vision of a strike on the part of all the world’s greatest runners in protest at the complex interconnections between sport and economics that are revealed in the course of the narrative, while on the other hand it sets out detailed proposals for a fairer way of producing high-value shoes in small-scale enterprises in Africa. The inclusion of this explicit ethical message is perfectly reasonable given that the book is aimed at the young - but it isn’t really at all necessary, as the facts set out here speak for themselves in the clearest possible terms.

Michael Schmitt, Dr. phil. (b. 1959 in Trier) is a Germanist and historian. He began working in the book trade in 1985, and then worked as a freelance editor and journalist. Since 1993, he has worked as an editor at ZDF / 3sat, and as a literary critic for 3sat-Kulturzeit since 1995. He is a freelance critic for NZZ, SZ and DLF, and is a jury member for: the German Book Prize, the Wilhelm Raabe Literature Prize, the James Krüss Prize, Kranichsteiner Youth Literature Scholarship and the “Best 7 Books for Young Readers”.

Berlin, China, Ethopia – An exciting journey around the globe. For everybody interested in understanding how world trade works.

This is a thrilling young adult book about the search for a pair of sneakers and a well-informed research trip on globalization. When a peculiar pair of sneakers is found at the Berlin Marathon, a second race begins for a reporter: He is supposed to find out who wore these shoes, who designed them, and the location of their production. His journey leads him from German brand designers to product pirates in China to cheap labor in Ethopia. He uncovers how the competition for resources and cheap manufacturing determines the complex structure of world
trade. With the example of a gripping story, this book illustrates the mechanisms and connections of globalization.