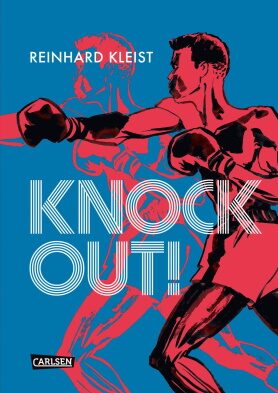 The very first few pages pull the reader in with slender, vertical images depicting the back of an old, typically New York apartment building. A movie-like pan artistically carries the eye to a door on the ground-floor: A male figure emerges, swaying drunkenly along the alleyway. Over the following pages we see him ambushed by young thugs who have cowardly lain in wait: A black man coming out of a gay bar? They don't like that. That the old man in question was once a world famous – and equally notorious – boxer doesn't help him much in this situation. He's brutally beaten.

The exposition is typical of the style of Berlin-based graphic novel artist Reinhard Kleist. The reader is reminded of the classic black-and-white film noir aesthetic of American cinema. Kleist trenchantly sketches the framework plot of the central character, a broken hero, before deploying the central flashback that traces the most important points of the life of the black boxer Emile Griffith (1938–2013). At an early age, the young man is working in a hat store when his powerful stature leads him to be introduced to the boxing trainer Mr. Clancy – who soon arranges his first fight.

Griffith's most traumatic experience dates back to 1962 when he injured the reigning welterweight world campion Benny Paret so badly that Paret fell into a coma and died in the hospital a few days later. It was the first fatal boxing match to be broadcast live on television.

Despite having been an accident, Emile Griffith bore the guilt of it for his whole life, and Kleist personifies this guilt in the form of the recurring, nighttime "demon" that visits Griffith in difficult times.

Having grown up in the U.S. Virgin Islands in the Caribbean, Griffith began his boxing career at a young age. This despite his gentle nature and a passion for designing women's hats. The graphic novel adaptation of his impressive life touchingly shows how torn a homosexual man in the boxing world of the sixties had to be. Despite many problems, concessions, stigmatisms, and low blows, Griffith kept getting back up and eventually managed to live his life how he wanted: openly gay but not demonstratively so. He did not join the burgeoning gay rights movement in the U.S.A.

Born in 1970, Reinhard Kleist made his name early with graphic novel adaptations of the biographies of famous artists such as Johnny Cash (Cash – I See a Darkness, 2006) and Nick Cave (Mercy on Me, 2017), as well as of Fidel Castro (Castro, 2010). For many years he has been one the most important German graphic novel artists and storytellers. With The Boxer (2012) he already demonstrated how to transport the fascination for boxing into the graphic novel form. This tells the story of the Polish Jew Hertzko Haft who used his talent for boxing to survive the German concentration camps. Deploying expressive, high-contrast inking and a simple narrative style, Knock Out is once again an exciting, psychologically accurate character study of a boxer whose image has been, to this day, unjustly reduced to that of a murderer.

Ralph Trommer, Dipl. Animator, is a freelance writer and artist who is a regular contributor of reviews and articles on comics, graphic novels and films for a variety of media.

In his new graphic novel, "KNOCK OUT!", Rein hard Kleist looks at the American boxing world champion Emile Griffith, who rose to tragic fame when, in front of live television audience, he threw his opponent such a hard punch that he slipped into a coma, dying several days later. Before the deadly match, he had deeply offended Griffith with homophobic insults ...With his customary powerful brush strokes, Reinhard Kleist paints a sensitive portrait of a homosexual athlete who, in the macho world of boxing, was forced to lead a de-moralizing double life. It's the story of an unwilling fighter who nevertheless could not leave the world of money and fame. And it's the story of a knockout that ended one life and changed another forever ...