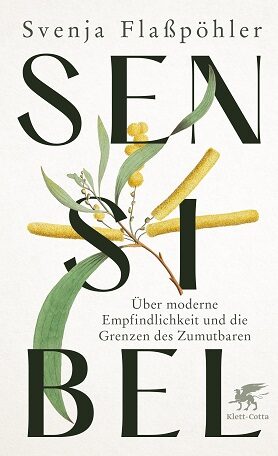 Svenja Flaßpöhler on the new sensitivity

The philosopher Svenja Flaßpöhler caused quite a stir in 2018. In her polemic Die potente Frau — “The Potent Woman”— she criticized the #MeToo campaign, which, as she saw it, portrayed women primarily as victims. In opposition to this, Flaßpöhler demanded — in pronounced and provocative terms — a new consciousness of active femininity and of the opportunities for action available to women.

In her new book as well, Flaßpöhler goes against the grain of the debates of our time. In Sore Subjects, she sets out to interrogate “sensitivity and the modern self.” What’s meant here is the so-called culture of “wokeness,” in which the world is viewed in the light of personal injuries and vulnerabilities. Someone who is “woke” tends to condemn all traditional relationships as being white and male-dominated, racist, colonialist, oppressive, and violent. With this stance comes the demand that in our interactions together we conform to this new sensitivity, not least in the arena of language.

But Flaßpöhler isn’t out to bash left-wing identity politics. Rather she postulates the existence of a societal rift between the “woke,” who like to see themselves as being as unique, delicate, and sensitive as snowflakes, and people with a neoliberal point of view who follow the old adage that every man is the architect of his own fortune: you just have to work hard, look out for yourself and toughen up, instead of constantly putting your own wounds on display.

Resilience versus sensitivity — this is the opposition that Flaßpöhler sees at the heart of our current debates. She is convinced that this conflict poses an extreme threat to societal cohesion. In her book she takes a cultural-historical approach in her aim to elucidate how these seemingly opposed positions are in fact connected.

In that sense, Flaßpöhler’s latest book is more conciliatory than the deliberately provocative Die potente Frau. Here she wants to set aside the polemics and hostile stances that mark the divisions between “woke and resilient” or “left and right” — all of them rough generalizations that obscure a more complex and varied situation — and show how our sensitivity has developed as a cultural achievement. To do so, the editor-in-chief of Philosophie Magazin heads to the bookshelf to consult the great figures of cultural history, literature, philosophy, and psychoanalysis in a manner that is both to the point and unpretentious.

A critic might note that it is primarily old white men that Flaßpöhler concerns herself with. She starts things off with the sociologist Norbert Elias, who in The Civilizing Process (1939) described medieval knights’ acquisition of court mores and manners. She contrasts in impressive style the unmannered, uncivilized, barbaric knight Johan of the 11th century with a present-day Jan who is his absolute opposite. Jan is considerate in every aspect of his life. He’s a vegan, of course; he’s also a teacher and uses non-gender specific language in the classroom. Like Johan the knight, he is described in playfully caricatured terms. Things get more in-depth when Flaßpöhler puts on an imagined debate between the philosophers Friedrich Nietzsche and Emmanuel Lévinas. Or when she writes about Samuel Richardson’s epistolary novel Clarissa from the mid-18th century, which for her is a #MeToo novel avant la lettre.

Her argument becomes particularly illuminating and pointed when she turns her attention to the feminist philosopher Judith Butler. Along with Butler, Flaßpöhler argues against new and increasingly differentiated identity labels, which pin a person down as being, for example, “non-binary,” “queer,” or “trans,” instead of keeping identity open as a continual performance, a kind of role playing, as Butler proposes. Here, too, Flaßpöhler defends the use of the generic masculine. Particularly within the context of a philosophical and dialectical discussion with Butler, this is refreshing to read.

It’s possible that Svenja Flaßpöhler underestimates those she describes as sensitive: these delicate “snowflakes” might not consider themselves to be nearly as weak and sore as Flaßpöhler portrays them. Not coincidentally, the image of the snowflake has a related image which is most certainly powerful, that of the avalanche. Nevertheless, this book gives readers a lot to think about when it comes to the ambivalent relationship between sensitivity, coercion, and aggression; the hidden links between tearful sensitivity and arrogant toughness; and the limits of language, which developed, not for private use, but as a broader means of communication and understanding.

Natascha Freundel is a journalist and editor at rbbKultur Radio, where she plans and moderates the podcast and radio debate program “Der Zweite Gedanke”. She also writes literary criticism and regularly serves as moderator at cultural events, including, among others, the German-Israeli Literature Festival in Berlin.

More than ever, we are busy readjusting the limits of what is reasonable. Where is the limit of what can be said? At what point does a touch constitute harassment? Svenja Flaßpöhler takes a step back and illuminates the conflict's glowing core: the increasing sensitization of the self and of society.

In human history, sensitivity equals progress: people protect each other in their vulnerability, become more sensitive to their own and others' feelings, learn to empathize with others' fates and to show solidarity with one another. But this development has a downside: instead of connecting us, sensitivity is fragmenting society. Are we experiencing the tipping point of progressive sensitization? Svenja Flaßpöhler tells the story of the sensitive self from a philosophical perspective. She illuminates the central controversies of our time and works out the reason for the precarious imbalance: Resilience is considered the enemy of sensibility because, still today, it is associated with cold entrenchment. But is that true?
Flaßpöhlerhas written a highly relevant, philosophical and at the same time entertaining book. Sensitivity is viewed dialectically until we reach the conclusion that resilience is in fact sensitivity's sister. They can only master the future together.