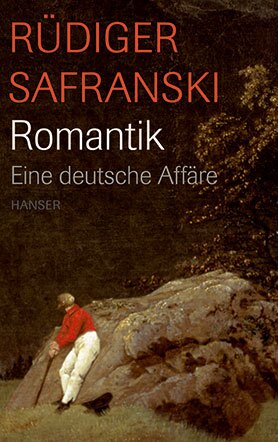 Published in Portugiesisch (Bras.) with a grant from Litrix.de.

When Hanser Verlag published a book of nonfiction last fall bearing the title Romanticism. A German Affair, public interest was large and for a simple reason. The book’s author is Rüdiger Safranski, and once again he has pulled off what few others are capable of: he tells a story. He tells us the story about something called romanticism, something we thought we already knew everything about. We don’t. The romanticism in this book strikes us with a freshness and vigor we never would have expected.

The roughly four hundred pages of text is divided into two parts, Romanticism and The Romantic. Safranski dedicates the first part to the period spanning the end of the 18th and the beginning of the 19th century, thus, to precisely the period commonly designated as romanticism. Safranski identifies essentially three events which, regarding Germany, served as the catalyst for this revolutionary cultural movement: Herder’s discovery of dynamic history, Schiller’s theory of play, and, of course, the French Revolution. Safranski is after more than simply drawing up a list of the period’s most influential poets and thinkers together with their works; he wants to capture the spirit which ultimately brought forth this vibrant spectacle of creativity and wealth of lofty theories, philosophical treatises, novels and poems.

The reaction against the Enlightenment, the calls for the autonomy of art, the shift towards the miraculous, the yearning for the secretive, the belief in the creative individual… Safranski conjures up all of these elements before the reader’s eye with his sheer ability to convey vividly even the most complex relationships. Likewise, even for readers familiar with the age, he colorfully illuminates Friedrich Schlegel’s progressive universal poetry and Fichte’s philosophy of the self, romantic irony in the works of Tieck and the magic realism of Novalis, Schleiermacher’s theology, and the famous gatherings in the Schlegel household in Jena. Safranski also exposes in a balanced manner the transformations that took place and the fissures which arose during the period. For example, he reveals how the mental horizon over the course of the romantic decades became more and more pinched, and he demonstrates how, based on Brentano and the Heidelberg romanticists, both a heightened interest in sagas, folk tales and the past, as well as the initial pursuit of universalism ultimately turned into patriotism.

In the second part, Safranski examines “the romantic mentality”. According to him, what originally emerged during the romantic period is still with us today. He tracks this mentality for more than a century, discovering it in Marx and Heine, the operas of Wagner, and in Nietzsche’s concept of the Dionysian. Following discussions of George and his circle, Hermann Hesse and Thomas Mann, Safranski focuses his attention on National Socialism and, towards the end of the book, the 60’s movement. Pivotal for the book’s second part is Safranski’s analysis of the much debated thesis that German romanticism abetted the catastrophe of the Holocaust – if not ultimately brought it forth, as historians such as Isaiah Berlin and Eric Voegelin have asserted.

It becomes clear no later than in the book’s second part that this is no traditional cultural-historical study. Anyone consulting Safranski’s “great story of romanticism” for dates, names and facts will be sorely disappointed, as there are, in fact, several things missing that a comprehensive treatment of the period would call for. As an explicitly European phenomenon, romanticism is unimaginable without the influences from other cultures – yet Safranski examines the period only with regards to Germany. Also omitted is the relationship of the individual arts to one other, so central to romanticism. Thus, painting is not mentioned at all, and music only in the form of Richard Wagner. Safranski further disregards the close contact between the natural sciences and romanticism, as well as the modifying self-perception of the movement’s female members and the artistic impulses they set free.

Yet to reproach Safranski for any of these issues would be to fail to recognize the book’s intent. By no means is he interested in adding another volume to the multitude of works already written on this period. When a declared specialist of romanticism such as Safranski takes on this topic, then it’s only because he wishes to deliver something new to the well-known debates. He achieves this in two ways.

First of all, Safranski succeeds in making the phenomenon of romanticism palpable. By skillfully alternating among biographic details, exciting plots, and vivid explanations of philosophical and aesthetic concepts of the period, he makes the entire romantic body of thought into something that can be directly experienced. And by doing so, it immediately becomes clear why romanticism, this “sequel to religion with aesthetic means” remains so attractive to us today.

Second, Safranski explores the relationship between politics and romanticism. With precision and sophistication he examines the criticism mentioned above, concerning romanticism’s role in the catastrophe of the Third Reich by providing it with a spiritual heritage. Safranski demonstrates to what extent the romantic mentality truly did abet National Socialism and also where its ideas and ideals were betrayed by a “steel-bodied romanticism”. But Safranski doesn’t stop at this point in time. Instead – and here the text is doubtlessly original – he goes on to show which romantic elements were incorporated into the 60’s movement and its terrorist malignancies of the 1970’s.

The book’s closing, in which Safranksi’s reconstruction of the romantic comes to be understood as a disposition of the mind, is as simple as it is convincing: “Romanticism is the surplus value” for a fulfilling life, as long as it keeps its hands away from politics. With his inspired and inspiring investigation Safranski has offered us a milestone on the subject of romanticism as one of the central and most productive periods, both theoretically and artistically, in German cultural history. Romanticism is a sheer delight for all wide-eyed readers who thrive on seeing things in new ways.