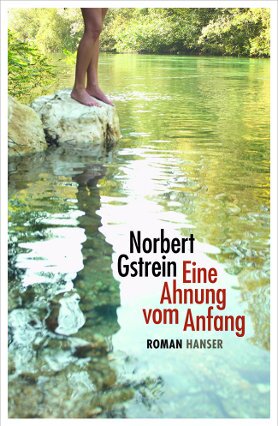 A behavioral experiment with pigeons showed that they become more obsessed with food the more irregular their feeding times. Readers of Norbert Gstrein are familiar with this phenomenon of “intermittent reinforcement”: the more sparing he is with the facts and the more he leads you down the wrong path, the more his story captivates you. Born in 1961 in Tyrol and now living in Hamburg, Gstrein, a trained mathematician, has proven before that he is master of subtle suspense, in his 2003 novel Das Handwerk des Tötens (The Craft of Killing), for example, or Die englischen Jahre, published in 1999 and translated as The English Years (2002). The latter refers to the Austrian Jew Gabriel Hirschfelder, who ends up in a London internment camp during World War II. “Caught between sleeping and waking,” a brainstorm of memories descends upon him. A similar narrative situation prevails in Gstrein’s most recent novel, Eine Ahnung vom Anfang (An Inkling of the Beginning), even in times of peace. The nameless narrator, a German teacher in Tyrol, is just as incapable as Hirschfelder of freeing himself from his memories – memories of his brother Robert, who killed himself, and of his onetime favorite student Daniel.

A fake bomb is discovered one day at the train station of a provincial town, accompanied by a Biblical warning to repent. The teacher seems to recognize Daniel on the wanted photo. This sets an inner monologue in motion, a whirlwind of flashbacks in the mind of this lonely man, the first-person narrator. “That summer ten years ago” becomes a kind of mantra for him, referring to the time he spent with his former students, Christoph and Daniel, and the shimmering atmosphere of pedagogical Eros linked to these encounters on the banks of the river. Together they renovate a run-down mill – an important locale in German Romanticism (one need only think of Franz Schubert’s “Miller Songs”). The teacher recapitulates a talk with a police inspector who dropped in from time to time at the mill: “When I started to tell him about it, I began to notice myself how lucky I had been, what an incredible gift these weeks had become for me over the years, how entirely out of time they were.”
What was “the gist of these hours at the river”? The teacher encourages his youthful summer guests to read Camus and Hermann Hesse, just like he’d done with his younger brother. Is he therefore partly to blame for Daniel’s becoming a religious fanatic? After all, math and religion were his favorite subjects, two fundamentally contrary disciplines. Why, when an American preacher and his extended family turned up in town, did the young man take the reverend and his dreams of salvation so seriously, even traveling to Jerusalem with them? The teacher, for his part, found the American quite simply “grotesque,” and wonders in retrospect if that was a mistake.

The story’s first-person narrator recalls the events of those days in vivid detail. He comes up with a number of theories, and devises a what-if scenario in the process. An atmosphere of latent danger forms almost unnoticeably, in stark contrast to his cherished summer idyll at the river. In the end, this novel of initiation – which has no real center – is as open as it is unexpectedly full of hope, not least of all because a woman is involved. Suspense mounts with every page thanks to the author’s considerable skills as a rigorous stylist and perfect draftsman, and to his healthy mistrust of ornamentation. Like no other German-language novelist of the present, Norbert Gstrein propagates the notion of literature as a challenge to our contemporary world.

​The author is a freelance literary critic and cultural journalist based in Munich and was a Litrix.de jury member for literary fiction from 2009-2012.