​The bear likes listening to the radio. In the process he picks up all kinds of information. He finds proverbs especially fascinating. He writes them down, but takes such a long time doing so that by the time he puts pencil to paper he has already forgotten part of the relevant proverb. New ‘proverbs’ thus come into being: ‘Ein Übel kommt selten allein’ (‘Misfortunes seldom come alone’) becomes ‘Ein Apfel kommt selten allein’ (‘Apples seldom come alone’); ‘Morgen ist auch noch ein Tag’ (‘Tomorrow is another day’) becomes ‘Morgen isst auch noch ein Tag’ (‘Tomorrow eats another day’).

The fact that his zany versions of the sayings are devoid of sense or coherence is completely lost on the bear — but not on his neighbours, the duck and his best friend, the lion. There’s no telling him, however, as he is so blissfully certain that he’s got it right, so the other animals simply shake their heads and sigh ‘Typical bear!’

These new stories for reading aloud by Hubert Schirneck turn out to be lovingly ironic tales that are often more ingenious in their development than their simple-sounding title might lead one to suppose. Thus the first story demonstrates right away that half-baked knowledge parroted from the radio does not make anyone truly clever. Again and again, the pieces of information that the bear enjoys listening to on his radio turn out to be seriously defective. It falls to the lion, and especially the lion’s friend Luise, to put him right.

Again and again, Hubert Schirneck has the lion call the bear’s claims into question, for he has made appropriate enquiries, and he knows that the bear’s proverbs don’t actually exist as such. Thus we see analytical thinking and the educative process in action.

Hubert Schirneck writes wonderfully clear prose in this book, prose that is well suited to being read aloud since the sentences are purposefully formulated and devoid of frills. What we see here is a writer operating with great sensitivity in a language world that is readily accessible to six-year-olds, yet at the same time full of charm — all the more so in that Schirneck manages in the numerous dialogues to give unmistakably distinctive voices to the bear and the lion.

Language is the real subject matter of these tales. Thus for instance Schirneck gives his readers some idea of how to handle metaphors by putting together a story about constellations. The bear aims to remove a constellation from the heavenly firmament and pin it to his wall. In the process he falls into a bear-trap, and looking up from the dark pit he suddenly discovers the constellations in the star-lit sky. The fact that no teacherly finger needs to be wagged here derives from Schirneck’s unwavering focus on developing his stories and steering them towards their clear-cut conclusion.

For Schirneck, taking metaphors and similar expressions literally is an approach that shows due respect for the child’s own perspective whilst also lending it an element of poetic comedy. Thus for instance the bear tries to discover what revenge is, since revenge is notoriously said to be sweet — and he is deeply interested in all things sweet. But instead of leading him into dramatic conflicts, this tale leads him into the arms of a lady bear; he duly falls for her, and the whole of the rest of the book is suffused with his longing for this highly agreeable girl-friend.

Schirneck never loses sight of the fact that he is writing for children. He carefully avoids the bleeding heart romances that far too often turn up in children’s literature in defiance of the fact that children of primary school age can’t really make anything much of ‘lurve’ — a phenomenon that is largely incomprehensible to them.

As he awaits the return of his girl-friend the bear begins to brood on things, and finds himself being ticked off by the lion. But the bear is sure of himself in this respect, and retorts that ‘people who brood have ideas, and ideas are a good thing’. He is quite right.

Hubert Schirneck doesn’t portray his bear as a ponderous sort: in full accord with traditional animal symbolism, which attributes energy and creativity to bears, this particular one has huge potential in terms of both imagination and the thirst for knowledge. What’s more, he is a spectacled bear, a fact that Sonja Bougaeva emphasises in her illustrations by a band of white across his face. The eyes are the key focal points in her animal drawings: they routinely convey a slight air of astonishment, and as such are clearly on the lookout for answers.

Hubert Schirneck encourages his readers to listen carefully and to ask questions — but he doesn’t bore them with instant answers. It’s an essential part of language to explore meanings and to experiment with them — a game that is entitled to enter the realms of nonsense now and again. Language is not only an instrument for the acquisition of knowledge: it is also a tool by means of which things in general can be brought into a state of equilibrium.

Hubert Schirneck thus manages to create animal stories that are gentle, funny and thought-provoking, but which at the same time surreptitiously offer a marvellous introduction to the magical realms of language. Anyone who has these tales read to them and is free to ask questions about them as and when they like is certainly going to be well equipped to deal with all the things that have to be learnt within the context of school. 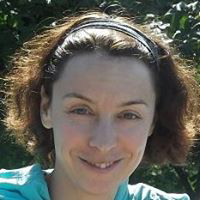 Two wishes compelled me to translate: I wanted to share the books I’d read with my friends and relatives, but not all of them had a command of the German language. So I thought the best way to talk about a book is to translate it. Later, I wasn’t able to stop after translating an excerpt of a literary text.
Essentially, there were two decisive events: A conversation with the translator Tatjana Baskakova, who believed in me, and participating in the German-Russian translation workshop “ViceVersa” (LCB).

What particularly drew you to this work?

The bear, who is the protagonist of the book, was particularly appealing to me. He is both imposing and very affectionate - a combination that causes him a lot of trouble. At the end of the book, we realize the story is precisely about these two attributes.

In this book, the content mainly emerges through the language. The bear, for example, loves proverbs but he often mixes them up puts different ones together. In the original German, he does this in a very funny and poetic way and my Russian version seemed a bit clumsy to me. Moreover, the translation needs to conform to the original images in the book. Had there been different illustrations, my bear would likely say something else at times. Even his life would have been different in some details: for example, his girlfriend wouldn’t be a buttercup (which is masculine in Russian), but a daisy.

My role as a translator is to reproduce, as precisely as possible, what I hear and see in the book. When I read a German book, I am directly involved in the action. I hear the voice of the narrator and the other characters. I see the characters, the plot and setting. My job is to reproduce the intonation, the colors and tones in Russian. This is my ideal - but in reality, I often lack the prowess, fantasy or time.

What do you especially appreciate about contemporary German literature for children and young people?

That’s a good question. I don’t really know much about the most recent publications for children and young people. I have always loved Christine Nöstlinger, whose books are now being published in Russia and people enjoy reading them. People also enjoy reading Paul Maar and Rotraut Susanne Berner in Russian. I am convinced that Janosch’s books are very important contributions to German literature for children and young people, but they been classics for a long time, and they also happen to be almost impossible to adequately translate into Russian.