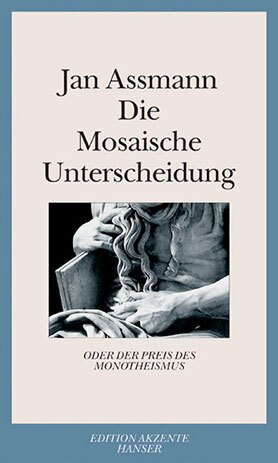 The three universal, monotheistic religions—Judaism, Christianity, and Islam—have a common tradition and a similar concept of God. Nevertheless, their history is marked by bitter disputes that have continued down to the present day. One thing that all three religions have in common is that in their beginnings, they were obliged to assert themselves against heathen surroundings. In the course of time, they transferred the concept of heathenism to their neighboring monotheistic religions so as to distinguish their own respective truth from the “falsity” of the others.

In his new book, in a simple and splendid scholarly language borrowed from Max Weber and Sigmund Freud, the Egyptologist and cultural historian Jan Assmann (who, along with his wife, Aleida Assmann, is internationally known for the theory of “cultural memory”) examines the roots and the consequences of the distinction between “true” and "false” in matters of faith, a phenomenon that did not exist in the premonotheistic world. Assmann calls this distinction the “Mosaic distinction.”

In this continuation of his book Moses the Egyptian (1997), he shows that in the history of memory, the introduction of a radical true/false scheme is bound up with the revelation at Sinai, and connected with the latter, the transition to the use of writing, which characterizes all the monotheistic religions. The polytheistic world integrated and assimilated foreign cults and deities. The monotheistic world, however, set the one true God over against the “idols of the heathens.” In doing so, monotheism in its radical form developed a sharp separation of world and God, a separation unknown to polytheism. Because polytheism is to be understood as belief in a divinely animated cosmos, Assmann calls it “cosmotheism.” In its beginnings, monotheism was a “counterreligion” to cosmotheism; it did not evolve from the latter, but rather arose through a revolutionary act of differentiation.

The earliest known example of a precursor to monotheism is the Aten cult under the Egyptian pharaoh Akhenaten, who lived in the middle of the fourteenth century B.C.E. The revolutionary introduction of an exclusive cult of the sun and its concomitant, brief abolition of the traditional Egyptian realm of the gods led to a cultural trauma. After Akhenaten’s death, his quasimonotheistic theology was obliterated and culturally suppressed, and his name was omitted from the king lists. Nevertheless, traces of Akhenaten can be followed through history. An immediate connection with the rise of Mosaic monotheism cannot be demonstrated, and this point is not a matter of concern to Assmann. Rather, the object of his study is the “traces of the recollection” of this early monotheism, from biblical, classical, and late classical antiquity down through the history of ideas to Sigmund Freud’s book Moses and Monotheism.

Without making value judgments, without idealizing cosmotheism, and fully conscious of the “progress in spirituality” (Freud) that monotheism signified for civilization, Assmann describes a mnemohistorical interaction between phases in which the Mosaic distinction was radicalized anew and phases in which residues of cosmotheism once again became culturally effective. The latter phases are the humanistic renaissances that have ever and again made their appearance in all three monotheisms. In the Freudian sense of cultural psychology, these are periodic returns of repressed cultural components. For Assmann, this is a matter of an “act of recollection that brings the repressed to light and primes it for processing, for ‘sublimating’ in the Freudian sense.

The Mosaic distinction—this is Assmann’s summation—must be made the “object of constant reflection and redefinition, if it is to remain for us the basis of a progress in humanity.”