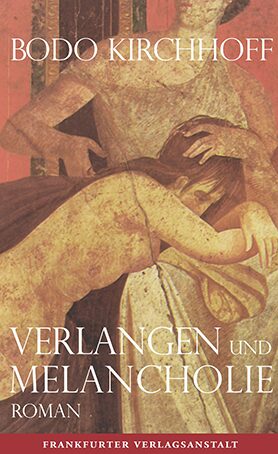 Bodo Kirchhoff is one of Germany’s most prolific and versatile authors born shortly after the Second World War. He has been publishing short stories and novels, plays and screenplays, essays and commentaries since 1979, and incorporates his personal experiences, enigmatic fantasies and political reflections into his prose. Kirchhoff has experimented with parodies of trivial genres, while traversing the limits of popular literature, and as so many reviewers have observed, he has achieved a remarkable artistic maturity as a novelist in the last few years.

This maturity is especially evident in his latest epic, Verlangen und Melancholie, a text for which he has discovered a new, complex, and dynamic narrative mode for subjects he has been focusing on since he first began to write: eros and death, desire and loss, deception and truth, and he does so in a linguistically unpretentious fashion. The author—who in the 1980s bid farewell to German locations and subject matter, who went searching for his material on travels around the world and residencies abroad—creates in this new story of love and revelation, a sharply nuanced image of contemporary German life, using incidents straight out of Kirchhoff’s hometown Frankfurt, wherein the closing of a Woolworth’s is tantamount to losing yet another piece of home. And he creates a subtle portrait of a generation of West German intellectuals, himself included, in which he exposes their vanities, relationship problems and incurable longing for Italy.

Hinrich, a retired editor for the local arts and culture section, lost his wife Irene almost ten years ago: She committed suicide by jumping from the Goethe Tower, a 43 meter high wooden structure in Frankfurt City Forest. The widower lives in a high-rise, the urban symbol of reviled postwar modernism, which he calls a “spaceship of mourning.” He consoles himself with animal films, tutors his grandson for his exams, and works part-time as an attendant for the Pompeii exhibition his daughter curated. He is constantly haunted by memories and tortured by unanswered questions that might explain Irene's suicide. The verbose retrospective recapitulation of their time together, predominately consisting of happy vacations, especially to Italy, and intense erotic moments, allows the reader—and this is Kirchhoff’s artistic ploy—to realize how little they knew about each other, without the first person narrator realizing as much himself.

In order to put Hinrich, the virtuoso of repressed feelings, on the right track of finding the truth, he needs to make a few detours: he decides to give his ex-Polish lover the dirty money he had smuggled out of Switzerland while on an adventurous journey across the Swiss border with his grandson. He travels to Warsaw to give the woman the money, and meets two old friends and colleagues, who reveal Irene's double life and the cause of her despair. The story gains an added dimension by the fact that one of the men, Jerzy Tannenbaum, is the descendant of deported Jews. Kirchhoff credibly integrates this plot point into the story, much as he does the mysterious letter with black border, which Hinrich had left unopened throughout the journey. We discover later it contains the news of his son’s death, whose existence he was completely unaware of.

Hinrich, spelled without the usual “e,” makes for a more elegant version of the name Heinrich.

One sunny day in May, Hinrich receives a letter with a black border in his mailbox. Who could have died? He doesn’t dare open the envelope. He has been living alone ever since his wife was killed falling from a 43 meter high building nine years earlier. His years working as a cultural correspondent for a major newspaper in Frankfurter are also a thing of the past.  Now his days are filled with memories of Irene, the beloved mother of his daughter Naomi, and a translator of sophisticated Italian literature. He recalls their trip to Italy one summer, the excursion to Pompeii, where they stood for hours in front of the famous frescoes of the Villa dei Misteri trying to unravel their secret. He remembers their love of cinema; how enamored they were of the moody black and white images, but also how they loved to be entertained. But the real question concerns what really happened nine years ago, before the fall. And what is contained in this letter with the black border? A trip to Warsaw provides a few explanations both about his life with Irene as well as with an ex-lover, and these answers turn everything he believed upside down.

Bodo Kirchhoff ‘s most recent major work, “Verlangen und Melancholie” [Longing and melancholy] is a subtly gripping novel that takes its readers on a quest for clues, one in which the hero slowly but inexorably uncovers the big question of “why,” and allows him to discover the truth behind his wife’s death. Bodo Kirchhoff also tells us about a kind of aging process in which wishes never age, of eternally youthful desire, and of a melancholy that ultimately is healing.